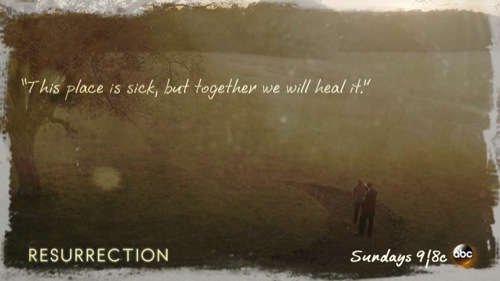 Tonight on ABC Resurrection continues with an all new Sunday January 11, season 2 episode 11 called, “Believer,” and we have your weekly recap below. Tonight things turn more ominous in Arcadia with the return of Preacher James, who seems to have a strange and unnerving connection to Bellamy [Omar Epps]. Elsewhere, Margaret’s [Michelle Fairley] presence is quickly felt at the government facility where she and other returned are being detained; and faith becomes harder to hold onto when the unthinkable happens to Henry.

On the last episode, as a violent storm hit Arcadia, knocking out all the power, Jacob went missing – along with Margaret, and The Langstons and Bellamy struggled to find them. Meanwhile, the tempest signaled the arrival of another visitor – a stranger (guest star Jim Parrack) with a mysterious link to Bellamy. Did you watch the last episode? If you missed it, we have a full and detailed recap right here for you.

On tonight’s episode as per the ABC synopsis, “the return of Preacher James brings an ominous new energy to the town, especially for Bellamy who seems to have a strange and unnerving connection to him. Now a detainee at the government facility, Margaret keeps to herself but her reputation precedes her and the other returned definitely take notice. Then the unthinkable happens to Henry which shakes everybody’s faith to their core.”

Tonight’s Resurrection Season 2 episode 11 is going to be exciting, and you won’t want to miss it. So be sure to tune in for our live coverage of Resurrection — tonight at 9 PM EST!

Tonight’s episode of Resurrection kicks off with Bellamy walking through the woods with Pastor James – he reveals that he saved Bellamy when he was a baby and he found him floating down the river in a basket. Bellamy don’t understand why he and James seen a vision and no one else did – suddenly Bellamy’s sister wakes him up and it is all a dream. Bellamy fills Maggie in on his dream, and Maggie tells him to just talk to him. Bellamy’s sister reassures him that Pastor James is a good guy and he even healed a man so that he could walk again. Bellamy thinks that it was all a scam.

At the diner, Fred and Henry are reading the paper. Fred urges Henry to go home and make up with Lucille already. Fred explains that Lucille feels like he chose their mom over her – and Fred needs to come to terms with the things that their mother has done so that he can make up with Lucille.

Meanwhile, their mom Margaret is at a government facility for the returns. She heads to the cafeteria, and all of the other returns are avoiding her and whispering about her. She sees a woman bullying another woman and stealing her glasses – Margaret takes the glasses back from the bully and gives them to the woman that can’t see.

Lucille and Jacob are out and about and they run in to Bellamy and his little sister Jane. Bellamy and Jane run off to play, and Pastor James is giving a sermon in the center of town. Bellamy and Lucille head over to check it out and Pastor James promises he is going to “show them a miracle.” He tells Mrs. Henderson to put her hand on the bible and look in to his eyes, Mrs. Henderson begins crying that her husband passed away two days ago. James tells her to close her eyes and picture her husband, he tells her to turn around and her husband Frank is standing there. Bellamy is shocked because he recognizes her dead husband from a dream he had with Pastor James in it. Everyone at the sermon begins passing around a hat and throwing cash in it for Pastor James.

Rachel shows up at the clinic and announces to Maggie that she is having contractions – Maggie is shocked because no one has seen her or heard from her in a while. Maggie checks up on her and says that she just had false labor signs. She tells Rachel that she will make some phone calls and find a place for her to stay until the baby is born.

Bellamy heads to the bar and joins Pastor James at a table – Bellamy tells James that he knows he is a con artist. James insists that Mrs. Henderson’s husband called to him to help him bring him back and he did. James point out that if he is a con artist – how are they sharing visions? Bellamy threatens him that if he keeps conning people he will send him away.

Henry finally caves and calls Lucille, he asks her to meet up with him in person so they can talk – she agrees to meet him alter that night at Twains. Meanwhile at the facility Henry’s mom Margaret makes a friend named Robin – the woman who’s glasses she saved from the bully. Robin asks Margaret if it is true that she killed a return. Margaret tries to kick her out of her room – but the woman begs her to help them organize an escape plan. Margaret shocks her by informing her that she doesn’t want to escape.

Lucille heads to Twain’s to meet Henry, but he is fifteen minutes late. Bellamy has a vision of Henry inside the police station – Henry thanks him for bringing Jacob back to them and then disappears in to thin air. Outside of the police station Fred and Bellamy hear car horns honking. They rush outside and find Henry dead in his car in the middle of the street – he appears to have had a heart attack. Fred is distraught over his brother Henry’s death, Maggie sobs to Bellamy that it isn’t fair because he just got his son back – as the ambulance takes his body away. Fred heads to Lucille’s house to tell her that Henry passed away. Lucille seems to be delusional though – she isn’t upset about Henry’s death, because she knows he will return, and she thinks Pastor James will help him.

Rachel heads to the bar and agrees to wait on tables in exchange for room and board upstairs – Elaine tells her that she saved her brother’s life so she owes her a lot more than just a room.

Meanwhile, Lucy and Fred head to the church to meet with Pastor James. He reassures them that he will bring Henry back – but they have to do something for him. James insists he doesn’t want money, he wants them to bring him Bellamy.

Maggie, Fred, Lucille, and Jacob all corner Bellamy and beg him to go see Pastor James so that they can have Henry back. Bellamy finally caves and heads to the church with Fred. He screams at Fred that he can’t bring Henry back and neither can he – and it was wrong of him to tell the Langstons that he could. James kicks Fred out, and tells Bellamy that he can’t be afraid to let God speak to him. He wants him to believe in himself and trust his feelings. Pastor James talks to Bellamy about his vision and Bellamy realizes that he came back for a reason.

Bellamy, James, and Fred head out in a field where he has drug a grave. James tells them that one of the has to shoot him so that he can go to another world and get Henry. Bellamy refuses and says that it is insane – but Fred pulls out his gun and shoots and kills Pastor James. They sit at his grave for hours and nothing happens, they decide to go back in to town and split up and look to see if Henry or James has returned.

After driving around all morning – Fred and Bellamy decide that James is just a con artist and there is no way he could come back with Henry. Fred decides to call Margaret and tell her that Henry is gone for good – she seems unfazed by the news. Rachel and Elaine heads to the cemetery to visit Tom Hale’s grave.
Bellamy and Fred head to Lucille’s house to tell her that Henry isn’t coming back. While they are breaking the news to her there is a knock at the door and James and Henry are standing on the front step.