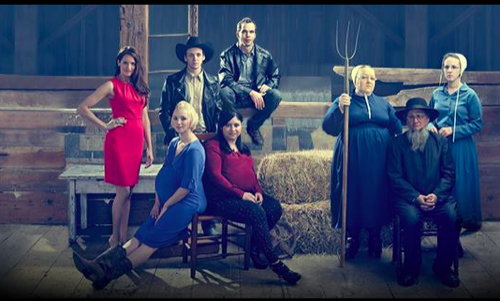 Tonight on TLC Return to Amish, the Breaking Amish spin-off airs with an all new Sunday June 28, season 2 episode 5 called “Other Side of the Fence,” and we have your weekly recap below! On tonight’s episode, Kate saves the day when another guest arrives at the bed-and-breakfast; Abe helps an Amish escape to the English lifestyle.

On the last episode, Mary had unexpected guests before the bed-and-breakfast opened, so she treated them to a real Amish experience. Meanwhile, Rebecca had a confrontation with Jeremiah, who responded by reaching out to Katie Ann. Did you watch last week’s episode?  If you missed it we have a full and detailed recap, right here for you.

On tonight’s episode per the TLC synopsis “Kate saves the day when another guest arrives at the bed-and-breakfast; Abe helps an Amish escape to the English lifestyle; Mary gets tips on improving her health; Chapel visits Andrew; Katie Ann makes a big decision at the rodeo.”

Mary was still firm on selling the whole Amish experience on tonight’s episode. Though, luckily, she did pick up a few things her children had tried to tell her last week. And with some much needed changes coming into effect, Mary’s B&B was finally able to get off the ground.

Instead of forcing her guests into doing everything a typical Amish person would be expected of, Mary granted them a choice.

All that she did ask, though, was for her guests to give up their cell phones and change their very English attire. So she still gave them an Amish experience but it was more like Amish lite, with participation around the house or farm (rather than grunt work) being an option.

And their first guest after their previous disaster went on to enjoy herself.

She was a bit fazed when her phone was taken away. But the fact she was fed (unlike the others) and that she willing joined the other women in baking is probably what gave her a different perspective. All in all, Mary’s latest guests enjoyed a very relaxing break. And they told Mary that they would spread the word about her place.

Thus, Mary finally got the success she always wanted.

But, like many times before, the kids just couldn’t allow her to relax for long. Because if it wasn’t her B&B, then it had to be something they did when she wasn’t looking. And what with Andy in jail – Abe should have known better than to bring drama to Mary’s front door.

Abe has apparently been helping out his friend Raymond who wants to live in the Amish community. And while that was a big decision on his part – one he had to make all on his own – Abe might have been too helpful. For not only did he tell Raymond what he needed from his parents (his birth certificate and his social security card), but he might have hid his friend in the barn at the B&B.

And he admitted to knowing that was something his mother wouldn’t stand for!

If he knew it was wrong, then why did he do it? Mary is on the fence about letting children leave the Amish and, though she’s been understanding of her sons and their friends, Abe knew how worried she was about her own daughter wanting to leave. Katie-Ann wouldn’t need any further enticement.

However, the sad reason, at least for the deception, is that many of the Amish have no one when they leave. Abe was fortunate to have Rebecca, Kate, and Jeremiah but not everyone is so lucky. So if Abe hadn’t stepped in, then it’s possible Raymond would have had nowhere to go.

Raymond’s parents were angry when he asked for his identification and in fact he had to call the police on them in order to get them to hand over his birth certificate.

It’s going to take some time for his parents to forgive him. In the meantime, Abe is literally all he has.

Katie-Ann, on the other hand, is one of the lucky ones. For she has her siblings and friends. Abe and Rebecca have both been very supportive of her leaving. Though this week Rebecca took her support a step farther. As in she took Katie-Ann down to the rodeo to show the younger girl what she was missing out.

And later when Mary asked about the second car on Abe and Rebecca’s property, the couple then tried to lie for Katie-Ann by claiming the car belonged to a friend. But neither of them had known their own daughter had ratted them out.

Earlier, when Kayla was playing with Mary who was baby-sitting her at the time, she ended up telling her grandmother everything. She said Katie-Ann had a car and she stuck to that story even when her parents came back and then attempted to lie in front of her.

Though, generally, when she catches the kids in the wrong, they don’t then turn around on her.

Katie-Ann came clean about what she wanted and she told her mom that she wanted to be English. For the last couple of months, she’s been going back and forth, but this time it seems serious. And she’s no longer worried about protecting her mother’s feelings.

Because no matter what Mary said to try and convince her to stay – Katie-Ann had already made up her mind.

She was leaving and it looks she came up with a very good plan to see it through.

Abe had left, Andy had left though he’s currently in jail for the umpteenth time (and also possible heading towards a divorce if not legal separation), and now Katie-Ann is gone. Mary is going to develop quite a reputation in her community. And she knows in advance that neither the Bishop nor her husband will pleased with what happened to her latest child.