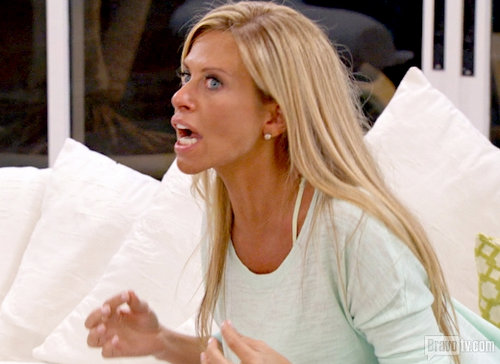 Real Housewives of New Jersey star Dina Manzo has a new boyfriend – and she isn’t exactly doing herself any favors if she is trying to shake her gold-digger and home-wrecking reputation. So, who is Dina Manzo dating? According to a new report, Dina is dating wealthy businessman Dave Cantin – despite the fact that she is still technically married to her soon to be ex-husband Tommy Manzo.

According to an all new report from E! News, Dina and Dave are definitely a “thing.” Cantin opened up to the Daily Mail about his relationship with the former Real Housewife of New Jersey, and revealed that he too currently underwent a divorce. And, he is a cancer survivor – he is healthy and in remission now, but he credits Manzo for helping him get through his dark days. Cantin insists that he met Dina Manzo in January 2015, after he had already filed for divorce – and she was in no way what caused his marriage to his previous wife to fall apart.

How does Tommy Manzo feel about his wife Dina’s new boyfriend? Well, he doesn’t seem to mind at all. Tommy reported to Daily Mail that although he and Dina are still technically married to each other, they have both moved on with their lives and he too has a new girlfriend – he didn’t go in to detail about the lucky (or unlucky) lady. Tommy dished, “we are currently going through finalizing our divorce hopefully in the next few weeks. We’ve moved on with our lives.”

Sadly, it doesn’t look like Dina Manzo will be returning to Real Housewives of New Jersey any time soon, so we won’t get to see the divorce and her new romance unfold. What do you think of Dina’s new boyfriend Dave Cantin? Is it the real deal, or does their relationship have a short shelf life? Let us know what you think in the comments below!