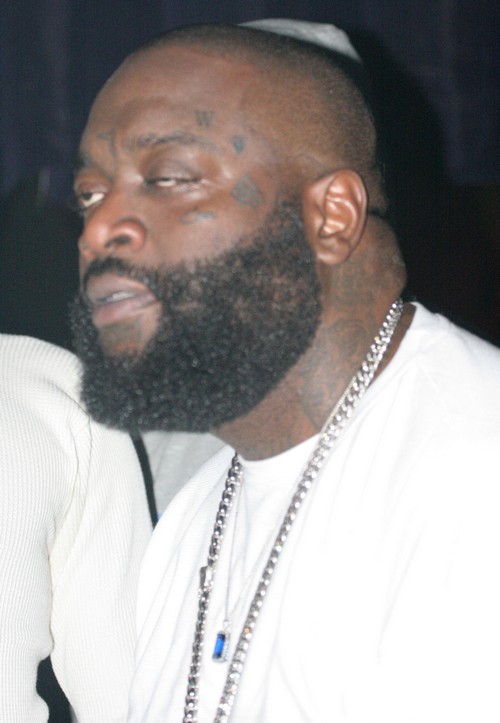 Over the weekend, Rick Ross found out that 50 Cent had been selling t-shirts with a photo of the “B.M.F.” rapper’s tattooed chest online. To add insult to injury, the price on the Rick Ross ripoff shirts was just $2.95. Well rather than hit 50 Cent up with some copyright or trademark lawsuit (and to be honest that might be in the works) Rick Ross jumped on Twitter and started clowning 50 Cent for the new line of business.

Rick Ross tweeted, “Forced into #BANKRUPTCY now the Donkey @50cent WORKING 4 #MMG Merch co. selling T’s for 2.95 on the #BLACKMARKET haaa!” Ross wasn’t making things up. 50 Cent really did file for bankruptcy in July, but only after Rick Ross’ baby mama sued the “In Da Club” rapper and won to the tune of $5 million.

Ever since 50 Cent lost the lawsuit over his intentional leak of Lastonia Levington’s sex tape, the rapper has been trying to convince everything that he is broke. 50 Cent is trying to claim that he doesn’t even have two nickels to rub together so he shouldn’t have to pay the lawsuit even though it’s obvious that the rapper is not poor.

50 Cent is never one to take the high road and he didn’t change his style up in this case either. Instead, he responded to Rick Ross by posted a picture of the rapper wearing his old corrections officer uniform. The caption read, “Ok this is a good movie 😆 a correctional officer who raps like a drug dealer till he believes it then” on Twitter.

50 Cent has been criticizing Rick Ross for his previous occupation for years now. In turn, Rick Ross has certainly taken advantage of 50 Cent’s $5 million judgment and has thrown a few zingers about the rapper making payments to his own baby mama.

The Instagram version of the message has been deleted but the Twitter link to it has not. The full text of 50 Cent’s caption read, “Ok this is a good movie: A correctional officer who raps like a drug dealer till he believes it.

Then kidnaps and beats his grounds keeper as his record sales dwindle to nothing. So he marries a 22 year old stripper his crew already ran threw to make sure someone will visit him. LMAO. Wait I want to buy the movie rights.”

50 Cent isn’t usually one to back down so we’re not sure why he decided to take the Instagram picture down. One thing he has to remember though is that the internet doesn’t forget and screenshots abound. Oh, and he forgot to delete the tweet about it with the link to the now-deleted photo.