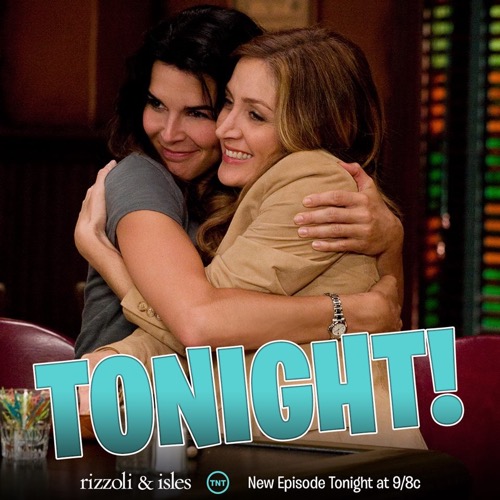 Tonight on TNT RIZZOLI & ISLES returns for another all new Tuesday February 17 season 5 episode 13 Winter Premiere called “Bridge to Tomorrow,” and we have your weekly recap below. On tonight’s episode, Maura [Sasha Alexander] is worried she’s lost her best friend after Jane [Angie Harmon] jumps from a bridge to save a prosecutor suspected of murder. Meanwhile, Angela [Lorraine Bracco] seeks a new job.

On the last episode a notable county prosecutor (guest star Jamie Bamber) was arrested for murder, and as the case against him grew increasingly strong, Jane began to doubt he did it. Angela nominated herself to educate Maura on the interests of kids today when she heard Maura was going to meet Jack’s 12-year-old daughter. Did you watch the last episode? If you missed it, we have a full and detailed recap right here for you.

On tonight’s episode as per say the TNT synopsis, “after Jane jumps from a bridge to save a prosecutor suspected of his murdering his mistress, Maura is terrified that she has lost her best friend. The squad must now renew the search to find the real killer. Meanwhile, Angela enlists Frankie’s help as she applies to new jobs.”

Tonight’s episode of Rizzoli & Isles picks up where we left off last season – Maura is describing what happened on the bridge and the events leading up to Jane diving in to the river to save their suspect. The next morning, Jake and the suspect, Paul, still haven’t been recovered. Korsack thinks that Jane may have been able to swim to one of the islands in the harbor and they are checking them now – if not, then the currents could have taken her out to sea.

Korsack heads to Paul’s house to fills his wife in on what happened. When he arrives the front door is wide open. He finds Paul’s wife drunk on the couch – where she has been drinking away her sours since Paul was arrested for murder. Korsack tells Mrs. Westcourt that they are searching for Paul and reveals to her that they don’t think Paul killed Danny Mitchell. His wife doesn’t care, regardless of whether he killed her – he lied and embarrassed her and for all she cares he could drown.

Frankie receives a phone call that the fishermen found something in the water – Frankie, Korsack, and Maura rush to the boat. They have found Jane and Paul, and they are both alive. Maura hugs Jane and then snaps at her that she will see her later and storms off. Maura is still obviously upset with her for jumping in to the river and scaring every one.

Jane heads home and her mom lectures her about umping off a bridge in to the river, and she explains that Maura has a right to be upset. Her mom isn’t angry though, she has gotten used to worrying night and day over her kids at their jobs. Jane whines that her that her mom should be proud of her and Frankie, and that they lay their lives down for the greater good every day. Jane’s mom insists she isn’t upset and then says she has to go get ready for a job interview – she refuses to tell Jane what the interview is for.

Jane heads to the office and Maura is still giving her the cold shoulder, she gives her a gift and they chat about Jane jumping off the bridge. Jane explains that she couldn’t worry about her friends and family and what they would feel like if anything happened to her – in the moment she had to worry about Paul and stop him from drowning. Maura understands, and she explains that she feels guilty because she didn’t save Paul or Jane or stop them from going in to the river. Jane reveals that she was petrified when she was in the water and all she could think of were all of the things that she still wanted to do in life – like make ravioli.

Now, it is time to solve Danny Mitchell’s murder – and clear Paul’s name. Maura heads to the morgue to re-examine Danny’s body and look for clues they may have missed. Jane sits down with Paul and questions him and asks him if there is anyone he can think of that would have want to set him up and frame him for murder. Paul has no idea – he insists that no one knew about him and Danny’s affair. But, one night he did feel like a car was following him, it was a little red or burgundy economy car.

Korsack reinvestigates Paul’s wife’s alibi – which is rock solid. Her cell phone pinged the tower from her house, and she was online playing a live game with someone in London. Korsack ask Jane if she is sure that Paul is innocent – because they can’t find anything that would prove otherwise.

Frankie heads out to lunch with his mom Angela, she reveals that she is going to an interview for a great job as a manager of a high-end restaurant. She needs Frankie to help her practice for her interview. Frankie agrees, but he is worried that they won’t give her the job because she doesn’t have any experience working at a high-end restaurant.

Jane stops by Maura’s office, and she is feeling inspired by Jane’s near-death experience and decides that they are going to make Bucket lists together. Jane begrudgingly agrees, and Maura reveals to her that she found something on Danny’s case. Maura noticed that Danny Mitchell’s killed gave her a hair cut and she thinks they have a copy-cat killer on their hands. Paul’s last case was on a killer named Mark – who he put away for murder, and his victim’s hair was cut as well.

The next day Korsack heads to the prison to see Mark – he reveals to him that there is a copy-cat killer out there that copied his murder and even cut the hair as a trophy. Mark says he didn’t have an accomplice, but there was a woman named Sarah Daniels that wrote him letters and he leaked the details of the murder to her, and even told her about cutting the woman’s hair as a trophy. Mark says that Sarah Daniels hated the DA Paul.

Maura analyzes Mark’s prison letters, and they don’t find anything helpful. Nina stops by to pick up the letters and chats with Maura, Nina confesses that she left Chicago because a 14 year old kid killed her husband so that he could get inducted in to a gang. She gets a little choked up and explains that she left her beat in Chicago because she couldn’t protect the one person that she cared about most, her husband.

Angie heads to her interview, and she is seated in a room full of girls half her ago who are all gunning for the same job. One of them actually thinks that Angie is one of the other girls’ mothers. Angie heads in to meet with the restaurant’s owner and try to woo him with her charm.

The police bring in Sarah Daniels – Jane and Korsack are baffled when they meet Sarah in the interrogation room and see that she is in a wheel chair and has been crippled since she was in high-school. Someone stole her wallet three months ago, and her driver’s lisence – it must have been the woman that was visiting Mark and that is how she posed as Sarah. Sarah explains that her license was stolen while she was at therapy on Broad Street, Jane notes that is just around the corner from Paul’s office.

Frankie meets up with his mother for lunch and Angela reveals that the interview went well but she didn’t get the job because they were looking for someone with a college degree. Frankie comforts her and tells her that he is proud of her for going after the job, he reassures her that there is an employer out there who will appreciate her life experience.

Korsack gets a lead on Paul’s case, apparently Paul’s wife Carol went to see her psychiatrist who is in the same office as Sarah Daniel’s therapist. And, Jane found a credit card receipt proving that a few months ago Carol rented a red economy car – the same one that Paul seen following him and Danny. Now, they just have to crack her alibi. They pull up the footage form her online chess game the night that Danny was killed and realize that is is computerized and Carole pre-programmed her moves to make it seem like she was at home at the time.

Jane meets with Paul and tells him that his wife Carol knew about their affair for months and she was the one in the red economy car – Paul breaks down and cries and says that he didn’t want it to be true. Now, he blames himself for Danny’s murder, because his wife did it to punish him.

Paul heads to Carol’s house and cries to her that he is sorry – Carol snaps on him for having an affair with Danny and betraying her. Meanwhile, Jane and Korsack listen in on their conversation from the car, Paul is wearing a wire. Inside Carol turns the radio up and laughs that she knows Paul is wearing a wire and pulls a gun on him, Jane and Korsack rush in and save Paul and arrest Carol. Paul picks up the gun to shoot his wife – but Jane is able to talk him down. She reminds him that she jumped off a bridge to prove that he wasn’t a murder, and she doesn’t need him turning her in to a liar now.

After work Jane heads to Maura’s for drinks – Maura surprises her with a present, a pasta maker so that they can make ravioli. They exchange the Bucket Lists that they made.