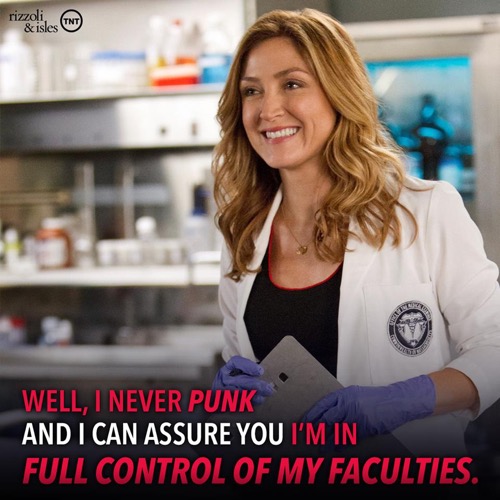 Tonight on TNT RIZZOLI & ISLES returns for another all new Tuesday February 24 season 5 episode 14 called “Foot Loose,” and we have your weekly recap below. On tonight’s episode, a severed human foot washes ashore, triggering the squad’s investigation.

On the last episode after Jane jumped from a bridge to save a prosecutor suspected of his murdering his mistress, Maura was terrified that she had lost her best friend. The squad had to renew the search to find the real killer. Meanwhile, Angela enlisted Frankie’s help as she applied to new jobs. Did you watch the last episode? If you missed it, we have a full and detailed recap right here for you.

On tonight’s episode as per say the TNT synopsis, “a severed human foot washes ashore, triggering the squad’s investigation. Meanwhile, Angela’s search for a job proves unsuccessful, so she helps Korsak at the Dirty Robber.”

Tonight’s fourteenth episode of Rizzoli & Isles season 5 looks like it is going to be great and you won’t want to miss it, so be sure to tune in for our live coverage of Rizzoli & Isles at 9:00 PM EST! While you wait for our recap hit the comments and let us know how excited you are about season 5 of Rizzoli & Isles? In the meantime, enjoy a sneak peek of tonight’s episode below.

Tonight’s episode of Rizzoli & Isles kicks off with a guy and his girlfriend on the beach. He dives in to the cold ocean, but his girlfriend refuses to join him. He finds a sneaker floating in the water and throws it at her. But, when it lands in the sand she begins screaming fanatically because the shoe still has a human foot in it.

Jane and Maura are at Korsack’s bar with Angela, she is depressed and moping because she can’t find a job. She whines that she has sent out 37 resumes, and only got one interview – and they turned her down because she was too old. Korsack, Maura, and Jane’s phones all go off at the same time and they rush out leaving Angela there to hang up posters by herself. A young girl shows up with a resume and says she is only 22 years old and she is looking for a job.

Korsack, Maura, and Jane arrive at the beach where the foot is lying in the sand. Korsack thinks that the foot probably belongs to a drunk sailor that fell off the boat. They bicker over how the foot was cut off from the leg – Korsack thinks that it was bitten off by fish. Maura points out that ocean water can cause body parts to erode because of the salt.

Back at the lab Maura reveals to Korsack that the foot was sawed off a body – and it was in the ocean for less than 24 hours. So, a killer was disposing of a body. SO far no people or feet have been reported missing in Boston. In the other room Frankie and Nina are going through photos of body parts that have been dumped in the ocean on the East Coast for the past ten years. Korsack interrupts and says that another body part has washed up on the beach – this time it is a torso.

Korsack, Jane, and Maura arrive at the beach and the torso is literally nothing but a torso. It was sawed off at the waist, has no arms, or neck. While they are investigating it a news crew arrives and demands to know if there is a serial killer in Boston. The news crew also beat them to the scene when there was a foot found. Jane announces that there is a leak in the department – and they need to find out who it is. Maura takes the torso back to the lab, while she and Jane are investigating it Maura begins shouting at her to get out. She smells almonds – which means that there is cyanide in the body. The lab is shut down and men in hazmat suits arrive to clean up the traces of cyanide. Maura gets an email back from the lab where she sent the tissue sample and confirms that the cause of death was cyanide poisoning.

Once the cyanide is cleared out, Maura heads back to work. Jane checks in on her and she has bad news. She ran a blood test and the foot and torso do not match – there are two different victims’ bodies floating around in the ocean.

The police trace the torso and find out it belongs to a missing man named Richard O’Connell, his parents are on his way in and Korsack agrees to break the news to them. Nina finds the leak in the police station, Jane marches down to their sketch artist Jim’s office and demands to know why he was leaking info on an active murder case. Jim whines that he was just “discussing work stuff” with his cousin, who happens to run a crime blog. Meanwhile upstairs Korsack is talking to Richard’s parents, they say that Richard was an avid swimmer but he had a spinal degenerating disease. Richard stopped taking his medicine and doing his exercises because he met a healer named Mark Murray that brainwashed him. Richard disappeared a month ago and hadn’t been answering their phone calls.

Korsack, Frankie, and Jane arrive at Mark Murray’s office and it has been deserted – they do find blood on the floor and a bloody saw lying next to it. Korsack goes through Murray’s computer, they find his appointment book and learn that he had an appointment with a man named Russ Pfeiffer. They call Russ in for questioning and he reveals that he had never been to Mark’s office before and today was his first appointment. He said that he met Mark’s assistant, he said Mark was a “miraculous healer” and he cured his cancer. Russell says he never got the assistant’s name.

They do some digging on Mark Murray and find on one of his business licenses that his assistant’s name was Bob Burke. They head out to question Bob Burke, and the EMT’s beat him there. Apparently the neighbor called 911 when she found Bob outside lying on the ground. Jane tries to question him about Mark Murray while the paramedics work on him, she realizes that he smells like almonds and he has cyanide poisoning – the paramedics clear the area around Bob and tell everyone to get back.
Jane heads to the hospital to question Bob Burke, he explains that he thought Mark Murray was a genius and he cured people with sound waves. But, then something happened – two of his patients didn’t respond to his treatment and didn’t get better. So, Mark Murray killed them so that no one would know that he failed at healing them. Then Mark came over to his house and dumped cyanide down his throat and poisoned him so that he wouldn’t tell anyone the truth.

Maura arrives at the hospital and is suspicious of Bob when he won’t let them run any tests on him and refuses treatment. She sends an assistant over to his apartment to analyze his vomit. Maura calls Jane and informs her that Bob Burke played them, he never had cyanide poisoning – he just swallowed a slew of almond extract to pretend that he did. Meanwhile, Jane and Korsack are at Mark Murray’s office, they find one of his shoes and it matches the one that washed up on the beach.

The reason they can’t find Mark Murray is because he is one of the bodies in the ocean.

Frankie rushes to the hospital room where Bob Burke was staying – he finds an orderly in the hospital bed bound and gagged. Bob Burke overpowered him and tied him up in bed and ran off. They put the hospital on lockdown to try and find Bob Burke, who is currently parading around dressed as a security guard. Little does Frankie know, Bob Burke has already left the hospital. Jane and Korsack arrive and find him in the parking lot, Korsack pulls a gun on Bob, he hops in a nearby car where Jane is waiting for him. She arrests him for the murder of Mark Murray and Richard O’Connell.