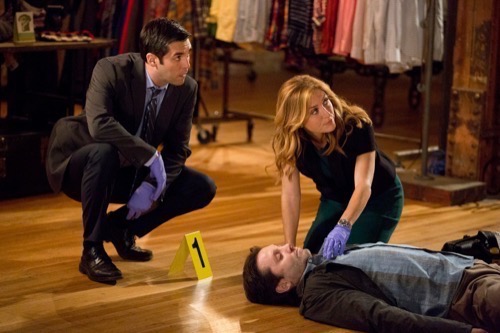 Tonight on TNT RIZZOLI & ISLES returns with an all new Tuesday, March 10 season 5 episode 16 called, “In Plain View,” and we have your weekly recap below. On tonight’s episode, a man is bludgeoned to death on the side of a road.

On the last episode a clothing designer was found poisoned and his wife reported missing, bringing the squad together with a gung-ho private detective to investigate. Elsewhere, Jane enlisted Maura to help Angela with her finances. Did you watch the last episode? If you missed it, we have a full and detailed recap right here for you.

On tonight’s episode per the TNT Synopsis, “a man is bludgeoned to death on the side of a road, prompting the squad to join forces with another detective who may be investigating the same roadside killer. Elsewhere, Maura’s identity is stolen, so she reaches out to Angela for help.”

Tonight’s episode of Rizzoli & Isles kicks off with a man driving down a dark road at night, and listening to the radio. His car breaks down, and he gets out and pops the hood. While he is taking out his cell phone to call for help someone pulls up in an SUV. The man walks up to him and beats him to death with a crowbar and then gets back in his SUV and leaves.

Jane stops by Maura’s house in the morning – she picks up Maura’s mail for her and brings it inside. She is shocked to see her counter already covered in junk mail and catalogues. Maura grumbles that she used to be on a “no junkmail list” but apparently she was dropped from it. Maura opens the package she got in the mail – it’s a pair of women’s shoes and they aren’t even her size. She is baffled because she hasn’t been in the boutique for years – but she loves the shoes so much she is going to stop at the boutique and exchange them for her size.

Maura, Jane, and Korsack head to the murder scene. Todd Reynolds was reported missing by his wife when she realized that he never returned home from working the night shift. They find him beaten to death and laying in the road exactly where the man left him. Jane is baffled because his car turns on without any problems – they have no idea what made him pull over and get out of his car. Maura checks out the body and says that he has been dead 8 hours, she says that he was beaten to death with a blunt object. Jane finds a white handkerchief a few feet away from the victim on the ground with blood on it – she thinks they may have caught a break and it belong to the killer.

Jane heads to Todd’s house where Frankie and his team are searching his home office. Jane sits down with Todd’s wife Frances – their 10 year old son Logan is outside playing on the swing set. Frances cries that she doesn’t understand why anyone would kill her husband. She explains that every night he comes home around 2:00 AM, she says her husband didn’t sure drugs, he barely drank, and he wasn’t having an affair. Frances says that Todd was working around the clock to pay their bills because she lost her job, there was no way he had time to have an affair. Jane heads outside to talk to Todd’s son Logan, he says that a strange man came to their house two days ago – but Todd kept it a secret from Frances. Logan says that the man was yelling, and Todd threatened to call the police so he left. Logan doesn’t know what the man looked like – but he says that he will never forget his voice.

Jane goes to the morgue and tells Maura that Todd’s son can recognize the killer’s voice. Todd’s toxicology test came back negative and there were no indications of any recent sexual activity. Maura says the murder weapon was a long mental instrument, possibly an iron pipe or a tire iron. There were no defensive wounds – so Todd most likely knew his attacker.

Korsack interviewed Todd’s co-workers and they confirmed he left work at 2:00 AM. They found a receipt in his car revealing he went to a store at 2:20 AM. Korsack doesn’t think that Todd was screwing around on his wife. They pull Todd’s credit card reports, they took out a second mortgage six months ago. There were two mysterious cash deposits in his bank account last month, they think Todd may have went to a loan shark.

Maura heads to the boutique, the woman apologizes for sending Dr. Isles’s shoes to her house. She shows Maura an entire rack of dresses that Dr. Isles picked out and were waiting to be picked up. She seems completely unfazed by the fact that someone seemed to have stolen her identity, she asks the clerk if the dress comes in her size.

Korsack and Frankie bring a local loan shark named Chris in for questioning. He admits he loaned Todd $15,000 but says that he never threatened to kill Todd. Jane has Todd’s son Logan come down to the police station and listen to the loan shark’s voice – Logan says that he is not the man that came to their house and screamed at his dad.

Maura heads back to work and tells her assistant about her “impostor.” Her assistant warns her that she is just an identity thief stealing her money – and she needs to report her to the police. Maura wants to see the impostor first, she made a reservation on one of Maura’s credit cards at a restaurant. Maura is going to go to the restaurant to see who the impostor is.

Jane gets a call from Maura and heads to the garage where Todd’s car is. Maura noticed that the blood spatter is not on the hood of his car – she thinks that the hood was open when Todd was killed. She finds a sock stuffed in his gas tank, they realize that the killer had to have sabotaged Todd’s car and was waiting for it to stall and followed him, and then killed him.

A detective named Mike Guthrie from Maine arrives at the police station – he tells Jane that they are searching for the same killer. Mike explains that they have an open case, a 60 year old woman named Ruth was found brutally killed on the side of the road next to her car. They also found a sock crammed in her gas tank, and she stopped at the same kind of market that Todd stopped at right before he was killed.

Maura and Angela head to the restaurant to observe her impostor – Angela whines that they need to call Jane. Angela says that it is not an impostor that wants to be like Maura, the woman is just a con-artist with her credit card numbers. Maura complains that she has been reading her credit card bills and she is jealous of all of the stuff that the con-artist has been buying with her money. An old man at the restaurant begins having a heart attack – in the commotion the impostor tries to rush out of the restaurant but Angela snaps a photo of her. Maura heads back to the police station and Jane knows what she has been up to – she already filed a police report for her credit card theft for Maura.

Jane rushes to the lab and Maura tells her that all of the evidence has been contaminated. They learn that the fire started in the men’s bathroom, someone threw a lit cigarette in the garbage can. Jane and Korsack check out the fire in the trash can and realize that the cigarette was never smoked and someone threw it in the garbage can to start the fire. Jane meets with Mike Guthrie and tells him what happened, she records their conversation – later she plays the recording for Logan and he ID’s Mike’s voice as the man that was at his house.

Korsack does some research and learns that Todd and Mike went to summer camp together many years ago. Mike was a bed-wetter and Todd and his cabin mates all bullied him and teased him horribly. Then his step-father showed up at camp and embarrassed him and spanked him in front of everyone. There was just a reunion two weeks ago and they think that the reunion may have triggered something in Mike to make him seek revenge. Korsack is scared that Todd is just one person on his list – and he is going to try to kill the rest of the kids at summer camp that were teasing him too.

Frankie heads out to tail Mike Guthrie – he follows him up the highway North, Korsack thinks that Mike is going to his step-father Dana Slowey’s house to kill him next. Jane and Korsack arrive at Dana’s house to find Mike holding his step-father Dana at gunpoint in the middle of the street. Jane, Korsack, and Frankie all pull their guns and there is a stand-off. Jane taunts Mike and tells him to shoot Dana and promises that they won’t turn him in to the police. She manages to talk Mike down and get his gun away from him. Frankie handcuffs him and takes him away.

At the police station Frances show up with her son Logan – he apparently wants to talk to Jane about something. Jane sits down with Logan and he cries that he blames himself for his Dad’s death. He thinks that if he told his mom about Mike coming to his house then he would still be alive. Jane reassures him that he can’t blame himself and his father would be very proud of him for helping catch his killer.

Jane heads to Maura’s house, she hands her a case file and says that the con artist was arrested earlier that day. She was trying to use Maura’s credit card to buy a new wig. They were able to use the picture that Angela took at the restaurant to charge her with a felony.