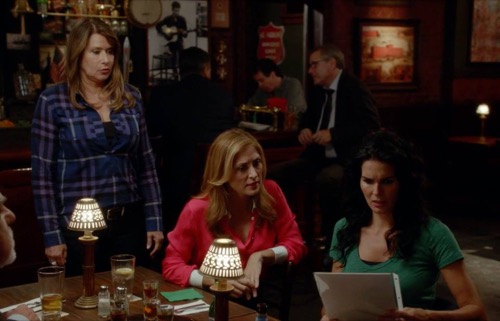 Tonight on TNT Rizzoli & Isles returns with an all new Tuesday, March 3 season 5 episode 15 called, “Gumshoe,” and we have your weekly recap and review below. On tonight’s episode, a clothing designer is found poisoned and his wife reported missing, bringing the squad together with a gung-ho private detective to investigate.

On the last episode, a notable county prosecutor (guest star Jamie Bamber) was arrested for murder, and as the case against him grew increasingly strong, Jane began to doubt he did it. Angela nominated herself to educate Maura on the interest of kids today when she heard Maura was going to meet Jack’s 12-year-old daughter. Did you watch the last episode? If you missed it, we have a full and detailed recap right here for you.

On tonight’s episode per the TNT Synopsis, “clothing designer is found poisoned and his wife reported missing, bringing the squad together with a gung-ho private detective to investigate. Elsewhere, Jane enlists Maura to help Angela with her finances.”

Tonight’s episode of Rizzoli & Isles season 5 looks like it is going to be great and you won’t want to miss it, so be sure to tune in for our live coverage of Rizzoli & Isles at 9:00 PM EST! While you wait for our recap hit the comments and let us know how excited you are about season 5 of Rizzoli & Isles? In the meantime, enjoy a sneak peek of tonight’s finale below.

Tonight’s episode of Rizzoli & Isles kicks off with someone dressed in black braking in to a clothing store late at night, they clean out the safe and copy all the files on the computer. A man catches the and demands to know what they are doing – and they throw him over the second floor balcony. One of the employees is standing downstairs and sees him fall to his death.
Jane and Maura are having wine and dinner with Angela, she has ordered escargot. Just as they are about to eat both Jane and Maura’s cell phones start to go off and they have to rush to the crime scene. Angela whines that she is being abandoned and has to eat dinner alone. Jane rants that Angela has been spending way too much money since she got a job – she is scared that she is going to go bankrupt and have to move in with her.

Jane and Maura arrive at Mamaki Clothing – where the owner Dylan is lying dead on the floor. Maura says that his skin has a bluish-gray tint, and that couldn’t have been caused by the fall. Jane and Frankie head upstairs to investigate – they think that it may have been a burglary gone bad, but the burglar wasn’t after money they were after files. So, it could have been corporate espionage.

At the office Korsack fills Jane in on Dylan’s wife Zoey, she is missing in action and they haven’t been able to contact her since Dylan was murdered. Korsack takes Jane aside and tells her that Frankie failed his fire arms test, he has two more chances to pass it and if he doesn’t he will be suspended. Jane heads to the morgue and Maura tells her that Dylan’s fall didn’t actually kill him – he was poisoned recently.

A neighbor spotted a van fleeing the crime scene, Korsack and Jane track down the van parked on the street and smell something rancid coming from the back. They open it and find bags of garbage. The van’s owner emerges and demands to know why they are searching his vehicle, he shows them a badge and reveals that he is a private investigator.

Jane and Korsack bring the private investigator is, he confesses that he was at Mamaki and was going through Dylan’s computer when he caught him. He insists that he didn’t kill Dylan, he says that Dylan started screaming at him and was acting crazy – and then he fell over the railing and died. Jane demands to know who hired him to spy on Dylan, he confesses that it was his wife Zoey. Zoey thought that Dylan was cheating on her, but the PI didn’t see him with any other women. Jerry, the PI says that he didn’t break in to Dylan’s office, Zoey gave him the key. Jerry says he called Zoey and told her Dylan was dead and she didn’t even seem to care. Korsack and Jane still can’t get a hold of Zoey, they decide to put out an APB on her.

Maura pays Angela a visit at work and gives her a self-help book on how to manage her money. Angela isn’t thrilled, but Maura begins lecturing her about “spending with restraint.” Angela laughs that she knows what Maura keeps in her “study closet,” and she shouldn’t be telling anyone how to spend money.

Jane heads to the fire range to check in on Frankie – she finds him flirting with a hot cop that is training him. She takes Frankie aside and scolds him for failing his firing test on purpose so that he could keep training with Alexandra. Frankie says that it is harmless and he will pass the next test.

They trace Zoey’s cell phone number and Frankie heads to the location – when she sees Frankie outside she starts running down the sidewalk and takes a gun out and points it at Frankie. He tries to talk her in to dropping the fun, and she begins crying that “they killed Dylan.” She puts down the gun and pleads with Frankie to help her before they kill her too.

Korscak and Jan question Zoey, she says that she thought Dylan was having an affair with their accountant Renee because he was meeting with her a lot. Dylan kept telling Zoey that he was in danger and that was why he was acting strange – but she was certain he was having an affair. Now, she feels horrible because she realizes that he was telling the truth.

Frankie corners Jane in the hallway – he is panicking is because he failed his firing test again, and this time he actually tried. But, Alexandra was standing too close to him and he got distracted. He only has one more chance to pass the test or else he will be suspended. He begs Jane to come with him tomorrow to his final test and keep Alexandra away from him so that he can pass.

Korsack meets with Dylan’s accountant Renee, she insists that she wasn’t having an affair with Dylan and that his business was going great. The reason he was going to her office so often is because he was planning on opening a new store in NYC.

Jane visits Maura in the morgue, she says that Dylan was poisoned with a party drug – it’s a new hallucinogen that just hit the market. She says there has only been three cases of the overdoses on the drug so far on the East Coast. She shows Jane the cities on the map where the drug has been found – and Jane is shocked to see that they are all cities that Mimaki clothing distributes to. She thinks that Dylan’s clothing store may have been used as a cover to distribute the hallucinogenic drugs.

Maura reveals to Jane that Dylan was drugged two hours before his death. That means that the private investigator couldn’t have killed Dylan because he was in Yoga, Jane visits Jerry and tells him that he is free to go there is no way he could have drugged Dylan. While she is I with Jerry he shows her his surveillance photos, she realizes that Dylan was carrying around a travel mug – and it had a video camera in it.

Korsack has a team of drug dogs search Mimaki’s distribution center, it’s owned by a man named Ward. The warehouse comes up clean, and Nina has no luck searching Ward’s records – Korsack is certain that he is somehow related to the drugs. Nina notices on Ward’s files that his accountant is also Dylan’s accountaint, Renee.

Maura and Jane head to the firing range and bump in to Frankie and Alexandra – Maura reveals to Frankie that Alexandra is a lesbian and she has a wife and kids. He passes his test with flying colors when he realizes there is no way that he has a chance with her.

Jane and Korsack question Renee – she begins stuttering and can’t keep her stories straight. Jane receives a phone call from the private investigator, Jerry. He puts her on video chat and screams that he is being followed – there are men chasing him down the street. Jane watches in shock on her phone as they attack Jerry and knock him down on the ground.

Jerry has been kidnapped – Jane and Korsack head back in to interrogate Renee. They demand to know where Ward took Jerry, she confesses that he owns a body shop. Meanwhile, Ward and his men are at the body shop beating Jerry, Ward demand to know where the recordings are of Dylan but Jerry refuses to give them up. Jane, Frankie, and the rest of Boston PD arrive at the body shop just in time to save Jerry – he manages to get Ward to confess to killing Dylan in front of the police before they arrest him. Afterwards Jerry thanks Jane for saving him and raves that they make a great team.

After work Jane heads over to Maura’s house where she and Angela are going through all of the pointless things that they have purchased over the last few months. Angela reassures Jane that she has everything under control – and she cut up two of her credit cards. They surprise Jane with a fancy dinner – she whines that they were supposed to stop overspending, but she agrees that they should all treat themselves every once in a while.