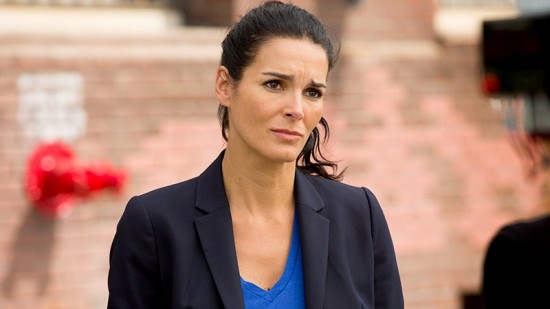 Tonight on TNT RIZZOLI & ISLES returns with an all new Tuesday, July 14 season 6 episode 5 called, “Misconduct Game,” and we have your weekly recap below. On tonight’s episode, a crime tech is murdered, shocking the team. It’s soon suspected the tech tampered with evidence, leading Maura [Sasha Alexander] to be suspended from her position.

On the last episode, the murder of a crime tech sent shockwaves throughout the team. When suspicions arose that the tech had tampered with evidence for BPD cases, Maura was suspended from her position. Jane was determined to catch the killer and clear the department so Maura could be reinstated. Did you watch the last episode? If you missed it, we have a full and detailed recap right here for you.

On tonight’s episode per the TNT Synopsis “Jane and Maura are called out to the BCU “Body Farm” (an academic research facility dedicated to the study of human decomposition) when a murder victim is found buried in a shallow grave among the research corpses. Angela also has secrets she is keeping buried from Jane.”

Susie was a very good friend and she worked for Boston PD. But in death it appeared that Susie has secrets and Maura for one didn’t know how to handle it.

On tonight’s episode of “Rizzoli &Isles”, Jane and Maura were called upon to investigate the death of someone close to them. However Jane knew how to be objective about the case and when she found evidence leading many to assume that Susie could have been dirty – Jane didn’t dismiss right away. Instead she chose to investigate the lead like any other.

Susie had a false wall in her apartment and inside there was bags, evidence bags, with objects in them and if that wasn’t enough there was a wad of cash. The money eventually added up to five grand. And with everything looked at together, not even Maura could continue to defend Susie.

At least not openly.

But Maura didn’t think Susie was dirty and she had faith that real evidence will exonerate her friend. Thus she continued to work the case and even instilled a complete transparent policy in the lab. That way no one could say she had tampered with the evidence to save either her late friend’s reputation or her own skin.

Maura was after all Susie’s direct supervisor. And, well, that meant she could be blamed for what Susie did. If she did do something that is.

And after Maura had first filled in the governor that their cases for that last couple of years could all be at risk if Susie was dirty, there didn’t seem to be any officially fallout. Yet his people must have realized in the end that they needed someone to blame if this went south. So naturally they pointed the finger at Maura.

And Jane was pissed. She immediately wanted to blame the new guy that’s filling in for Maura at the lab but it’s not like he’s out for Maura’s job. In fact when the governor made his decision, he was at the lab working the autopsy. So he was the one that found out that Susie’s body had been moved.
Therefore if the body had been moved, someone could have easily staged a scene back at her apartment.

And thankfully that theory did pan out. There was truly nothing missing from any cases Susie or her fellow doctors could have and have recently worked on. So someone intentionally set out to make Susie look dirty.

Though this diversion of theirs ended up working a little too well. The cops were thrown the moment they saw the evidence bags and Maura was benched for being too close to the case. So this plan worked for a while but then everything fell apart after the cops finally figured out what Susie was working on.

Susie you see had been asking around about that painting many had assumed was lost for good. But it looks like Susie was on to something when the person that killed her turned out to have traces of paint (used in the forgery) on them. And it was that piece of evidence that had both Jane and secretly Maura (he was still on suspension) look at their old forgery case.

That case was supposedly closed with the suicide of Charlie Ganz. Yet with him and his partner dead – there was no one to tell them if a third party just happened to be involved. But Susie found out who this person was.

The 20 million dollar painting that everyone believed had burned was actually a fake. So when Susie started to make calls and had even called the owner’s home – that’s how she tipped off her killer.

The owner of the painting is rich but she doesn’t want to support her husband’s run for governor. So the husband then manipulated her into donating the painting for a small show at the museum. And afterwards he had a friend steal it.

Though with two other partners and then Susie in the way, a simple job ended up leading to three murders.

So no one actually felt sympathy for this guy when he tried to throw blame right before his arrest. And once the detectives were done with him, they held a small celebration in Susie’s honor. Susie liked some scream rock and her small memorial sort of turned into a concert.