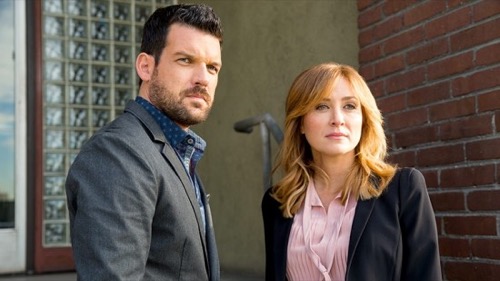 Tonight on TNT RIZZOLI & ISLES returns with an all new Tuesday, July 7 season 6 episode 4 called, “Imitation Game,” and we have your weekly recap below. On tonight’s episode, an infamous thief is murdered, plunging Jane [Angie Harmon] and Maura [Sasha Alexander] into the shady world of art heists and forgery. Meanwhile, Jane tangles with an FBI agent, and a new man enters Angela’s [Lorraine Bracco] life.

On the last episode, the murder of a notorious thief sent Jane and Maura into the world of art heisted and forgery, and forced Jane to tango with an F.B.I. Agent who had a keen interest in her case. There’s also a new man in Angela’s life. Did you watch the last episode? If you missed it, we have a full and detailed recap right here for you.

On tonight’s episode per the TNT Synopsis “the murder of a crime tech sends shockwaves throughout the team. When suspicions arise that the tech had tampered with evidence for BPD cases, Maura is suspended from her position. Jane is determined to catch the killer and clear the department so Maura can be reinstated.”

Angela Rizzoli is a quirky sort of woman. She’s taken to involving herself in other people’s lives with such vigor, that by this point in their lives, her children have simply learned to go with the flow.

This time around, however, Angela went too far. Angela spoke with Korsak and she just happened to remind him about her son Frankie. Frankie it seems hasn’t taken any of his vacation days and so his mom feel like maybe he needed to be pushed.

Technically, he was pushed out of the office and into the bar.

Angela had apparently needed his help to fix something his father had allegedly done wrong. So Frankie was at the bar helping his Ma when the feds started to crawl all over their new case.

A man’s body was found in fridge and after initial preliminaries it looks their victim was actually an art thief. Maura had to notify the proper authorities when her victim had certain chemicals on his hands at the time of death that led them to believe he just finished job. However, as oddly it sounds, there hadn’t been anything recently reported as missing.

So why did the victim have paint on his hands?

That was the question that stumped everyone! The detectives had tried to look at this case as if it was any other yet therein lies the problem. This wasn’t a typical case and so to close it they were going to need outside help.

Not from Agent Burns of course. He and Jane rubbed each other the wrong way from the start. But asking Maura take more of an active role ended up being beneficial.

Maura was the one that figured the paint on the victim was recent. It couldn’t possibly have come from anything out of the Boston Museum. So Maura being a nerd came in handy.

Maura frequently goes to the Museum and she knew for a fact that there hadn’t been any recent additions. Hence, Jane enlisted her friend’s help and they both enjoyed a black tie event. Maura was supposed to detect if any of the paintings could be a fake and Jane was merely going to act as a wingman.

Then, once Maura completed her job and was in the middle of confirming Jane’s suspicions about their victim, Jane’s lack of social graces came close to working against them.

See, Jane scratched a painting. Accidentally that is. And, really, it should have devalued though luckily she got off when Maura revealed the painting to be a fake.

The Moran is worth 20 million dollars and unfortunately its owner is very sentimental about the piece. It was her late father’s favorite painting. And the reason she chose the Boston Museum over some place is because she didn’t want it to be too far from her.

Yet, someone took the painting and even replaced it with a forgery. So that meant the police had two viable suspects. The killer either was the forger or the buyer. The forger could have wanted to take the thief out of the picture and take his cut. Or the buyer could have removed the only person that would have linked them to a crime.

So Jane initially felt like she had finally gotten a hold on what was going on. Though, as it turned out, this was just going to be one of those cases that never resulted in closure.

The forger was eventually found but, by time they reached him, he had already committed suicide. And with him all leads died. So the painting was lost. And there was no way to return that or the painting that was lying underneath the forgery.

There weren’t any arrests and the one thing that managed to make everyone smile again was when Jane figured out who her mother was dating.