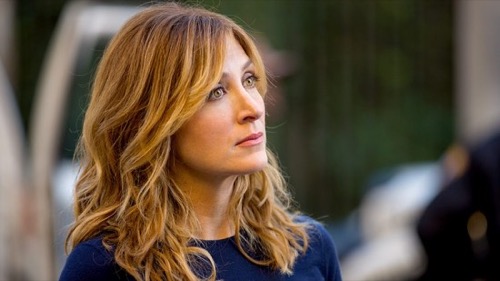 Tonight on TNT RIZZOLI & ISLES returns with an all new Tuesday, June 30 season 6 episode 3 called, “Deadly Harvest,” and we have your weekly recap below. On tonight’s episode, a murder victim is discovered in a shallow grave at an academic research facility dedicated to studying human decomposition. Meanwhile, Angela [Lorraine Bracco] hides secrets from Jane. [Angie Harmon]

On the last episode, Jane and Maura found themselves submerged in the cutthroat, high stakes world of competitive bass fishing when a tournament-leading fisherman was killed. At the same time, Frankie was paying the price after losing a bet. Did you watch the last episode? If you missed it, we have a full and detailed recap right here for you.

On tonight’s episode per the TNT Synopsis “the murder of a notorious thief sends Jane and Maura into the world of art heists and forgery, and forces Jane to tango with an F.B.I. Agent who has a keen interest in her case. There’s also a new man in Angela’s life.”

The body of Jane Doe was recovered at the BCU body farm. Apparently, med students often work with cadavers as part of their training but when one young intern went out to drop off his latest project – he came across Jane Doe. And right away the doctor in charge of the program knew something was off.

It seems he runs a very tight ship and so he’s knew for fact that Doe had never been in his lab. Though Jane couldn’t help out that if he really was on top of things then maybe someone wouldn’t have stuck a body in his facility. So Jane being Jane – she burned a few bridges she could have used.

And, unfortunately, the doctor could have been of some help.

Later, while Maura was still stuck on the cause of the death of their first victim, a second body was found – again at the facility. However, this time, the victim was a man. Plus, there was no doubt about his cause of death.

Jon Doe as most clearly killed execution style. Which at first made Korzak question whether or not the mob found out about the body farm and decided to use it to their advantage. But what made the case so confusing is that the both bodies had evidence on them that proved they were in close contact with each other. So how did two people disappear without anyone filing a missing person’s report?

Well, with the second body, the detectives were able to widen the search for a couple that had gone missing almost a year ago and that’s how they found Bonnie and her husband James.

Bonnie and James were what you would call hippies. They believed in peace and happiness. And they were also the kind of people that would attempt to ride their bike everywhere.

But the way Bonnie’s described her sister doesn’t match up to how Bonnie was dressed at the time of her death. See, Bonnie was found in an old overcoat that no woman (at least in this generation) would ever wear. And, in addition to that, she didn’t look anything like her old photos, which showed her wearing more of a festival attire than what you would see on a strange cat lady.

So a lot of things simply weren’t adding up.

There was no apparent reason to hurt this couple nor for someone to kill the husband and then wait months to kill the wife. Not unless say someone kept the wife a prisoner.

Jane and Korsak looked into a theory where someone must have been playing out scenario with Bonnie. And, surprisingly enough, everything fit. It seems Bonnie’s husband was murdered in order for some psycho to get to her. And then once the culprit had her – he tried to live out a fantasy world with her.

But then something. Bonnie probably broke the spell one day and made her kidnapper angry. So he killed her and dumped her at the same place as her husband.

Yet if she was living out his fantasy, then he was bound to want to replace her. And so the detectives looked into women that had gone missing in the last few days where they then found Sarah. Sarah, like Bonnie, had mysteriously disappeared one day after suddenly quitting her job by mail.

So Jane read Sarah’s resignation letter and it matched with Bonnie’s. The first time the culprit pulled this trick, he had too many loose ends. There was Bonnie’s husband and there was also the sister that filed a report with the police.

However, with Sarah, the culprit made sure she was single and that the only person that would notice she was gone was her co-worker.

That same co-worker was actually about to rescind her report when Jane talked to her and found the letter that was supposed to “explain everything”. So not that the detectives knew they were looking for a potential serial killer – they looked for connection between their victims. Though at first nothing stood out.

That is until they found Jeffery. Jeffery used to work for a company that delivered water jugs to offices and then one day he just quit.

And what made Jeffery an even better suspect is that he has a record with women. Apparently, he’s the controlling type. So he would get physical with women whenever they didn’t do something he liked.

So this Jeffery was coming close to murdering Sarah when the police busted in and saved her. It looks like she was going to try to escape and so when Jeffery found her he was going to hurt her for not focusing instead on his dinner.

But Jane stepped in and after seeing for herself how controlling Jeffery – she then gave her mom blessing.

Earlier, Angela had told her daughter that she wanted to take ice-skating lessons despite being uncoordinated. And Jane told her mom no because she was worried about her. Though naturally things were different after Jeffery.