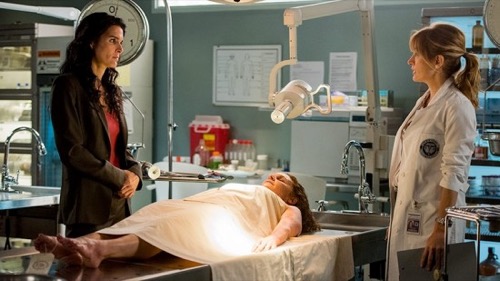 Tonight on TNT RIZZOLI & ISLES returns with an all new Tuesday, July 21 season 6 episode 6 called, “Face Value,”and we have your weekly recap and spoilers below. On tonight’s episode, a killer can’t be identified because the witness suffers from facial-recognition blindness. Meanwhile, scheming cousin Carlo plans to visit.

On the last episode, Jane and Maura were called out to the BCU “Body Farm” (an academic research facility dedicated to the study of human decomposition) when a murder victim was found buried in a shallow grave among the research corpses. Angela also had secrets she was keeping buried from Jane. Did you watch the last episode? If you missed it, we have a full and detailed recap right here for you.

On tonight’s episode per the TNT Synopsis “the good news is we have a witness to a murder. The bad news is he suffers from Prosopagnosia, commonly known as facial recognition blindness, and he can’t recognize the killer. The Rizzolis prepare for a visit from their scheming cousin Carlo.”

Cousin Carlo, a relative of Angela’s, is coming for a visit and for some reason that had both Jane and Angela one edge.

Maura didn’t get it and more importantly she never figured out how this cousin of theirs learned her phone number. But to her, family is family. And she simply could not understand why the women would dread Carlo’s visit.

And she still felt that way even after they told her about Carlo. Carlo you see does not have a job yet he can always be found wearing fancy suits and driving a Lexus. So it’s high likely that this cousin Carlo lines his pockets by being a con man.

Thus the reason his family don’t want to be around him is that they fear he’ll try to con them next.

And that’s also why Angela immediately went into clean up mode upon hearing about her cousin’s visit. She cleared out the house of all rugs and had even removed the knives. Basically she removed anything that Carlo could potentially sue them over and went as far to enlist her son in helping her to do so.

But Jane was left out of this little excursion. A murder had been reported earlier and the eye-witness had an unusual condition.

Elliott Dutton was by a huge shopping event when the woman that was standing right next to him was stabbed. So naturally someone in Elliott’s positon would have been able to identify this killer. However because of his condition, the killer could walk pass Elliott a thousand times and Elliott would believe him to be a thousand different people.

See Elliott has facial recognition blindness. Meaning he can’t tell people by their faces and the second they’re out of sight – he completely forgets what they look like. And it’s because of this condition that Elliott ended up running into the murderer twice.

After that woman had been stabbed, the police looked at the footage and the fingered Elliott seeing as it looked like he was running away from the scene of the crime. But the truth is that someone had been chasing Elliott and when this person got close – Elliott ran away and another person was injured in his place. So it was Elliott that was the target all along.

Franklin Simms was Elliott’s boss and he was found murdered at their office. So that person that Elliott felt was following him could not have been the boss that had been dead for hours before the crime.

Though this is where Elliott’s condition creates problems. He saw a man at his office and because he confused him with his boss – he has no idea about who really was following him. Nor can he assist the police in capturing this guy before he ends up as the third victim.

So the police had to conduct an entire investigation with little to no input from the man they want to protect.

And one of the first thing they had found led them to believe Elliott was keeping secrets.

They had found out that Franklin Simms was dirty. The evidence clearly stated that his business had been used to secretly launder money and so no could believe that the same Elliott who handle the books was as unaware as he would go on to claim.

And they were right. Later, after Jane put the screws to him, Elliott admitted to withholding the truth. He said that he knew something was off. Nothing specific but that something was off. Though he refused to say anything because there weren’t a lot of men like Franklin that were willing to hire him with his condition.

Thus Elliott kind of kept his head down. And someone eventually used that to their advantage.

Elliott heard the distinctive sounds of a Mr. Wilcox when the police played him a video of a known crime boss that Simms had been working with. And so they found out who had killed that poor woman and Simms. But the fact any good lawyer could rip Elliot’s testimony meant they had to keep looking for concrete evidence.

And Elliot turned out to be helpful in this.

The police couldn’t arrest Spencer Romero based on poor eye-witness testimony. But when Spencer came after Elliott and then was caught in an attempted murder plot and assaulting cop – that helped sealed the case for the police.

But Cousin Carlo was funnily enough smarter than Romero. He initially played nice and then he tried to cheat Maura in a lawsuit.

And, well, thank god Maura had cameras put up all over her house because it really does pay to be suspicious of family.