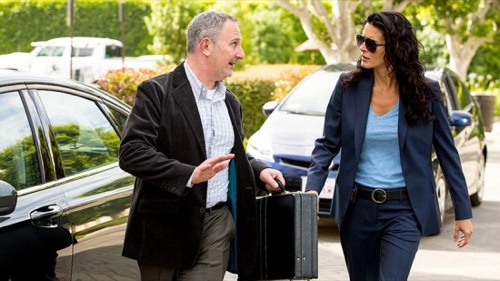 Tonight on TNT RIZZOLI & ISLES returns with an all new Tuesday, July 28 season 6 episode 7 called, “A Bad Seed Grows,” and we have your weekly recap below. On tonight’s episode, A teen girl is murdered. Obstacles in the case include a fussy prosecutor and a psychiatrist mired in an ethical dilemma.

On the last episode, the good news was we had a witness to a murder. The bad news was he suffered from Prosopagnosia, commonly known as facial recognition blindness, and he couldn’t recognize the killer. The Rizzolis prepared for a visit from their scheming cousin Carlo. Did you watch the last episode? If you missed it, we have a full and detailed recap right here for you.

On tonight’s episode per the TNT Synopsis “when a sixteen-year-old girl is murdered and left in a cage, Jane and Maura must overcome the ethical dilemma of a psychiatrist and the stiff opposition of a fussy prosecutor in order to find the killer. Meanwhile, Jane has couch issues, and Frankie is seeing UFOs.”

A woman was out jugging on tonight’s episode of Rizzoli & Isles when her dog came across the body of a young girl that was mysteriously placed in a cage.

Unfortunately, the victim was a teenager. And earlier in that same day, the late Sheila McIntyre had gotten written up for truancy. However there was no way to know whether or not their victim knew her killer beforehand.

There was no clear signs of a struggle or drag patterns indicating this was not a case of opportunity. But what has the police worried, more than Sheila’s death potentially going unsolved, is that evidence found at the scene revealed their killer was merely getting started. And that he had thought about what to do with his victim long before he ever set eyes on poor Sheila.

See the cage in which Sheila was found in was covered in older blood samples. Hence Maura had to do a complete diagnostic. Where did the blood come from and how old was each sample? And what she found was evidence of a squirrel, raccoon, and a dog had at one point in time had all bled out in that cage.

And someone starts with animals then move on to humans that could only mean Sheila’s killer is escalating.

This person began with animals until they felt confident enough to target an actual person. And then he found a way to attack his victim and place her body in his favorite hiding spot without anyone noticing. So that’s where that puncture wound on the back of Sheila’s neck comes into play because it could explain why there was no clear signs of a struggle.

The tox report revealed that Sheila had been drugged with drugs typical used for euthanizing animals. And, seeing as the killer’s earlier victims were all animals, that must mean their killer had a vast supply of the drugs he needed. Though these drugs can’t be found at any old store.

So Jane had Korsak and Frankie looking into tracking these drugs but the in the meantime she wanted to know if she could crack a certain doctor.

A Dr. Foley had dropped by Maura’s office and she certainly got a feeling that he knew more about her case than he was letting on. Thus she tried to push on the matter and sadly he shut down completely on her. See, Foley is a therapist. And the fact he felt comfortable about Maura’s case yet refused to answer any of her questions could only mean one thing – he knew who the killer was but couldn’t say because of doctor/patient confidentiality.

However, the drug trace and even an analysis on who they were looking for didn’t yield that much results. So Jane went back to the doctor’s office and she brought along Korsak to see if they could at least get some clues from the doctor.

Though, they weren’t counting on finding their doctor’s body and a young teenager, covered in blood, hiding in the closet.

The kid’s name was Daniel and, thanks to that profile earlier, the sixteen year old fit the criteria they were looking at for possible suspects. So was this scared kid that had begged the police not to hurt them the same killer they were looking for? Well, evidence seems to point in that direction.

Daniel’s fingerprints were found on the murder weapon and the blood splatter on his clothes showed that he was standing right in front of Foley when the older man was stabbed. And a background check even connected him to Sheila’s. Apparently he had worked at animal shelter where he had access to the same drugs that killed Sheila till one day he up and quit out of the blue. But, when confronted, Daniel had the perfect cover-up story. He said that Foley had been molesting him and was going to hurt him if he told anyone.

So, although he pretended to be a scared kid, Daniel was in fact a budding sociopath and the police didn’t have definitive proof at that point to arrest him for either murders.

Chances are he most likely killed his doctor once Foley confronted him about Sheila. In fact maybe was trying to convince Daniel to turn himself in and was even prepared to do it himself when Daniel decided to kill him. So if that’s what happened then that would mean Daniel has no qualms about doing whatever it takes to cover his tracks.

But that insight into his character helped the police figure out what happened to all of his documents at Foley’s office.

The police had checked everything and they initially couldn’t find a trace that Daniel had been seeing Foley for six months. His file was practically bare. And it was almost as if his file was merely there as a decoration.

Thus they had to go back to their profile of Daniel in order to figure out where he must have hidden his files. And you know what a highly intelligent sociopath would do when the police were right outside banging on the door – he would empty out his files and stash documents into other patient’s files knowing the police would never get a warrant to check. But Daniel had underestimated the people around him.

For instance, he never suspected that his mom knew something was wrong with him. Or that Foley’s assistance would go checking through all of the patients’ files on the excuse that’s he was wanted everything in order just to get some justice for her former boss.

So Daniel was tricked. He went down to the garage hoping to kill his mother before she could testify against him when in truth the cops had conducted a sting to catch him with Sheila’s murder weapon in his hand. And he was taken into custody where he could no longer hurt anyone.