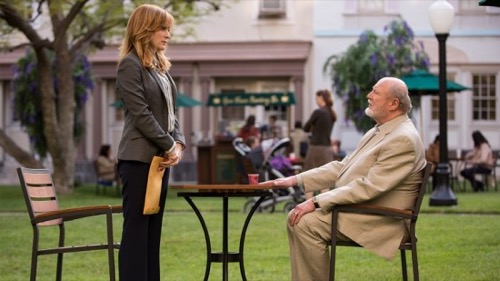 Tonight on TNT RIZZOLI & ISLES returns with an all new Tuesday, August 11 season 6 episode 9 called, “Love Taps” and we have your weekly recap below. On tonight’s episode, the murder of a college student is investigated.

On the last episode, when the jeweler to Boston’s super cool and famous died, our investigation lead us to a member of the Isles family we’ve never met. And that lead us to a secret Maura had been keeping for almost all of her life. Did you watch the last episode? If you missed it, we have a full and detailed recap right here for you.

On tonight’s episode per the TNT Synopsis “the murder of a college student is investigated. The case veers in a bizarre direction when Jane and Maura discover the victim had no less than 32 girlfriends, leading them into a world of app developers, virtual boyfriends and deceitful romances.”

Tonight’s episode of Rizzoli and Isles kicks off with Jane barging in to Maura’s house – and she is wearing a fringe leather jacket. Maura is obviously not impressed with her fashion choice. Jane reminds her that Maura told her to update her wardrobe. Maura’s phone goes off – she presses the ignore button on her dad, she still doesn’t want to talk to him. She is still bitter about him cheating on her mom. Jane thinks that Maura has been carrying this baggage around long enough – and it is time she confront her dad.

They get a call, they arrive at a cliff where a hiker appears to have fallen. Maura does a quick examination, it looks like someone hit the hiker over the head before he died. The wounds don’t correlate with just a fall. The victims fingers also appear to be broken. Maura says it sounds like their victim “pissed somebody off.”

Frankie tracks down the hiker’s roommate, who says that he was “super boring,” and they didn’t really talk. They search the dorm room and find his wallet and debit card and phone, so obviously he wasn’t being robbed. They also find a first edition book, “Don Juan” in his room that is worth a couple thousand dollars. Frankie and Corsac decide to talk to some of the other kids at the college to see if they know anything.

Back at the exam room – Maura found rubber on the victim’s skin. She tells Jane that the cause of death was trauma to the skull. And, the rubber means that someone was standing on his fingers with ruber hiking boots and that is how they were broken. Jane heads to the office and finds Frankie and Nina going through the victim Stuart Crane’s phone. Apparently, Stuart was quite the Don Juan, and he had 32 girlfriends. Nina is baffled though, reading through the text messages it looks like he never actually saw any of his girlfriends. He doesn’t have any family in his phone, Nina thinks that he might have a second phone somewhere.

They find one text message from an angry man – he threatened to kill Stuart if he didn’t stop texting his wife Heather. Jane and Korsak pay Rick a visit. He insists that he had nothing to do with Stuart’s death. Heather explains that her boyfriend was even real, she thought that she was just texting a robot. She downloaded an app called “Your Perfect Mate” and they texted her every day and told her that she was pretty.

Korsak sits down with Stuart’s sister, she reveals that her brother was broke and he was paying his way through college – that’s why he started working for the fake boyfriend app. Apparently the owners of the app stopped paying him, and he hadn’t gotten a check in weeks. He had problems with other clients not just Rick. His sister thinks the app had something to do with Stuart’s death. Korsak promises her that they will find out the truth.

Frankie and Korsak pay a visit to the Perfect Match App office, the owners insist that the clients loved Stuart – and they highly doubt his death had anything to do with the app. The owner says that their system keeps their sender’s information anonymous, and he has an alibi but he agrees to give the police all of the messages that have been saved to their server.

Frankie and Nina make a shocking discovery, apparently over 1000 of the women texting the app have reported burglaries in the past few months. They decide to set up the fake boyfriends, and use the app on Nina’s phone – she casually mentions that she keeps electric guitars in the van outside of her house. Sure enough a few hours later Frankie catches someone breaking in to the van with a crow bar and he arrests him.

Frankie brings Evan in for questioning – he is a programmer at the Perfect Mate App. Evan insists he doesn’t know anything about the string of burglaries of their clients. Evan finally admits that he took advantage of their customers and robbed them. He insists that he didn’t have any help. Frankie asks Evan if Stuart Crane caught him, Evan insists he had no idea that Stuart was even dead and then he lawyers up.

Nina catches a break, someone turned on his other cell phone – and they are taking pictures of what appears to be a skateboarding park. Maura recognizes the pictures – she saw it when she was on a hike going through Franklin Park. She agrees to take Nina and Jane and show them where it is. They find the kid that is taking selfies on Stuart’s cell phone and bring him in to custody. He says he found the phone on the hiking trail – and insists that he didn’t see a body or anything suspicious. They are back to square one. But, Nina is looking for clues on the phone.

Nina finds some suspicious texts from Heather Matthews, the woman whose husband threatened to kill Stuart for killing his wife. They learn that Heather wanted to meet her fake boyfriend, so Evan sold her Stuart’s personal information. Nina does some digging and finds out that Heather’s social media accounts were shut down for abusive behavior. Frankie, Jane, and Korsak rush to Heather’s house, they find her in the kitchen and she has her husband tied up – she is dumping gasoline all over him. She is getting ready to torch the house.

They rush inside and Heather pulls out a lighter, she confesses that she killed Stuart – but she didn’t mean to. She didn’t understand why he didn’t love her. Apparently Heather is cray cray. She tries to toss the lighter on her husband – but Korsak reaches out and catches it and they manage to avoid a disaster. Heather is arrested for Stuart’s murder and they take her in to custody.