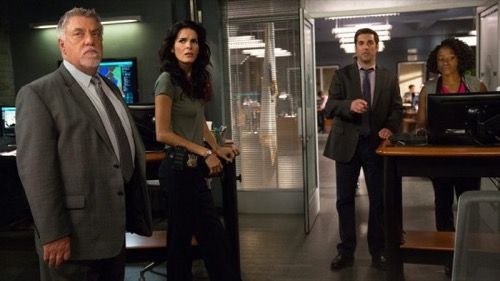 Tonight on TNT RIZZOLI & ISLES returns with an all new Tuesday, August 18 season 6 episode 10 called, “Sister Sister” and we have your weekly recap below. On tonight’s episode, the murder of a college student is investigated.

On the last episode, the murder of a college student was investigated. The case veered in a bizarre direction when Jane and Maura discover the victim had no less than 32 girlfriends, leading them into a world of app developers, virtual boyfriends and deceitful romances. Did you watch the last episode? If you missed it, we have a full and detailed recap right here for you.

On tonight’s episode per the TNT Synopsis “When a dog trainer is found dead at home, her champion Rottweiler is the prime suspect. As the team investigates this unlikely killer, Maura has a peculiar interaction with Kent.”

A highly prized dog had attacked its owner on tonight’s episode of “Rizzoli & Isles” and normally that wouldn’t be an issues but unfortunately the owner died not long after that.

Mona Evans you see loved her dog. She entered him in practically every competition she could and then built a shelf right there in her living room to show off all their blue ribbons. So, from all appearances, this woman loved her dog. And he must have loved her back if he could be so obedient.

Thus no one could understand why a dog like that would turn on Mona. It simply did not make sense until, finally after hours of waiting, they got back Mona’s initial autopsy.

Mona had been poisoned. And it probably happened when she tried out Duke’s food when he seemed hesitant to eat it himself. So knowing dogs and their sometimes unusual senses – it’s likely the dog didn’t want to eat his salmon because he knew there was something wrong with it. Then he attacked his owner in an effort to stop her from tasting it.

A plan that sadly did not work.

And in the middle of one of the saddest cases, the new guy Kent ended up surprising everyone by springing a kiss on Maura. She was actually talking to him about the case and then out of nowhere he kissed her. Just like that.

Then he kind of fled the scene.

Maura didn’t know what to do. Especially as Kent is a subordinate. And Jane proved to be of no help. So they tried, in vain, to push the men issue to the side and focus on the case.

And when they found out that Duke was the intended victim, Korsak used that information to go get Duke from the pound. The dog had immediately been taken into custody once they saw he had bitten his owner. And the pound he was in would have put him down for such behavior.

So Korsak, the dog person, intervened. For he felt Duke should be given a second chance at life for trying to protect his owner. But there was a problem in gaining Duke’s freedom – someone still wanted him dead.

And there was just too many people that wanted Duke dead. There was Mona’s drug addict of her daughter. Apparently felt more at ease with dogs than she did with people. So a daughter feeling neglected might have acted out of revenge.

Then there was also people on the dog circuit that would remove their biggest rival. Because, remember, Duke had shelves of trophies. Meaning he was more than good. He was a champion that many second or third placements would want to remove.

So somehow Jane got roped into the dog circuit. Mona’s daughter hadn’t been seen in the last few days and the show pony shows were the detectives’ best lead.

However Duke has always been led by a woman so that’s where Jane came into picture. She was the one that had to train Duke and present him at the dog show. Only they ran into a familiar face while they were there – they saw Sarah Evans – Mona’s daughter.

Duke had instantly recognized her and then he led the police right to her. Sarah it seems hadn’t known about her mother. So she showed up expecting to the older woman and possibly apologize for their fight.

But it didn’t take all that long for the police to notify Sarah and once they did – she confessed. She admitted to poisoning Duke’s food. She said she always resented how much her mother paid attention him while she ignored Sarah and her sister.

So the confessions should have been the end of this case. Yet it wasn’t because Maura found that there were actually two different poisons found in Mona’s system. And whoever had drugged Mona’s coffee was the one that killed her.

Funnily enough the poison they had found in the dog was not in fact enough to kill either of them. Then again what can you expect from a junkie.

Sarah thought a small dose of rat poison would kill the dog so she didn’t bother looking into how much was needed. But before she acted on her plan, she had told her sister about what she was going to do. So this Trisha looks like a great suspect. The other sister had just right amount of forewarning to kill her mother and make it look like Sarah.

And the reason she would get rid of them both is because Mona was sitting on a million dollar property. Yet when confronted, Trisha denied everything and was willing to go to the police to prove her innocence.

So that left only Mona’s nosy neighbor. This neighbor was moving and must have realized that the property would go up if the only stand-out in a hug property deal were to suddenly die.

And that was just downright cold.

But with the case closed, Maura and Kent finally had that awkward conversation and it looks like he kissed her because he was going through things in his personal life.

The truth is, though, he might have a thing for Jane.