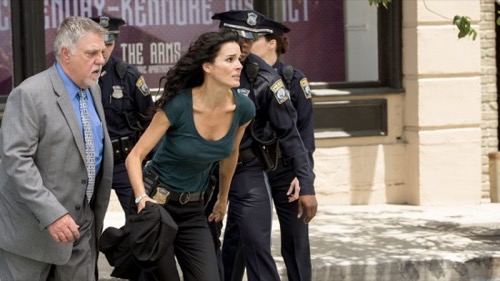 Tonight on TNT RIZZOLI & ISLES returns with an all new Tuesday, September 1 season 6 episode 12 summer finale called, “5: 26” and we have your weekly recap and spoilers below. On tonight’s episode, an old watch is discovered inside a balloon of cocaine in a dead woman’s stomach.

On the last episode, a body turned up in Boston with an apparent connection to another murder in Los Angeles, so Jane and Maura jet off to the West Coast to investigate. Meanwhile, Angela and Korsak planned a double date with Kiki and Ron. Did you watch the last episode? If you missed it, we have a full and detailed recap right here for you.

On tonight’s episode per the TNT Synopsis “an old watch is discovered inside a balloon of cocaine in a dead woman’s stomach, and determining the timepiece’s significance becomes a key to protecting Jane and the people she loves.”

Jane has a stalker and he’s proving to be a dangerous one at that. So on tonight’s episode of “Rizzoli & Isles” Korsak took Jane off of active duty. And had her stay on at the office in order for her to find out everyone who could possibly have a grudge.

And it was kind of turning out to be a long list of people.

But the video this stalker had sent in of them burning down her apartment ended up providing clues. Namely a distinctive tattoo on the arsonist’s wrist. And from there that’s when things began to get weird.

Oddly that same tattoo, that evident in the footage, was linked to a recent murder victim. And that was the case that Korsak had initially told Jane wasn’t any of her business. Only now it is and that means no one was going to keep Jane from investigating this woman, Lianne.

Lianne Samson was murdered not long after receiving an envelope full of money. So while it doesn’t look she was actually the one doing all of the stalking or evil plotting – she was involved in some degree in what happened to Jane. And someone killed Lianne to keep her quiet.

Maura initially autopsy revealed that Lianne was skilled by someone seemingly an expert at it. And that instantly put on her guard. She was afraid for Jane and she wasn’t hiding that fact from anyone. Yet Korsak refused to take Jane off the case once it revealed she was at the center of it.

Their victim was killed by someone who didn’t care about money and wasn’t willing to spend anything to make a point. Though what a point – Jane’s watch was found in the stomach of the victim. And it was to 5:26 which they knew to be significant.

So that’s when everyone knew the crime was personal. And Korsak finally agreed to do what was best for Jane which was to put her in protective custody.

Jane is tough but she often doesn’t think about her own well-being. Thus, what she needed was a bodyguard and if that wasn’t enough then her mom could pretty much seal her in.

Angela hadn’t known about the danger but she did sense something was off. Especially as Jane had been ignoring her and her calls for the most of the day. So paying a personal visit to the station, she corned her son and found out someone had been targeting her daughter. Then proceed to track down her daughter better than a blood hound.

And so that’s how Angela met Boris.

Boris claimed to be a friend of Jane’s though really he was her protective detail. But Angela hadn’t guessed that part. She just barged her way in and caught the two of them having dinner so she thought they were on a date. And threatened Boris the moment Jane’s back was turned.

So it was fortunate that Angela had been calmed down in time because soon after she left – the police stepped in and emptied Frankie’s entire apartment building. And also had the place searched by a bomb sniffing dog.

Yet, with snipers in place and the whole neighborhood, nothing happened at 5:26. Or in the short time afterwards. Meaning it wasn’t the time that was a trigger – it was something else. Like a message or code. Though, at the time, Jane hadn’t known which.

But what she did know then was that she couldn’t stay penned up. So she pushed herself back into the investigation and was taking out her frustrations on Frankie of all people. And let’s face it – Frankie was only worried about her.

Hence he left the station and was hitting the bar when everyone else was still at the office.

And he wasn’t there when Jane finally figured out the code. Which was biblical by the way. Though it delivered a simply message that even an atheist could understand – it told Jane “he’d take everything” from her. As if someone this had been about revenge the whole time.

So Jane had to race to her mother’s who had already left the bar in order to enjoy nice quite bath at home. And she and her brother had to see for themselves if Angela was alright.

Angela was fine but that’s because she hadn’t been the target. No, the real targeted turned out to be Maura. Someone called Maura to a fake crime scene and abducted her before she could raise the alarm.