Rizzoli & Isles Recap and Spoilers: Season 6 Episode 11 “Fake It ‘Til You Make It” 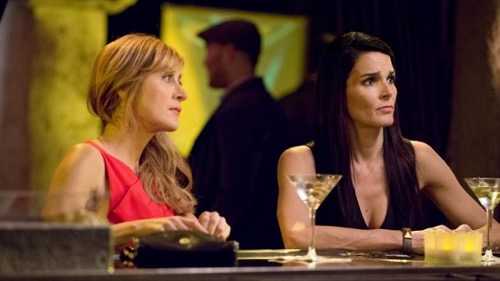 Tonight on TNT RIZZOLI & ISLES returns with an all new Tuesday, August 25 season 6 episode 11 called, “Fake It ‘Til You Make It” and we have your weekly recap and spoilers below. On tonight’s episode, A body turns up in Boston with an apparent connection to another murder in Los Angeles, so Jane (Angie Harmon) and Maura (Sasha Alexander) jet off to the West Coast to investigate.

On the last episode, when a dog trainer was found dead at home, her champion Rottweiler was the prime suspect. As the team investigated this unlikely killer, Maura had a peculiar interaction with Kent. Did you watch the last episode? If you missed it, we have a full and detailed recap right here for you.

On tonight’s episode per the TNT Synopsis “a body turns up in Boston with an apparent connection to another murder in Los Angeles, so Jane and Maura jet off to the West Coast to investigate. Meanwhile, Angela and Korsak plan a double date with Kiki and Ron.”

Jane was experiencing a crisis of her own when she got called down to work. Apparently someone had gotten a hold of her number and was using it to run an escort services. So while Jane was waiting on a new number, hopefully provided by her union; she was put on the case involving a particular mysterious John Doe.

All John Doe cases are by definition a mystery but this time they thought the guy identifying himself as Dan Walsh really was Dan Walsh until a homicide victim with the same name and actually prints to match showed up dead in LA. And, frankly, two guys claiming to be the same man both turning up dead is just too big of a concidence.

So right away the Boston PD believed their John Doe had a connection with the guy he was claiming to be. And the only way to get to the bottom of what happened was for them to go out to LA. Them being only Maura and Jane.

It’s not like the BPD was going to pay for the whole squad to visit the west coast.

Anyways, it was bad enough with only Jane and Maura. Maura had to go because the LAPD had a backlog of cases that they had to search through and if they wanted an autopsy done on Dan Walsh then they literally had to go oversee one themselves. But Jane had to investigate a case on someone else’s turf and often that’s not easiest thing to do – particularly when its with someone like Jane who can be pretty judgmental about places like LA.

Flips-flops and drumming circles are just too much for her.

Roger Parsons it seems had done a runner on his old life and was even willing to fake his death to get away with it. Roger’s obituary had claimed he allegedly killed himself. And his sister had unfortunately believed it and had also had a funeral for him.

But his “jump from the bridge” was faked and his sister for one was especially upset to find out her brother had been alive up to a few days ago.

Faking his own death just seemed completely out of character. And before her brother had did that, his sister said Roger was busy living it on the party circuit. As in he was out every night out at some club and he somehow managed to make friends with people in the know.

So they found some of Roger’s old friend and it turns out that Roger used to be a runner. He would be the one to run out and get things for the club owner’s more expensive clientele. And admittedly this put him into contact with a well-known drug dealer.

Lamar provided the drugs and all Roger had to do was deliver them to the celebs. Yet, after his girlfriend OD, Roger knew they couldn’t be part of that lifestyle anymore. So he eventually found a way to leave the business and faking his own death did drop him off the radar.

But who killed him was what everyone wanted to know? And, as they were waiting for something to lead them to his killer, Jane found out that someone hacked her. They closed down all of her back accounts and they were probably the ones that gave out her number for escort services. So an investigation into what’s going on with her hacker had to be opened back home.

And later it a Dustin Shaw was leaving everyone stumped.

A Dustin Shaw had taken a flight to Boston and was on the returning flight less than a day later. Yet the real Dustin Shaw was a homeless man who died of natural causes. So it looks like Jane wasn’t the only one whose identity had been stolen.

Dustin Shaw turned out to be a con artist. He would steal the identity from the homeless he claimed to be helping, on top of skimming a little off their social security checks, and he would sell it for a price. Which is how he met Roger. But when the real Dan showed murder – the man pretending to be Shaw knew he had to get rid of the only person that could connect him to the case.

So that’s why he killed Roger but the reason he killed Dan was because Dan had caught on to what the friendly neighborhood bartender was really doing.

And as for Jane, she never did come to like LA though she didn’t like returning home either. The person that hacked wasn’t just pulling jokes. He revealed himself as the person that had also burned down her apartment. So Jane has an enemy and there doesn’t appear to be any boundaries this person will not cross.

So, all in all, the only people that had enjoyed themselves these past few days were Angela and Korsak. Their significant others had once tried to date each other but that turned out to be something they could all live with and laugh about.