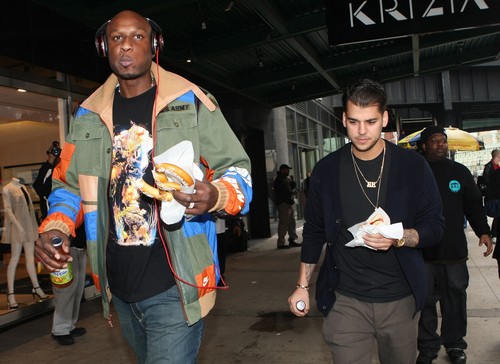 We might have finally found someone who hates the Kardashians more than their brother Rob Kardashian! Lamar Odom has officially declared war on Khloe Kardashian and her family after being set up for an embarrassing incident at SoulCycle. Lamar Odom reportedly is a stalker and showed up and was harassing Khloe, but according to him and all evidence he was set up by the family and Khloe told him she would be there! This wouldn’t be the first time KUWTK and the Kardashians set up the former NBA player to stir up some drama for their reality TV show. Don’t forget how Kim Kardashian and Kris Jenner did the same thing to Kris Humphries on several occasions.

If there is anyone that knows what it feels like to be played and used by the Kardashians just for ratings on their reality TV show – it’s Lamar’s ex brother-in-law Rob Kardashian. Over the course of the past year Rob has distanced himself from his famous family, slammed them on social media, and even threatened to sue them for using his personal problems on their reality TV show without his permission.

Rob Kardashian has vowed to get revenge on his momager Kris Jenner and fame-hungry sisters, and after seeing Lamar Odom lash out in a recent video about how the Kardashians are portraying him all wrong – he has reportedly reached out to his old BFF. An insider close to the Kardashians dished to CDL, “Rob and Lamar were so close before the divorce. When Rob saw Lamar’s video, and heard him threatening to expose the Kardashians, he reached out to him immediately. They have been bonding over their mutual hatred for the Kardashians, and the two of them combined could totally destroy the empire that Khloe, Kim, and Kourtney have been building with Kris Jenner’s guidance.”

If we were the Kardashians, we’d be shaking in our boots right now. Rob and Lamar combined know enough secrets to bury them – and destroy the images they have been building over the past decade. We can’t wait to see what Rob and Lamar have up their sleeves! Do you think Rob and Lamar will be able to take down Kris Jenner and her famous family for once and for all? Let us know what you think in the comments below!