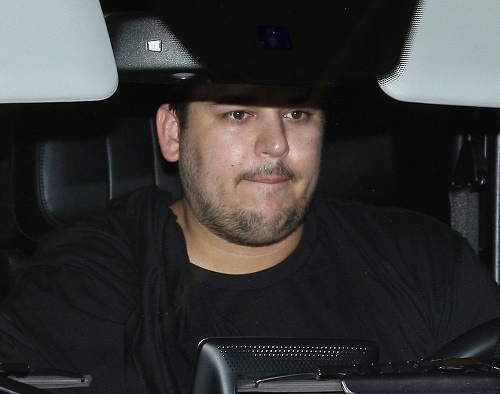 Rob Kardashian is a ticking time bomb – and the more his sisters and mother Kris Jenner embarrass him on Keeping Up With The Kardashians, the more dangerous he becomes. This week Khloe revealed that her brother has been partying hard with “whores.” Rob Kardashian is in the process of suing the Kardashians for using him in storylines on their reality TV show, and not paying him a dime!

Rob was recently left out of the $50 Million deal that his family inked with E! for KUWTK, and since his weight gain and alleged depression and drug use, Rob has refused to film the show. Ironically, so far almost every episode of Season 10 has been about Rob, and he is not happy about it.

Rob Kardashian hates his sisters and mother Kris Jenner – he recently lashed out at Kim on Instagram and compared her to the “psycho bitch from Gone Girl.” Insiders say that Rob is currently working on a deal for a tell-all book or interview where he plans to expose all of his family’s secrets, including the fact that Khloe isn’t even a Kardashian and her biological father is a hairdresser named Alex Roldan. You would think that with Rob suing them and threatening to destroy their family the Kardashians would do some creative editing and stop airing episodes of Keeping Up With The Kardashians where they make him look bad – but that isn’t the case.

On the latest episode of Keeping Up With The Kardashians, Khloe revealed to Kim that Rob threw a wild party at her house with a “bunch of whores” and someone even threw up inside her home. Kim Kardashian was disgusted and had nothing nice to say about Rob – she ordered her sister Khloe to kick him out already. At this point, who can blame Rob for wanting to take down the Kardashians? Not only does he have no income, but they are making millions of dollars by embarrassing him on national television. First, there was the intervention, then they searched his underwear drawer on camera, and now Khloe is telling everyone about how hard he parties and that he has been hanging out with “whores.”

Although Kim thinks that Rob’s threats are laughable and is convinced nothing can take her down – Kris Jenner is shaking in her boots and reportedly secretly meeting with Rob and trying to pay him off. Our insider dished, “Kim is full of herself, she thinks that regardless of what Rob says her image will remain intact. But, Kris understands way more about publicity than Kim or her sisters do – and she knows that Rob is going to make them look like monsters. And, obviously she doesn’t want the world to know that Khloe’s dad is not Robert Kardashian Sr.”

Have you been watching this season of Keeping Up With The Kardashians? Do you think Rob has a reason to be upset at his family for airing his dirty laundry on national TV, and then not even compensating him for it? What other secrets do you think Rob will reveal if Kris Jenner doesn’t pay him off? Let us know what you think in the comments below!