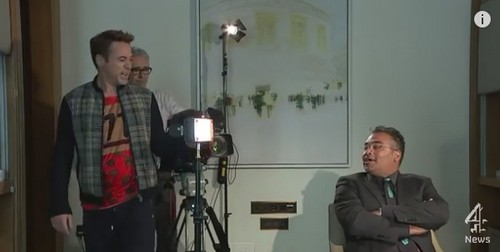 Actor Robert Downey Jr. was recently filmed walking out in the middle of an interview while promoting his new film Avengers: Age of Ultron, in London. The interview took place at a press junket for the movie, and Downey was ready to discuss all things Tony Stark. The interviewer, however, wanted to get a little more personal, and began asking questions that Downey was not fond of, causing him to eventually get up and leave in the middle of the interview.

Channel 4 News Krishnan Guru-Murthy awkwardly asked a question about a quote that Downey released to the New York Times years ago. The actor dismissed the question by asking, “Are we promoting a movie? I’m certainly not going to backpedal on anything I have said before.”

This was just the start of the awkward exchange between the two. Krishna Guru-Murthy goes on to ask Robert Downey Jr. about “the dark periods,” of his life. He says, “…taking drugs, and drinking and all of that, and I just wonder if you think you’re free of all of that?” Downey responded by saying, “I’m sorry what are we doing?” He then gets up, and walks away from the interview.

Guru-Murthy apologized, and Downey responded by removing his mic and saying, “It’s OK. It’s just getting a bit Diane Sawyer..”

Celebrities do not liked being asked personal questions when it comes to press junkets. They are there for a reason, and Guru-Murthy should have known that. Of course, this also leads us to believe that Robert Downey Jr. may be hiding some dark secrets that he does not want the world to know about.

This is the second time that a big name star has walked out on Guru-Murthy. In 2013, Quentin Tarantino told the journalist, “I’m shutting your butt down,” when he asked him, “why he’s so sure there is no link between enjoying movie violence and enjoying real violence.” Maybe, Krishnan Guru-Murthy should re-think his career choice.

We want to hear from you. Do you think Robert Downey Jr. left the interview because he is hiding something, or was he simply frustrated at the fact that the interview had gone so off topic.