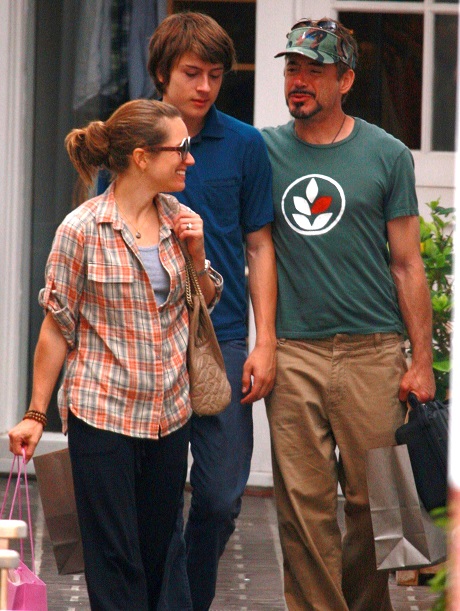 Unfortunately, for Robert Downey Jr., it sounds like the apple doesn’t fall far from the tree. The actor famously struggled with a drug problem that landed him in prison and now it seems that his son is following a similar path. Indio Downey was busted at around 2pm on Sunday afternoon in West Hollywood when cops spotted him smoking something out of a pipe. The vehicle that he was a passenger in was pulled over and Indio was arrested for having cocaine in his possession.

Indio paid $10K to bail himself out at around midnight and is currently free. The 20-year old starred in Kiss Kiss Bang Bang but has yet to really decide that a career in Hollywood is what he wants most. Perhaps now we know why. It kind of looks like Indio is another entitled kid of a celeb with a huge bank account of his own to burn through. Instead of his father’s career being a motivator, it looks like his illustrious use of coke and heroin is a bit more inspiring to Indio.

Do you think that Robert and his wife Susan have known about Indio’s drug use and just haven’t been able to convince him to get help? Being an addict for so long, surely he should know the signs that his kid is also using, right? Do you think that celebs with addiction problems are more inclined to have kids that also use, simply because they have the money to feed the vice? We know that addictive behavior is often carried in the genes but it’s also easier for these kids to use because they likely have the cash on hand, right? Do you think that Robert is going to try and force Indio into rehab after this arrest or is his son going to have to fall farther before he bottoms out?

The above photo (2009) depicts the happy Downey family.