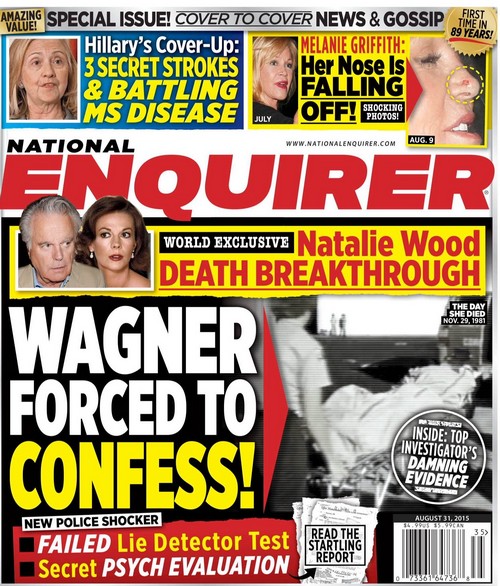 It’s been 34 years since the suspicious drowning death of Natalie Wood in 1981 and, according to the National Enquirer, new lie detector analysis reveals that her husband Robert Wagner is lying about her death. Michael Sylvestre, a voice stress analyst used a police tool called the Psychological Stress Evaluation to review Robert Wagner’s statements about his wife’s death.

The results? Sylvestre believes that Wagner is lying about the circumstances surrounding Natalie Wood’s death and is covering up something. He went so far as to says it’s a “strong possibility that Robert Wagner murdered Natalie Wood.” Wagner has stated that his wife slipped off the boat step leading to the water and accidentally drowned. Professional honesty analyst Sylvestre also says Wagner’s statements indicate that he may have been cheating with Jill St John while his wife was alive.

In interviews, Robert Wagner said Natalie Wood was his “soul mate” but Sylvestre says there is a lot of stress around this description indicating it’s a dishonest statement and part of Wagner’s defense mechanism. Another criminal interrogation expert, Susan Constantine, analyzed Wagner interview about the night of Natalie Wood’s death and says she saw in his conversation “multiple areas of deceptive behavior.”

Also on the yacht the night that Natalie Wood died, in addition to Robert Wagner, was actor Christopher Walken and boat captain Dennis Davern. The captain accused Wagner of beating Wood after arguing and then delaying the search for Wood once they realized she was gone. Davern passed a police polygraph about the events of that night. 30 years after Natalie Wood’s death, investigators modified her cause of death from accidental drowning to reflect their suspicions of foul play.

Robert Wagner has continually refused to meet with police and with high powered lawyers at his side, he may be able to ride this out until his life ends to avoid accountability. Wagner is 85 so it’s just a matter of waiting out the police. Another boat was in the area when Wood drowned and Marilyn Wayne says she heard Natalie Wood calling out for help but she says she was threatened that if she spoke up, bad things would happen to her. Christopher Walken has long refused to speak up one way or another.

Davern, the captain says he was strong-armed immediately after the incident and says Wagner had his lawyer write up the statement Davern was to make to police but later said “’I signed a statement the appointed attorney drafted, one completely void of the facts surrounding Natalie Wood’s disappearance.” Davern wanted to turn on the spotlight and radio in for help to search for her but says Robert Wagner told him they would wait to see if she would return.

Davern says Wagner poured a drink for both of them and talked to him about the importance of not tarnishing his image. The boat captain has made it clear he believes that Wagner was involved in the death of Natalie Wood. Some of the questions police want to ask Wagner include whether he had violent physical contact with Wood during their argument, why the drug Darvon was in her system, why he waited five hours to alert the Coast Guard and why their children weren’t with them on the Thanksgiving holiday cruise.

Will Robert Wagner face justice or will he run out the clock and avoid answering the critical questions about Natalie Wood’s tragic death? And will Christopher Walken ever break his silence on the events of that night? He must know something if he’s refusing to talk – what could it be?