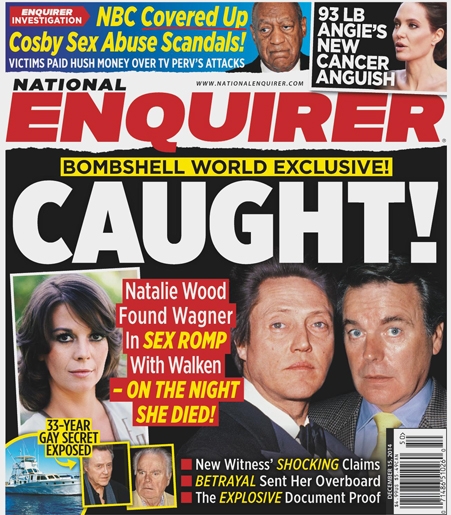 Right before Natalie Wood plunged to her death off of the coast of California, the National Enquirer reports that the actress caught her husband Robert Wagner in bed with Christopher Walken! It was the secret that has been kept hidden for the past 33 years and it has now been uncovered after witnesses have come forward with documented evidence.

A Pennsylvania based interior decorator named Robin Butillo spoke to the publication and claimed that Walken confessed to hooking up with Robert Wagner right before Natalie died. She said that Walken admitted to the dirty deed during a phone call with a a close friend.

Robin revealed in a new interview, “I’ve never told what I know about Natalie Wood’s death, but I feel it’s time to come forward. This has haunted me for years.”

Robin said that she was the roommate of that close friend of whom Walken confided in during that phone call all of those years ago. She said that they were watching television when the news of Natalie’s death made national headlines. She said, “We couldn’t believe it, and my friend was deeply concerned about Chris’ welfare.”

She said, “It was clear that Chris was devastated by the tragedy. He was upset and confessed that a ‘sex secret’ had occurred, leading up to Natalie’s death.”

Robin also signed a document stating, “Natalie had caught Walken and Robert Wagner in bed together on the boat they were all on.”

It all makes us wonder if what Natalie saw on the night she died on that coast was responsible for the unfortunate circumstances surrounding her death? Perhaps if she didn’t find them in bed together, she might still be alive? We’re not saying that’s what happened, but it could make perfect sense, right?

What do you think happened on that fateful night that claimed the life of Natalie Wood?