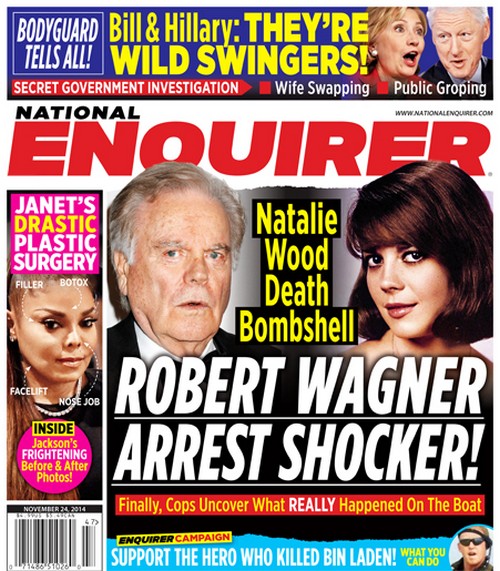 Robert Wagner is still evading authorities over the details of Natalie Wood’s death, decades after the murder took place. However, Natalie’s sister, Lana Wood, has opened up in an interview with the National Enquirer, and she’s still firmly of the belief that Robert Wagner should be arrested for his part in her sister’s murder.

The details surrounding the Natalie Wood case are still murky at best, but there’s one thing that no one’s denying – Natalie Wood was murdered, clear as day. Unfortunately, Hollywood stars often get away with a slap on the wrist, even for things like fraud, drugs, and murder. But Lana Wood wants Robert to be found guilty and punished, with or without the evidence that puts him there. She told the Enquirer, “Because he’s Hollywood royalty, they’ve treated him with kid gloves. I want to know what really happened to Natalie so this case can be closed and she can rest in peace.”

Robert Wagner has continued to evade police summons to answer questions about Natalie’s murder, and technically, he’s under no obligation to until he’s arrested – Lana’s right about that part. But with the justice system being what it is, there is no one present to take Robert into custody and sift through the details of Natalie’s case, especially since it’s been so long since the actual murder. Lana might have to settle for remembering her sister in peace, even if her murder never gets solved.

The Enquirer also has a feature on Janet Jackson’s frightening plastic surgery, and I have to say, frightening is pretty accurate. Have you seen her face lately? I don’t want to invoke Michael Jackson’s memory in vain, but Janet is taking after her dearly departed brother in more ways than one.

Finally, Bill Clinton and Hillary Clinton are apparently hiding a deep, shameful secret: that they’re swingers! HAH. Hillary Clinton is about to run for President, and the media thinks that she’s somehow hiding her secret double life as a swinger? Right.