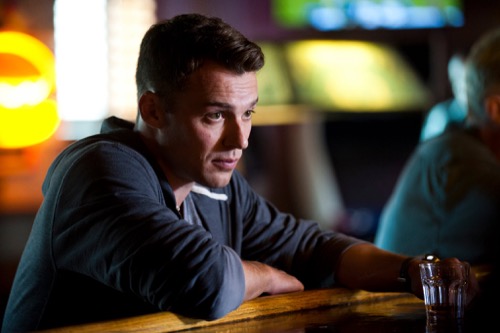 Tonight on ABC ROOKIE BLUE continues with an all new Thursday July 16 season 6 episode 4 called “Letting Go.” We’ve got your recap down below! On tonight’s episode Juliet has reason to worry about Nick, [Peter Mooney] whose estranged older brother, Finn, shows up with information about the drunk driver who killed their parents 18 years ago. Elsewhere, Dov [Gregory Smith]  and Chris kick some criminal butt when they take down a wanted MMA fighter.

On the last episode as tensions were running high in an over capacity women’s correctional facility, a riot broke out while Andy, Juliet, Nick, and Gail were there to transfer two inmates. The officers were separated and a lock-down situation leads to Andy and Juliet being trapped with a dangerous prisoner who was desperate to prove her innocence. Meanwhile, Sam showed up at Marlo’s ultrasound and stayed by her side while they anxiously wait to hear if something’s wrong with the baby. Did you watch the last episode? If you missed it we have a full and detailed recap, right here for you.

On tonight’s show per the ABC synopsis “when Nick’s estranged older brother Finn emerges with new information regarding someone directly linked to their parent’s death, Nick goes off the grid to track the man down. But Juliet notices Nick’s odd behavior and does some investigating of her own. Meanwhile, Dov and Chris successfully capture an escaped MMA fighter only to leave Dov feeling as though something is missing.”

Nick crossed the line on tonight’s episode of “Rookie Blue” and if it were not for his friends then he could have easily have lost everything that mattered to him.

Earlier Nick received a call that threw his whole day into a tailspin. His older brother, that no one knew even existed, had called him on his way to work in order for them to meet up. And, initially, Nick didn’t want to go.

His brother was the same guy that had abandoned him to the system when they needed each other the most. Such as when their parents died! Thus hearing from this other man, almost out of the blue, drudged up a lot of old feelings. Probably ones that should have been left buried.

However Nick is the sort of the guy to that shows up even when he doesn’t want to. So that’s what he did for his brother despite never having that sentiment returned.

He later met Finn at Finn’s probably rat infested apartment and he listened as his older brother explained how he recently ran into the man that killed their parents. See Nick parents had died in a car crash when he was kid. And though there’s not much he can recall, the other driver at the time was allegedly drunk and had fled the scene without assisting them. So this guy, this driver, has been at the source of Nick and Finn’s pain for a very long time.

Nick lost his entire family in one fell swoop. His parents died and his brother who was made wheelchair bound never came back for him after getting released from the hospital. But regardless of how their relationship turned out, the brothers came up with a plan on what they do if they ever saw this man again.

And that’s why Finn called Nick.

Nick had been assigned alongside Juliette, Dov, and Chris to look for an escaped imprisoner. Yet the promise he had made to Finn was just so important that he ended up basically using police resources to find track down the license plate his brother gave him. And then went as far to trick Juliette into investigating this guy with him.

So she had no idea that they were tracking his parents’ killer. She thought they were still trying to find Brody Simmons and was going to use an informant for information. Meaning Nick was on the vendetta while the rest of the squad was chasing down Brody Simmons. A mixed martial arts expert that stabbed his doctor in order to escape the hospital and police custody.

Brody was in fact in the middle of chemotherapy when he made a run for it. So when the APB first went out – the cops were looking to find him still shabby. However the quick glimpse that Dov and Chris got showed a man that had actually freshened up.

And that led to them searching the nearby area to see where Brody may have stayed for the last couple of hours.

But that led to the guys finding a woman claiming to be Brody’s wife. She eventually admitted that they weren’t married. That were only simply dating but she was kind of woman that had met Brody on a prisoners dating website. So, honestly, she wasn’t all there.

Though the last part was what worked in the police’s favor.

This girlfriend of Brody’s wasn’t looking for a real relationship. She merely wanted to claim that she was in one and waiting for him to get out. However the truth was that she never wanted him out.

So this girlfriend wanted to keep him in prison and away from his ex that left him when he went in. And because this girl stalked his ex, the police had an address where they could find Brody. Apparently, he thought he was dying and he wanted to one more chance with the woman he actually loved.

And it was as Brody was getting arrested for the second time, that Juliette stumbled across Nick almost killing the man cause the car accident.

For it was an accident. What Nick had been told and what had happened were two different stories. Finn had said the other man had plowed into their car. Yet he failed to mention that he was the one driving that night and that he had ran a light thereby causing the accident. So all of his “let’s kill this guy” was stemming from his own grief and once Nick had figured that out – he didn’t want to hurt anyone.

Juliette had put the pieces together. Thus she knew what Nick wanted to do and had tried to talk him out of it. Though, in the end, he came to that decision to leave well enough alone.

And what he had nearly gone through with Juliette is what brought them closer.In the the last scenes of this episode, these two took their relationship to a whole new level.

As for Dov and Cruz, they were asked to drop that case with the bombing and instead chose to continue working on it in their free time.

So this episode was explosive too say the least!