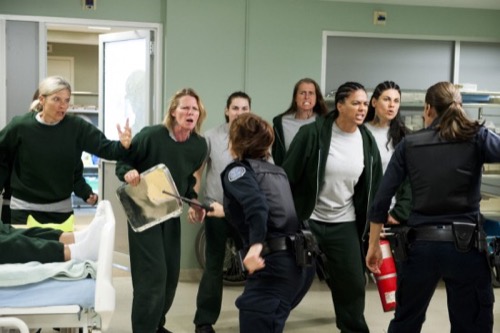 Tonight on ABC ROOKIE BLUE continues with an all new Thursday July 9 season 6 episode 3 called “Uprising.” We’ve got your recap down below! On tonight’s episode a riot breaks out at a women’s correctional institute while Andy, [Missy Peregrym] Juliet, [Erin Karpluk] Nick [Peter Mooney] and Gail [Charlotte Sullivan] are there to transfer prisoners. When the facility goes into a complete lockdown, two of the 15 Division officers find themselves trapped with a dangerous inmate who is desperate to prove her innocence. Elsewhere, Sam shows up at Marlo’s ultrasound.

On the last episode Andy debated her future with Sam after receiving the heart-breaking news that Marlo was pregnant with his baby. But Andy’s ideas about what made a perfect family are put into perspective when she met an out of control teen who needed to be protected from her own conservative family. Meanwhile, Nick and Juliet’s star-crossed romance started to feel inevitable when they’re sent on duty together on Juliet’s first shift at 15 Division — if only she saw things that way. Did you watch the last episode? If you missed it we have a full and detailed recap, right here for you.

On tonight’s show per the ABC synopsis “as tensions are running high in an over capacity women’s correctional facility, a riot breaks out while Andy, Juliet, Nick, and Gail are there to transfer two inmates. The officers are separated and a lock-down situation leads to Andy and Juliet being trapped with a dangerous prisoner who is desperate to prove her innocence. Meanwhile, Sam shows up at Marlo’s ultrasound and stays by her side while they anxiously wait to hear if something’s wrong with the baby.”

A prison riot broke out on tonight’s episode of “Rookie Blue” and unfortunately some of Canada’s Finest were caught on the wrong side of the locked doors.

Andy, Gail, Nick and new girl Juliette were tasked with the transfer of two women. Volatile inmate Kenzie Grant and her much quieter travelling buddy for the day Rochelle Dawber. But, unfortunately, for both Andy and Juliette it was their inmate that wanted to get into a fight on her last day at the prison.

Kenzie was about to be sent to maximum prison for allegedly stabbing her bunkmate/former best friend. And if there was any doubt then the eye-witness’s testimony kind of sealed her fate.

However, Kenzie swore it wasn’t her that shanked her friend in the showers. In fact, she claims the prison guard that claimed to have seen everything was actually in on the cover-up. So to get to the bottom of what really happened – Kenzie went about starting a riot.

She got into a shoving match that started another shoving match and, by time Andy found her, she was bleeding from a stab wound. A wound that was in fact self-inflicted as a part of a grander plan but neither of her escorts knew that until it was too late for them.

Kenzie’s had played up the whole wound thing in order to get the officers to bring her to the infirmary. Though their plan was to get her out of the prison and bring her to the hospital. So it was as they were trying to safely escort her out that she pulled a knife on Juliette.

Kenzie had taken her prisoner and she demanded that Andy bring her to the infirmary where she could see her friend.

“Jay-Bird” as she’s affectionately known as was still recovering there. And Kenzie for one wanted to hear what really happen because there was no way her friend who would stand by while she got sent away for attempted murder. Or at least that’s what she thought when she first set out.

The other woman says it was Kenzie and yet, with everything that she did till then to contradict, no one else in the room believed Kenzie had hurt her friend. And before Kenzie could even convince her friend to start telling the truth, Jay-Bird began to flat-line. So Kenzie then demanded that the officers help save her friend.

Kenzie didn’t really trust Juliette but she had no other choice.

Apparently, the inmate remembered the officer as some drug dealer’s girlfriend but all the way up to she had the knife at her throat – Juliette denied ever meeting her. So, ultimately, Andy found out something about Juliette and Juliette tried to come with another lie to keep Andy from getting suspicious.

Juliette later told her that she got mixed up with the wrong sort of guy but Andy didn’t look like she was buying and Juliette was purposely lying horribly. It seems like she’s finally started to feel bad about being a plant and the prison thing ended up giving her bond with Andy.

For they were able to save Jay-Bird and afterwards they helped apprehend the real woman that stabbed her.

Rochelle Dawber, who initially came across as such a delicate bird, was sadly a sociopath. And according to the eye-witness that later changed his story, it was Rochelle that stabbed Jay-Bird after she found out the other woman was encroaching on her turf. Apparently, despite their illicit relationship, Rochelle didn’t want to share her prison guard and she was willing to kill to make a point.

So, when Rochelle showed up at the infirmary, it was to finish what she started. Though luckily Nick along with the rest of task force was there to put a final end to this.

They calmed down the prisoners and they evacuated the place of their own people. Including Gail who was separated from everyone else and began an interesting conversation with an inmate that killed her husband after he accidentally killed their kids. So, in the end, Gail got some much needed parental advice that she would never have gotten from say someone like her mother.

And speaking of parenting, Marlo and Sam found out they were having a girl. The doctor is going to have to closely monitor the rest of the pregnancy but for now there doesn’t appear to be anything wrong.

They still have to work out how they’ll raise their daughter with a mommy, daddy, and an Andy but the baby being healthy took top priority. And the rest, Sam said they’ll deal with.

But, ah, Duncan asked out Chloe and I don’t know how I feel about that. Should two crazy people go on a date or should there be a normal nearby to counteract?