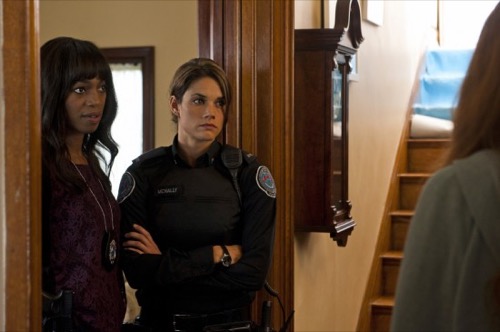 Tonight on ABC ROOKIE BLUE continues with an all new Thursday July 2 season 6 episode 2 called “Perfect Family.” We’ve got your recap down below! On tonight’s episode Andy [Missy Peregrym] debates her future with Sam [Ben Bass] after learning that Marlo is pregnant with his baby; at the same time, she meets an out-of-control teen who needs to be protected from her own conservative family. Elsewhere, Juliet is paired with Nick for her first shift at 15 Division.

On the last episode three weeks after the evidence room bombing, Andy and Sam returned from a much-needed vacation, ready to work. But when Andy was attacked by an intruder at Traci’s place, and when the Sex Crimes Unit stepped in to handle the case in their own way, 15 Division had to decide whether to take matters into their own hands. Did you watch the last episode? If you missed it we have a full and detailed recap, right here for you.

On tonight’s show per the ABC synopsis “Andy debates her future with Sam after receiving the heart-breaking news that Marlo is pregnant with his baby. But Andy’s ideas about what makes a perfect family are put into perspective when she meets an out of control teen who needs to be protected from her own conservative family. Meanwhile, Nick and Juliet’s star-crossed romance starts to feel inevitable when they’re sent on duty together on Juliet’s first shift at 15 Division — if only she would see things that way.”

There’s a missing girl on tonight’s episode of “Rookie Blue”. And yet the young man that was believed to have kidnapped her now claims he was actually saving her.

16 year old Hayley Hill recently moved into the area with her family. Her ultraconservative family that rarely allows her to go anywhere on her own much less socialize. And so Hayley was reported as not having any friends.

And, honestly, how could she? Her parents didn’t want her to become affected by unruly influences. So they never allowed her to go to dances. Or have any interaction with members of the opposite sex.

Yet the chief suspect is fighting Hayley’s parents’ assumption.

Connor Frye says he’s Hayley’s friend. And while normally the police wouldn’t believe someone who has a record from when he was teenager and reportedly coerced an even younger girl into doing sexual acts – Connor can at least back up these claims. Not only did he swear he never hurt the teenager but to prove it he brought them to where Hayley was hiding.

So, really, Hayley was just fine. In fact she was better off with Connor than she was with her parents. Because, apparently, her father can be very abusive towards both her and her brother.

Hayley says her dad once poisoned their dog just to make her watch. Allegedly, it was supposed to serve as some sort of lesson against further disobedience. But then Hailey went on to say even more seriously disturbing things. See she later told Traci that her father had told her that a surgeon had come over to the house when she was younger in order to sew up demon inside of her.

Hence Traci stopped assuming Hayley was just a wily another teenager and seriously began to worry about sending the runaway back to her parents.

And with concerns for Hayley’s safety being their chief concern, the squad then opened an investigation into Lloyd Hill. However what they found out was actually a lost worse than what Hayley had been telling them.

Hayley’s mother had never been in the garage. So the older woman had no idea that her husband was making their daughter sleep in a freezer surrounded by obvious signs of dirt and what looked like torture equipment. And after she had seen for herself, Mrs. Hill finally gained some munch need courage.

She took the officers’ advice and she left her husband.

A safe house was found for them and there Traci and Any tried to help her figure out what was next. They told her to get a restraining order. And then they did their best to calms her when she began to doubt leaving her husband would be husband.

But while the adults were off trying to cool his mother down, Hayley’s brother Jeremy ended up calling his father when no one was looking.

Thus Lloyd went on the rampage. He lashed out the police for daring to interfere with his family. And somehow he found Connor.

Cops had to pull Lloyd off the young man. And even though he was later arrested for assault, no one doubted he would soon be out thanks to it be a first offence. So his family wasn’t safe.

And as it turns out, Jeremy wasn’t safe to be around either.

Jeremy had learned from his dad how to treat disobedience. So again when no one was looking, he poisoned his sister for her actions. And now he’s facing more time in juvie than his father ever will in jail.

So Andy told Ellen Hill to take control of her family. If she ever wants to regain custody of her son then she has to prove she’ll provide a good home for him. And after she was done speaking to her, Andy ended her frosty silence with Sam.

Andy had always wanted the perfect family but upon seeing how a seemingly perfect family can go wrong – all Andy wants is Sam. So she told him that she was going to love his child no matter what. And that their family could be whatever it wants.

But Chris is stupid.

He found out his affair with a married woman was actually making her husband happier at home. So he then decided to continue with the affair. And the fact that this woman’s husband is his boss is just something that works in his favor.

And as far as we know, Juliette is spying on her own squad though it’s still unclear who she’s working for. So, seriously, when will the answer be revealed? Because it’s kind of important to know if she’s from IA or if her secret investigation has anything to do with the bombing that happened a couple of months ago?