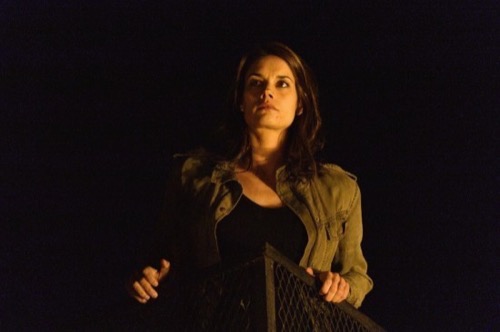 Tonight on ABC ROOKIE BLUE continues with an all new Thursday June 25 season 6 premiere episode called “Open Windows.” We’ve got your recap down below! On tonight’s episode in the Season 6 premiere, Andy [Missy Peregrym] and Sam [Ben Bass] return to work following a much-needed vacation after the evidence room bombing. But before long, life throws them another curveball when an intruder attacks a member of 15 Division and the Sex Crimes Unit steps in to take control of the case.

On the last episode Andy McNally and Sam Swarek were in such a good place that she just couldn’t help but felt like she was waiting for the other shoe to drop. So when Andy learned her former rookie, Duncan, was back on active duty and hoping to reconcile, she was sure that this was what her anxiety was anticipating. But it’s all hands on deck when a car bomb exploded in a downtown parking garage – quickly followed by a second explosion at a busy local intersection. Duncan, eager to prove himself, went rogue – only to come face-to-face with the car bomber. Now, it was up to Andy and Nick to get the situation under control and save Duncan before they ran out of time. Did you watch the last episode? If you missed it we have a full and detailed recap, right here for you.

On tonight’s show per the ABC synopsis “three weeks after the evidence room bombing, Andy and Sam return from a much-needed vacation, ready to work. But when Andy is attacked by an intruder at Traci’s place, and when the Sex Crimes Unit steps in to handle the case in their own way, 15 Division must decide whether to take matters into their own hands.”

A few weeks off seem to have done everyone some good. But now that they’re back and the station is at least safe enough to work in – everything is about to change!

Last season, not only did a deeply disturbed man threatened the entire force but he had the whole city on lockdown. Yet, for some of the guys, what was scarier than the numerous bombs he planted throughout the city was his conspiracy theory. This man claimed there was corrupted officials acting within the police department.

And then right before he handed over some of his alleged evidence, he was mysteriously found dead from a suspected suicide.

So not everyone is assured as they should be. Dove, for one, still has a lot of questions and it doesn’t look like he’s willing to let go of them anytime soon. Though the same could be said of his grudge as well.

After Chloe went through a whole scenario of trying to hide her conversation with her ex-husband, Dov doesn’t trust her. In fact, you could say he’s done with her. He repainted the wall they did at his place. And he’s also made it uncomfortable for his friends to continue to be Chloe’s friends.

Hence, at the moment, she counts Nick as her only friend. Nick has been the one to stay by her side while she’s healing. And he’s her workout body. But sadly Nick is looking to leave.

He says there was nothing for him there. And what with everything that happened (with both Andy and Gail) – he felt like he should leave. Yet later on someone changed his mind.

Remember Juliette. The girl he kissed and who then shunned him. Well, it appears that she had a very good reason to ignore him. See Juliette is actually a cop and she’s recently transferred to the precinct. So she didn’t want to be one of those women that ended up dating a fellow cop.

She said that caused complications and Nick can definitely attest to that.

His ex, Andy is now seeing another cop at their station. And for a while it was hard on him. But now Andy has to deal with the something that puts her in an even worse position.
Officer Cruz told Sam that she was pregnant.

The baby is Sam’s and Cruz said that she didn’t need anything from him but growing up with a fractured relationship with his own father might make Sam want to take a part in his child’s life.

So Sam was going to tell Andy about the baby but before he got the chance someone attacked her at Traci’s apartment. Andy was on actually the phone with Sam when everything happened. She was grabbed from behind and someone tried to drag her. But she was able to fight this person off.

Thus an investigation had to be opened into a possible intruders in the area. Though instead of intruders, the squad came across several rape cases involving the same MO. And the detective on the case was trying to keep that everything happen on the down low.

According to one of their own, a simple warning as in telling women a serial rapist was on the loose would have frightened said rapist into seeking newer ground. So the rapes were mostly kept a secret. And the detectives in that unit didn’t want any extra help.

But, fortunately, no one was paying any attention to them. And that’s how Dov found a pattern. Before the rapist attacks, he sends his victim flowers.

Apparently, he’s what they call a gentlemen rapist. He believes the open windows or balcony doors were in fact invitations. And that he has a relationship with each of his victims.

The guys didn’t catch him. They used the flowers to find his next victim and then they mistakenly arrested the wrong man. Thus allowing the real culprit to get away.

So, of course, Sex Crimes were pissed. The squad did the one thing they had warned them against. And now the rapist could be anywhere.

And if that wasn’t enough, Sam finally told Andy about the baby and no surprise the news scared her off. Andy didn’t know what she wanted to do next. And the only thing she could do was give herself some space. So she had Traci drive her home.

Then, back at the station, Dov and Cruz decided to team up to see what really happened to their bomber Ted McDonald. Did he kill himself or is there something bigger at play?