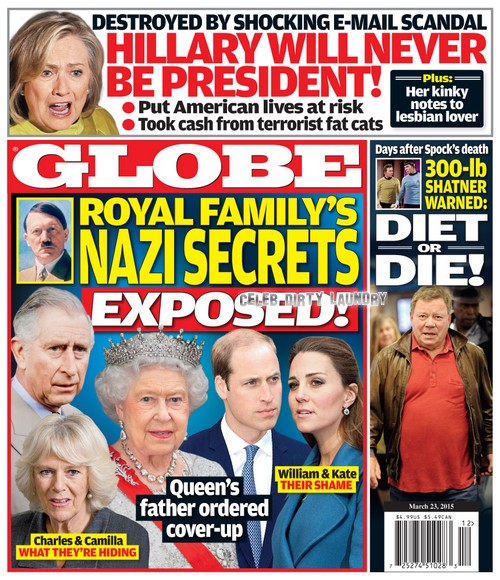 The Royal Family is plagued with scandals today – and that has been the case for several generations. Now, Queen Elizabeth’s family’s secrets and Nazi ties and cover-ups from several decades ago are coming back to haunt her, Prince William, Kate Middleton, and the rest of the Royals. It’s no secret that the British Royal Family has a German background, the Royals’ original name was Saxe-Coburg and Gotha, but Queen Elizabeth’s grandfather King George V wisely changed their last name to the prominent English name Windsor during World War 1.

The March 23rd cover of GLOBE Magazine teases an exciting expose on the Royal Family and their ties to the Nazis in Germany. This week’s headline screams, “Royal Family’s Nazi Secrets Exposed: Queen’s Father Ordered Cover Up.” The shocking cover goes on to tease that Prince William and Kate Middleton are ashamed of their family’s past – and Camilla Parker-Bowles and Prince Charles are hiding something as well! Our friends at GLOBE always report on controversial topics that other media outlets won’t touch with a ten foot pole. Believe it or not Queen Elizabeth’s father King George VI truly was involved in a major cover-up involving her uncle Edward, who was openly associated with Nazis in.

In other celebrity gossip news, the all new cover of GLOBE Magazine teases an exciting article on the email scandal that is currently rocking Hillary Clinton’s camp and alleges that she may never become President because of it. Also, just days after losing a Star Trek legend – we learn that William Shatner is not far behind his costar Leonard Nimoy. The GLOBE cover shows a startling picture of a very obese William Shatner and reveals that he has hit 300 pounds and his doctors told him to “diet or die.”

So, were you aware of the Royal Family’s ties to Nazis in Germany? Do you think there are still associations between Queen Elizabeth’s family and modern-day Nazis? As soon as this week’s GLOBE hits the newsstands we will be rushing out to get a copy so that we can dish on all of the juicy details. Let us know what you think about the scandal in the comments below and don’t forget to check CDL later this week for more info.