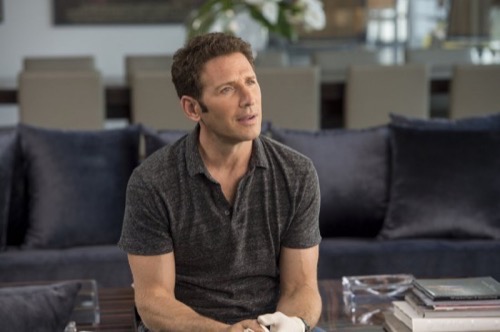 Tonight on USA Network ROYAL PAINS continues with an all new Tuesday, June 16 season 7 episode 3 called, “Playing Doctor.” We’ve got your recap down below! On tonight’s episode an actor wants to shadow Hank (Mark Feuerstein) in order to prepare for a role; Divya (Reshma Shetty) performs a genetic test on a royal patient.

On the last episode, Hank (Mark Feuerstein) treated a rookie triathlete who encouraged him to try triathlons – and online dating – for himself. Evan (Paulo Costanzo) and Paige (Brooke D’Orsay) temporarily moved into the guesthouse with Hank, and Evan revealed a startling part of his past. Meanwhile, after last week’s shocking ending, Jeremiah (Ben Shenkman) gets Divya (Reshma Shetty) out of a jam and helped her keep things in perspective when a sensationalized video of her started to spread. Did you watch the last episode? If you missed last week’s episode we have a full and detailed recap, right here for you.

On tonight’s episode per say the USA Network synopsis “an actor wants to shadow Hank in order to prepare for a role; Divya performs a genetic test on a royal patient; Evan accidentally takes his new motto of transparency a step too far; and Paige embraces chaos during a home renovation project.”

Tonight’s episode of Royal Pains kicks off with Hank Lawson recording a video for the hospital’s administrator’s blog – he wants all of the employees to know that he is “completely transparent” and they can talk to him about anything. Evan’s girlfriend tells him that the video is great – and he should upload it. Afterwards, he receives an email from the lab, his sperm count is low and that is why they are having a tough time conceiving.

Divya is ranting to Hank while she rushes around the kitchen getting ready for work. She tells him that Raffa has filed a claim that she is an unfit mother, and her lawyer won’t let her confront him about how absurd it is. She warns Hank that she might be a “bit bossier than usual.”

Evan heads out of his office and one of the doctors stops him and compliments him on his video blog. There is a commotion, nurse Margaret is kicking a man out of the hospital that is shouting that his appendix is bursting. She explains to Evan that he is just a member of the paparazzi, and is trying to sneak in to see a celebrity. Evan kicks the paparazzi out, and then rushes to the emergency room to see the celebrity – it is one of his favorite actors, Cole Chapman Smith. Cole’s arm is cut up, he reveals that Tim, the paparazzi guy hit him with his camera and now he needs stitches.

Cole tries to leave because Tim just tweeted his location, and he is going to get mobbed by fans. Evan has the perfect plan. He calls Hank to do a home visit and patch up Cole’s arm. While Hank is stitching up Cole’s arm he learns that his next role in a movie is as a doctor and he has been studying medicine. Cole is shocked when Hank reveals that you can use cattle guts to give someone stitches, if they don’t have any floss or thread on hand. Cole begs Hank to let him shadow him and go on his house calls so that he can study his work.

Divya arrives at her patient’s house. She needs to do a pre-marital genetic test on her patient. He explains that the disease has plagued his family for months – and his wife is a carrier. Divya offers to come inside and take a sample of his blood. The Prince refuses and tries to hand her a vial of blood. Divya explains that the disease is deadly and she needs to report the results to the health department – she needs to draw the blood herself from him.

At the hospital, Evan is getting a lot of positive feedback about his video blog. Margaret tells him that they are making a big deal out of nothing and there is no way he is going to be able to change the hospital. Hank arrives and tells Evan that Cole Chapman is going to be shadowing him on his house calls tomorrow. Evan can’t believe that he agreed to let the actor follow him around.

The next morning, there is a knock at Hank’s door – he doesn’t even recognize Cole, he is dressed in a disguise and trying to pass as a doctor. He even has a bag full of props, Hank goes through his bag of supplies with him, and tells him he probably won’t be needing the Rambo knife or bone amputation saw. Cole reveals that his role in the movie is as a doctor in a post-apocalyptic world, and he needs Hank to teach him how to make the patients trust him. He begins asking Hank a bunch of questions like why he decided to become a doctor. He vows to find out “what makes Hank tick.” Hank and Cole head to their house calls and visit a slew of different patients with different cases, they even visit a boy who swallowed a battery.

Divya visits Evan’s house, and his wife is waiting in lingerie to try and make a baby and is startled. Divya explains that she was just going to ask Evan for advice. She got the Prince’s blood test results back and she has to break the news to him that because of a genetic anomale he can’t marry the woman that he loves. It’s his responsibility as a Prince to have children and produce an heir, but he can’t marry his fianceé because their child will be born with the disease. Divya leaves and Hank and his wife proceed to have sex in the living room, but Cole and Hank walk in. She and Evan hide in the living room behind the couch in their underwear.

DIvya pays the Prince a visit and tells him that he and his wife both tested positive for Calaman’s Disease. She thinks he is going to be devastated because he can’t marry his fiancé, but the Prince is actually thrilled. He tells Divya that she has saved his life.

The next day at the hospital Hank pays Evan a visit, Evan is not happy because Hank still hasn’t watched his video blog. Hank lies and says that he has watched it, and tells him that it was “really great work.” But, it’s obvious that Hank is lying because he can’t even tell his brother what his favorite part is. Evan shouts that he just wants Hank to care! Evan guilts Hank in to sitting down and watching the video blog, he is shocked when he realizes that Evan accidentally posted his lab results with the video and now the whole hospital knows that he has low sperm count.

Divya sits down with the Prince, and he explains that he is happy because it was an arranged marriage – and he isn’t in love with his fiancé. Divya can sympathize, she reveals that she was almost trapped in an arranged marriage herself. She tells the Prince that he is going to have to just stand up for himself, that’s what she did was stand up to her father. Meanwhile, Paige returns home, the contractor is hard at work and their entire house has been gutted. He breaks the news to her that it could be weeks until they can move back in to the house.

Hank heads to his next patient call at the mayor’s house, and he is not happy when he arrives and sees that Cole beat him there and he is dressed just like him. The mayor, Pam has gained weight and her blood pressure is too high. Cole gives her a moving speech about getting back on her diet and losing weight, Hank is obviously bothered by the fact that the mayor is buying Cole’s act hook-line-and sinker.

After the patient call, Hank rides with Cole in his convertible – while they are driving down the road the paparazzi guy Tim that is stalking him shows up in his rear view mirror. Cole decides to outrun him and floors it down the highway, he and Cole pull over on a side road to hide from the paparazzi. Cole has a heart to heart with Hank while they are hiding out from Tim and reveals that he had a tough childhood. Cole mentions that he knows that Hank’s mother died, and that is why he really became a doctor.

After their talk, Cole and Hank realize that Tim never passed them. They hop in their car and drive back down the road and realize that Tim wrecked his car when he was chasing them. Evan hops out and rushes to Tim’s side to help him, his arm is pinned in the wrecked car. Cole and Hank get to work on Tim and manage to get his arm unpinned and save it from being amputated by releasing some of the blood flow.

Divya stops by the Prince’s house, she received a gift from him and she wants to return it – she says that it was way too expensive and extravagant. The Prince wants her to keep the diamonds, they are a thank-you gift for the great advice she gave him, he finally stood up to his father.

Paige stops by Evan’s office to comfort him, he is devastated about his video blog. She gives him a pep talk and convinces him to leave the blog up, because people are obviously responding well to how “transparent” he was by sharing his sperm count results with everyone at the hospital. Then Paige breaks the bad news to him – they are going to have to live in the guest house for a few more weeks.

Hank and Cole get Tim to the hospital and he is going to be just fine. Cole thanks him for giving him the opportunity to work with him, before he goes Cole tells Hank that he knows that his mother would be very proud of the man that he turned out to be.