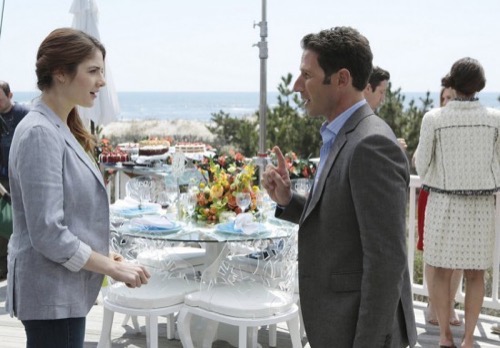 Tonight on USA Network ROYAL PAINS continues with an all new Tuesday, June 2 season 7 premiere episode called, “Rebound.” We have your weekly recap and spoilers below! On tonight’s episode in the season 7 premiere, Hank (Mark Feuerstein) helps a TV host who’s off her game; Evan and Paige (Brooke D’Orsay) buy a new home and receive unexpected news; Divya (Resma Shetty) saves the life of a young skateboarder; and Boris offers Evan an exciting opportunity.

On the last season finale Hank and Evan searched for Emma after her unexpected disappearance. Evan struggled to understand why Hank refused to join Boris’ latest endeavor. Meanwhile, as Paige and Evan finally were ready to move on from therapy, they discovered some surprising news about Bob. And while Jeremiah tried to accept the changes Viviana was making in her life, he realized he needed to make some changes of his own. Elsewhere, Divya faced a new hurdle in her custody battle, while Boris worried his disease may be catching up with him. Did you watch the last episode? If you missed last week’s episode we have a full and detailed recap, right here for you.

On tonight’s episode per say the USA Network synopsis “Hank (Mark Feuerstein) helps a TV host who is off her game and takes a big step in his personal life. When Evan (Paulo Costanzo) and Paige (Brooke D’Orsay) buy a new home and get some unexpected news, they learn the next chapter in their lives will be filled with ups and downs. Divya (Resma Shetty) gets more than she bargained for when she saves the life of a young skateboarder on the street, and Boris (Campbell Scott) offers Evan an exciting career opportunity.”

On tonight’s season seven premiere, we get to see an all new side to Hank Med. No longer are they the guys working out of their kitchen and vehicle. Now they’re proper board members and of more than just their start up.

Hank, Evan, Divya, and Jeremiah were appointed by Boris to be on the board of Hamptons Heritage. The local hospital. And recently Boris has had to inform them that the hospital has lost its administrator. Though the reasoning behind it kind of comes across as shady.

The former administrator was great at the job. And according to Hank, appeared to love the area and even the task that came with the view. Yet, out of the blue, he’s chosen to go back home because he supposedly missed it. And now Boris wants to appoint Evan as the new administrator.

So of course Evan is excited. And Hank is happy for him but it still feels suspicious. Though, really, the job couldn’t have come at a better time.

Evan and his wife have just bought their first home together and so an extra income won’t hurt. And if you want to get into particulars, they’ll soon be dealing with more than just a mortgage. See once Paige informed her husband that she was late – they needed answers. Like right away because apparently that was something new for her.

Paige swears she’s never been late in her life. So she and her husband immediately made a quick stop at the pharmacy and after three tests there was only one conclusion. They’re pregnant.

Hence Evan is freaking out. And while he tries to figure out everything they’re going to need for the future, its Hank that’s suddenly feeling like he’s the one that’s in a rut. Unfortunately for Hank, he proposed to Charlotte and she turned him down.

No explanation or if their relationship was still salvageable. She soon boarded a plane to continue on with her world adventure. And that left a heartbroken Hank unable to fix anything.

As for Divya, she once again has a secret. Though you would have never believed it in a million it seems she’s now dating her ex-fiancée. Raj was a good guy but because she was arranged to marry him Divya simply never felt “that” way about him. Yet now that she’s had a baby with someone else and he’s divorced – they have chemistry.

And as it turns out, there was no baby. All three tests that came back were false positives and that sadly became even clearer when Paige later got her period on that very same day. So, with their actions from before in consideration, there should have been a “yeah we’re not pregnant” moment between the couple. Though that never happened.

Earlier they were anxious and were each having a mini-crisis but it looks like they wanted to be parents. And they were actually settling in with the idea when the bubble burst.

So its bad news all around when Hank then had to tell his latest patient that he believes she’s suffering from Parkinson’s disease. The woman was young and she was just starting out in a very lucrative career on TV. But with her condition, she doesn’t think many people will tune in to watch her (in her own words) shake.

But Hank told her not to give up. And that’s the same advice he’s planning on using. Charlotte may not have been the one yet that doesn’t mean Hank should give up on finding love.

He made a date for dinner and he’s willing to see where it goes.

However Divya ended up in hot water on tonight’s episodes when she chose to help a young man in distress and incidentally left her infant daughter in the car alone. The cops arrived and once he felt better that young man disappeared. So sadly for her, there was no one to corroborate her story and Divya got arrested for child endangerment.