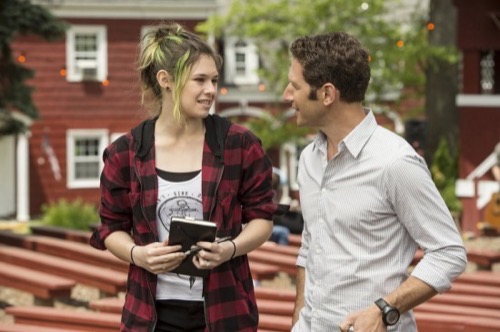 Tonight on USA Network ROYAL PAINS continues with an all new Tuesday June 23, season 7 episode 4 called, “The Prince of Nucleotides,” and we have your weekly recap below. On tonight’s episode Hank treats a transgender teenager; Evan and Jeremiah host a gala fund-raiser; Jeremiah makes a major purchase for the lab; Paige and Evan deal with an unexpected turn in their path to parenthood; and Divya grows close to Prince Quami.

On the last episode, an actor wanted to shadow Hank in order to prepare for a role; Divya performed a genetic test on a royal patient; Evan accidentally took his new motto of transparency a step too far; and Paige embraced chaos during a home renovation project. Did you watch the last episode? If you missed last week’s episode we have a full and detailed recap, right here for you.

On tonight’s episode per the USA Network synopsis “Hank (Mark Feuerstein) treats a transgender teenager and learns her life is more complicated than he expected. Evan (Paulo Costanzo) and Jeremiah (Ben Shenkman) host a gala fundraiser for the Center for Rare & Orphan Diseases and Jeremiah makes a major purchase for the lab. Meanwhile Paige (Brooke D’Orsay) and Evan’s journey to parenthood takes an unexpected turn, and Divya (Reshma Shetty) grows closer to Prince Quami.”

Tonight’s episode of Royal Pains kicks off with Hank at a kid’s summer camp. He is checking in on a girl who has shortness of breath. The teen girl thinks that he is overreacting, there is nothing wrong with her. Hank does a quick scan on her leg and confirms that she has a blood clot in her leg. He says it might be caused by estrogen in birth control. Anna ignores him and gets back on the stage to keep dancing, then she passes out. Hank runs over with his oxygen tank and checks her heart beat. He whispers to Anna, “How long have you been a girl?”

Anna is rushed to the hospital and they get her on blood thinners. Hank checks in with her and warns her that an ER doctor will come in and do a full exam. He is a little confused because her insurance paper says that her name is “Abe.” Hank is concerned. He asks if her parents know if she is taking estrogen. She admits that her mom made her promise not to take the estrogen, but she has been self-administering it.

Divya is at home with her daughter and boyfriend. He is trying to put together a baby seat that he bought. Hank heads to the office to meet with Jeremiah and Evan – they brief him on their pharmaceuticals department. Evan wants Hank to go see Olympia Houston, their richest patient – they need her to donate more money. They explain that they are trying to raise money for their genetic research department – and they want to auction off Hank’s services.

Evan heads home and Paige is a hot mess. She just left the genetic doctor – she insists that the doctor said everything is fine with her DNA, but she also found out that she is 10/14 Jewish. Evan is thrilled, but Paige has something else she wants to talk about. Apparently, the doctor that she met with thinks that they should consider adoption because she knows a teen girl that is 7 months pregnant that is looking for a family to adopt her baby. Paige was adopted herself, and she thinks that it is fate and they should adopt the teen girl’s baby. Evan isn’t exactly thrilled. He doesn’t think Paige should get her heart set on the baby – but he agrees to meet with the girl.

Hank visits Olympia. She complains that she lost her sleeping pills and her primary doctor can’t write her a prescription because he is out of the country. She desperately needs pills; she hasn’t slept in days. Hank agrees to write her a prescription for two days until her doctor returns. Then he goes to the hospital to meet up with Anna and check in on her. He says that her parents are flying in to make sure that she is okay, and they have some concerns.

In the lab, Evan and Jeremiah are discussing the adoption. A salesman named Jim McGuire arrives to try and sell them equipment – it turns out he was Jeremiah’s roommate in freshman college. He jokes about Jeremiah’s nickname, “J-Sack,” and teases him about an old girlfriend he had named Sandra.

Divya heads to the Prince’s house because they have a meeting – she has to speak to his father, the King, on the phone and discuss the genetic test results. She brings along her daughter and is surprised to see that the Prince bought a playhouse for Divya’s daughter, and hired a nanny to watch her while they are meeting. Afterwards, the Prince surprises Divya and asks he rout on a date. She turns him down at first, but then he convinces her to attend the fundraiser with him tomorrow.

Evan and Paige head to the lawyer’s office to meet the pregnant teen that is looking for adoptive parents – she is adamant that she is giving up the baby. She says that she is doing it whether it was them or someone else. Alanne feels uncomfortable because she didn’t know that Evan and Paige were white – and she isn’t sure that they will be a good fit for her baby.

Hank heads to the summer camp to check in on Anna. She says that she feels great and doesn’t have any shortness of breath. Anna reveals that she talked to her bunk mate and even confessed that she was transgender and they are cool with it. Hank has bad news though. Anna has a blood-clotting condition and she can’t keep taking estrogen. Anna is devastated because this means she can’t start the hormone replacement theory.

McGuire visits Jeremiah again in the lab. They reminisce about their college days and McGuire apologizes for being a jerk to him when they went to school together. McGuire reveals that he used to work at Criteria, the company where Jeremiah and Evan just bought new equipment. He tells Jeremiah that Criteria’s new equipment is not up to par. McGuire convinces Jeremiah that he and Evan should put a bid in on the equipment that he is selling instead.

Hank receives a call from Anna’s bunkmate in the middle of the night – it’s an emergency. Apparently, someone jumped Anna in the middle of the night and beat her up because she is transgender. Hank rushes into examine Anna, she begs him to just leave her alone, and has bruises all over her face. Hank is concerned because Anna’s blood pressure is so high, he thinks that she may have internal bleeding, and her adrenal gland is ruptured. Hank administers some beta blockers to bring down her adrenaline and heart beat. He promises to stay with her until she stabilizes.

Evan heads to the fundraiser and meets up with Paige. She is a little upset that the meeting with the teen mother did not go well. Evan reassures Paige that they can try again, and he thinks adoption is a great idea for them – they just need to find another birth mother. Meanwhile, Divya is sitting at the Prince’s table with him. They discuss their mutual love for Europe. Divya wishes she could move out of the country but she has custody issues with her daughter’s father.

Hank arrives and Evan begins auctioning him off. He’s not happy when he realizes that he is being auctioned off as a bachelor and not his doctor services. His patient Olympia purchases him for $100,000. After the auction, Evan takes Jeremiah aside and tells him that McGuire played him. His old company actually fired him and it was just last month – not last year. After the fundraiser, Divya goes for a walk with the Prince and he surprises her with a kiss, she apologizes and admits that she is seeing someone but it is “complicated.” The Prince seems unfazed, he says that he doesn’t mind a little competition. Hank heads to the summer camp to watch Anna’s big theater production that she has been working on and choreographing.