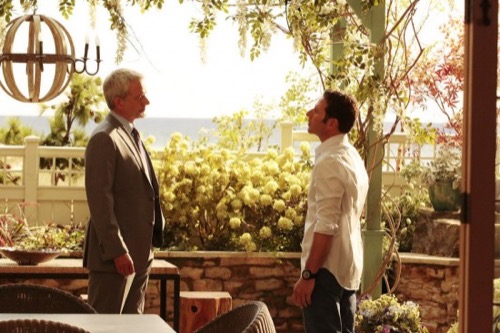 Tonight on USA Network ROYAL PAINS continues with an all new Tuesday, June 30 season 7 episode 5 called, “Voices Carry,” and we have your weekly recap below! On tonight’s episode Hank [Mark Feuerstein] accompanies Olympia to Manhattan; Evan [Paulo Costanzo] suspects that Boris [Campbell Scott] is keeping a secret from him.

On the last episode, Hank (Mark Feuerstein) treated a transgender teenager and learned her life was more complicated than he expected. Evan (Paulo Costanzo) and Jeremiah (Ben Shenkman) hosted a gala fundraiser for the Center for Rare & Orphan Diseases and Jeremiah made a major purchase for the lab. Meanwhile Paige (Brooke D’Orsay) and Evan’s journey to parenthood took an unexpected turn, and Divya (Reshma Shetty) grew closer to Prince Quami. Did you watch the last episode? If you missed last week’s episode we have a full and detailed recap, right here for you.

On tonight’s episode per the USA Network synopsis “Hank (Mark Feuerstein) goes to Manhattan with Olympia (guest star Vanessa Williams), but their time away together isn’t exactly what he expected. Evan (Paulo Costanzo) fears Boris (Campbell Scott) is keeping a secret from him within the hospital, and a surprise visitor from her past leads Divya (Reshma Shetty) to feel overwhelmed by the men in her life. Paige (Brooke D’Orsay) is eager for her home renovations to be finished and is shocked when she discovers the reason for the delay.”

Tonight’s episode of Royal Pains kicks off with Paige heading in to the house to check on the contractor Gus’s progress – the house is still destroyed. She rants that they are adopting a baby and she will be there in 3 months, their home needs to be done by then. Paige shouts that she needs progress, Gus reassures her that he is “on it.”

Evan is briefing Hank and Divya on work for the week, but they just want to talk about Evan and Paige’s baby. Evan passes out baby registries to them. Hank reveals that he is going out of town with Olympia Houston. Evan is impressed, he says that Olympia is a “King Maker,” and every man that she marries winds up building an empire. Hank and Evan head to work, and Raj shows up to pick up the baby from Divya. They think they are all alone and Raj leans in for a kiss – Paige walks in and catches them and is shocked. Raj runs off and Paige questions Divya, she thought she was dating the Prince that was at the auction with her. Paige reassures her that she won’t tell anyone her secret.

Hank heads to his first appointment and checks in on Boris – Evan interrupts and says that he needs to speak to Boris in private. Evan can’t believe that he sent Jeremiah on a business trip to the center of rare diseases without any warnings, Jeremiah is their employee and his abrupt absence is messing up their scheduling. Boris doesn’t want to hear it though. Hank has another problem – the robotic arm they had on loan is missing. Boris tells him not to worry about it, it’s not missing, it was recalled and sent back.

Hank heads to NY with Olympia, she has to stop by a United Nations summit first. Olympia spots Dr. Salba and rushes over to introduce him to Hank. It turns out Dr. Salba speaks little to no English, he goes to get his interpreter Nina and she is distracted and run down by her taxi. Salba and Hank rush to her side and work together to pop her dislocated shoulder back in to joint. Hank and Olympia get to know Nina after Hank gets her arm in a sling, she admits that she is a little overwhelmed by the summit and trying to interpret for Dr. Salba – apparently he is a bit demanding.

Evan has lunch with Paige and she briefs him on her meeting with their baby’s birth mother – she is moving to the Hamptons for the last few months of the pregnancy. Evan rants to Paige about his meeting with Boris, he doesn’t understand why he is sending Jeremiah to do his job. Paige tells Evan to “take Boris by the horns” and prove to him that he chose the right man to run the hospital. She suggests he starts by finishing the asset tracking he has been working on.

After fixing up Nina, Hank and Olympia head up on the roof of the hotel for drinks since they missed their dinner reservation. Olympia is impressed now that she got to see Hank at work. She thinks he should apply for the deputy director position at the World Nation, she offers to put in a good name for him. Hank jokes that maybe she really is a king maker, Olympia points out that she doesn’t make men extraordinary, she just only dates extraordinary men.
They head to the summit at the world nations, and Hank is shocked when Dr. Salba puts him on the spot and asks him for his opinions on the smoke inhalation problems in the Iraq. Hank thanks they should be ventilating the rooms more properly, Dr. Salba is impressed with Hank’s input – but then his interpreter Nina starts staring up at the ceiling and stops translating for him. Hank rushes to her side, he can tell that she is having a seizure.

Once Hank gets Nina’s seizure under control he explains to her that her temporary lapses of awareness are actually seizures – he thinks that is how she got in to the run-in with the taxi the other day. Now, they just need to figure out what her trigger is. Hank wants to take Nina to the hospital, but she complains that she can’t leave the conference because there aren’t any more interpreters on standby and the meeting is resuming in a few hours.
Hank decides to play the tape from the meeting back to see what is causing her seizures. He plays back the last sentence of what Dr. Salba was saying and once again Nina has another seizure. It is Salba’s voice that is causing Nina’s seizurers. So, Hank has a plan – when the meeting adjourns, he has Dr. Salba’s voice dubbed so that when Nina hears it she can translate it properly without having another seizure.

Evan heads back to work and is upset when he doesn’t receive the asset tracking report. He heads to Boris’s office and finds out that Boris has the asset report sent directly to him, he won’t even let Evan see it. He tells Evan that his plate is already full, and his main priority needs to be the computer systems. Boris leaves for a meeting and Evan goes through his desk and looks at the assets report. He comes across a secret box in Boris’s desk, he puts his finger in it and it turns on and pokes his finger. It takes a sample of Evan’s blood and then says access denied and won’t turn on.

Paige checks in on Gus’s progress at the house and Dviya stops by. She thanks Paige for not telling anyone about Raj, or the Prince, and confesses that she is going to dinner later with Raja. While they are talking Gus tries to sneak upstairs – and falls through the horrible banister he put up. Dviya and Paige rush to his side and call 911. Dviya notices his bone has broken and is sticking out of his leg, Paige helps her break it back in to place and then rushes upstairs to search for a towel to soak up the blood. She is shocked when she heads in to the nursery and realizes that Gus has been living there, and he even has a microwave and a TV set up.

Hank and Evan head out to lunch, Evan tells him that Boris is up to something. He tells him about the box that poked his finger – he thinks that Boris is selling equipment and the robotic arm to the Chinese. Hank thinks that Evan has gone crazy, he tells him to just “let it go.” Hank heads back to the hospital and he is not letting it go – he heads to the lab and looks for a sample of Boris’s blood, he steals one of his test tubes out of the cooler.

Later that day, Boris corners Hank, he tells him that Jeremiah was acting strangely and he was stressed out over a mistake that he made in the accounting department. Boris rented him out one of his country homes to give him a chance to relax and get himself together – but now Boris is worried because Jeremiah is missing and he never showed up at the country house. Meanwhile at the office, Evan breaks in to Boris’s office. He uses his blood to hack in to the little black box that requires a blood sample to turn on. It opens up a secret door in Boris’s office that leads down a tunnel to a lab inside the hospital that Evan never knew existed, inside the lab Evan finds all of the equipment that seems to have been missing. While he is snooping around the lab, Boris walks in and catches him and he doesn’t look happy.