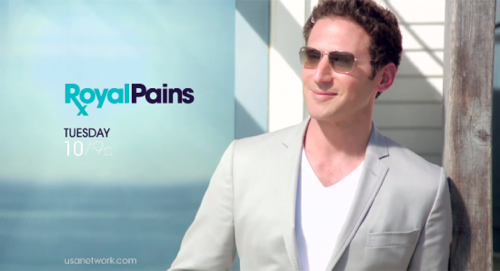 Tonight on USA Network ROYAL PAINS continues with an all new Tuesday, July 21 season 7 episode 8 called, “Lending a Shoulder.” We’ve got your recap down below! On tonight’s episode Hank [Mark Feuerstein] has an epiphany after running into his former fiancé; Evan [Paulo Costanzo] and Paige [Brooke D’Orsay] help Elán through her labor; and Divya envisions a new future for her career and family.

On the last episode, Hank (Mark Feuerstein) helped Boris (Campbell Scott) prepped a secret patient for surgery as Evan (Paulo Costanzo) tried to chase a bad omen out of the hospital. Meanwhile an offer from Quami (Wole Parks) lead Divya (Reshma Shetty) to make a major decision about her personal life. Did you watch the last episode? If you missed last week’s episode we have a full and detailed recap, right here for you.

On tonight’s episode per the USA Network synopsis “Hank (Mark Feuerstein) runs into his ex-fiance Nikki (guest star Maddie Jo Landers) and has a startling revelation. Evan (Paulo Costanzo) and Paige (Brooke D’Orsay) help Elin (guest star Dominque Fishback) through her labor and learn their first tough lesson about being parents. After suffering a devastating loss, Divya (Reshma Shetty) envisions a new future for her career and family.”

Tonight’s episode of Royal Pains kicks off with Paige and Evan at the doctor’s office with the pregnant teen mother, they are adopting her baby in two months. Paige asks Alanna to go out to lunch with her afterwards so that they can discuss their plans for Elan to move to the Hamptons before the baby is born. Evan warns Paige that he doesn’t think she should be going out to lunch with Elan, they shouldn’t go so attached to the birth mother. Paige explains that she was adopted and she knows that one day their daughter will have questions about her birth mother and Paige wants to be able to tell her.

Hank is excited because he has a date with a woman named Gretta that he met online he brags about it to Divya. First he has some appointments to go to, he heads to a new client named Bruce Beeman’s house. He is getting married tomorrow and he spraigned his ankle. Hank is examining Bruce when his fiancé walks in – he is shocked when he realizes that Bruce is marrying his ex-fiancee Nikki.

Hank heads out to lunch with Evan and tells him about his awkward run-in with Nikki. Evan can’t believe that Hank didn’t curse Nikki out because she is a “demon seed” and “downright evil.” Hank has a flashback of his last fight with Nikki, Evan obviously doesn’t know the entire story – he tries to defend Nikki and says that she isn’t all that bad. Evan is shocked, he realizes that Hank isn’t over Nikki and that is why he still doesn’t have a new girlfriend.

Hank meets up with Divya and she shows off her new car to him. Hank begs her to let him drive but she tells him there is not a chance. They hit the road and head to Divya’s grandma’s house. Her Grandma loves Hank and she is hoping that she will be a little friendlier if Hank is with her. On the way there Divya fills Hank in on her relationship problems and breaking up with Raj again for the second time.

Paige totally disregards Evan’s advice, and she takes Elan to their house after lunch to show her the baby’s room and all of the stuff they have gotten for her. Elan is obviously not comfortable with the situation and says she needs to get to the bus station and go home. While she is leaving the nursery, her water breaks – even though she isn’t supposed to have the baby for two more months.

Divya and Hank arrive at her grandmother’s house and her Aunt Kiri answers the door dressed in white. She tells Divya that she is too late. Divya puts on a white gown and heads in to her grandmother’s bedroom where they are chanting and saying prayers and lying flowers on her body. Hank stands off to the side and watches the ceremony.

Meanwhile, Paige and Elan rush to the hospital and prepare for the arrival of the baby girl that Paige and Evan will be adopting. Paige and Evan are shocked when they learn that Elan won’t be taking any drugs and plans to give birth to the baby naturally. They offer to call Elan’s mother, Elan tells the she doesn’t want her mom to come – her mom doesn’t want anything to do with the baby or the adoption, she just wants it to all be over.

After the funeral, Hank heads to his patient Bruce’s house. Bruce snarks that he knows Hank only came back to his house to see Nikki. Hank insists that he came to see Bruce and he thinks that he has a bloced artery. Bruce says he would rather see his own doctor, and doesn’t want to see Hank again unless he his coming to apologize to Nikki for dumping her and breaking her heart.

Divya is driving down the road and traffic is backed up for miles. A man rushes through the traffic and is calling for a doctor – there was an accident, and some guy flew off from his motor cycle. Divya grabs her medical bag and rushes to the crash victim – his face is covered in blood and he is unconscious. She orders one of the witnesses to help her, she tells him to squeeze the oxygen bag while she puts a tube up the victims nose to clear his airways. The ambulance arrives, and they successfully get a tube in his lung before he is rushed off to the hospital.

Nikki calls Hank and meets up with him, she is worried about her new fiancée Bruce because he seems to have memory loss. Hank tells her that he cant discuss Bruce’s health with her. They begin arguing about their break-up and Hank reminds her that she is the one who broke up with him, and he has a date later with a marine biologist. Nikki snarks that she has bad choice in men and Hank storms out and knocks over a waiter.

The next morning Divya has breakfast with Hank, he says that his date Gretta cancelled on hi last minute. Divya fills him in on the crash victim that she saved – Hank says that she is the talk of the hospital. Divya admits that yesterday she realized her true dream is to become a doctor and she is going to apply to medical school. Hank tells Divya that she is going to be a fantastic doctor.

Elan is still in labor the next morning, she refuses to let the doctor give her any drugs to induce her or speed up her labor. ELan tells Paige that she is going to be a great mom to her baby. She is feeling a little down because she called her mom and she still hasn’t showed up at the hospital. Elan cries to Paige that she misses her mom and she needs her, and she doesn’t want to disappoint her anymore. That is why she is giving up her baby, because she thinks that it will make her mom forgive her for getting pregnant when she was a teenager. Paige tries to give her advice and tells her that she shouldn’t give up her baby just because her mom is mad at her – she needs to make the decision based on what she truly wants.

Hank receives a phone call from Nikki and rushes to her house, Bruce is in bad shape. He is slurring his speech and doesn’t know what is going on – and it is his wedding day. Bruce is rushed to the hospital, he had a blood clot and there wasn’t any blood flow to his brain. Hank explains to Nikki that Bruce is going to need 6-12 months of physical therapy, but no one knows how much mobility he will regain, he could be paralyzed forever. Hank is in shock when Nikki reveals that she doesn’t care, she is still marrying Bruce – the minister is on the way to the hospital.

Down the hall Paige and Evan are with Elan in the delivery room, Evan holds her hand and coaches her through the birth – she has a healthy baby girl. The nurse wraps the baby up and hands her over to Paige and Evan. Elan watches uncomfortable as they coo over how cute the baby is.

Hank meets up with Divya and rants to her about Nikki marrying Bruce, on their way to her grandmother’s funeral. When they arrive Divya runs in to Raj, he has his two kids with him and it is the first time they have seen each other since their break up. He explains to Divya that he just came to support her family, she thanks him for coming.

At the hospital, the baby is taken away to the nursery. Elan tells Paige that she changed her mind and she is going to keep the baby and name her Lenora. Paige tells Elan that she understands and promises that she will be a phone call away if she ever needs her. Elan’s mom finally arrives at the hospital, Paige and Evan watch through the window as Elan introduces the baby to her mother. Paige breaks down and cries but Evan reassures her that Elan keeping the baby is the right thing to do.

Raj pays Divya a visit after the funeral, Divya admits that she misses her grandmother. Raj says that he and Karen agreed that their marriage is over after all – because he is in love with Divya. Divya announces that she is in love with Raj too. He gets down on one knee and asks Divya to marry him and she accepts his proposal.