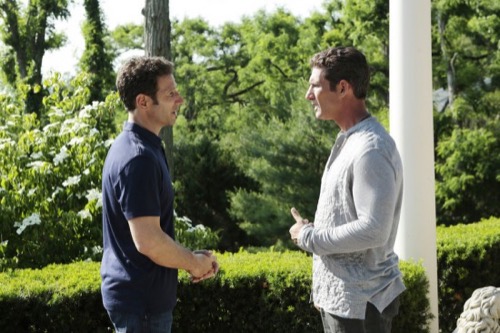 Tonight on USA Network ROYAL PAINS continues with an all new Tuesday, July 7 season 7 episode 6 called, “Secret Asian Man.” We’ve got your recap down below! On tonight’s episode Keller [Michael B. Silver] asks Hank [Mark Feuerstein] for help with an embarrassing medical problem; Divya treats a group of Civil War reenactors who are suffering from an age-old disease; and Evan fears he may be in over his head when he’s roped into a secret project with Boris.

On the last episode, Hank (Mark Feuerstein) went to Manhattan with Olympia (guest star Vanessa Williams), but their time away together wasn’t exactly what he expected. Evan (Paulo Costanzo) feared Boris (Campbell Scott) was keeping a secret from him within the hospital, and a surprise visitor from her past leads Divya (Reshma Shetty) to feel overwhelmed by the men in her life. Paige (Brooke D’Orsay) was eager for her home renovations to be finished and was shocked when she discovered the reason for the delay. Did you watch the last episode? If you missed last week’s episode we have a full and detailed recap, right here for you.

On tonight’s episode per the USA Network synopsis “Keller (Michael B. Silver) calls Hank (Mark Feuerstein) for help when he suffers an embarrassing medical problem, but Hank believes Keller’s new girlfriend may be affecting his health in more ways than one. Divya (Reshma Shetty) treats a group of Civil War reenactors who seem to be suffering from a disease more likely to afflict their ancestors. And Evan (Paulo Costanzo) worries he may be in over his head when he gets roped into a secret project with Boris (Campbell Scott).”

Boris found Evan in the secret OR and, though Evan didn’t wanted to be let in on the secret, he had no other choice when it came to Boris on tonight’s all new episode of “Royal Pains”.

An alarm went off the second Evan found the room. So in order to calm his “friends” who were alerted to the danger, Boris had to come up with a story. He claimed Evan was his security expert pretending to be his hospital administrator and that Evan was going to be taking over for him in the Hamptons.

And, well, what happened next was mostly conducted in a foreign language so Evan didn’t know what was going on until Boris told him he was going on a trip.

Evan was then advised to tell Paige he wouldn’t be coming home. And luckily that didn’t mean forever. Boris had to fill him in about the mystery OR and apparently that was going to take all night and go into the early morning.

See, there is a VIP patient that needs surgery. Only no one can find out that this person is having surgery. So everything has to be conducted in secrecy.

And that means Evan can’t even tell Hank. Hank was naturally suspicious when he walked into Evan’s office and spotted Boris leaving. But unless Evan tells him anything that he remains in the dark.

Not that Hank needed another problem anyways. Jeremiah had disappeared after making a mistake at the lab. And though they eventually found him, Jeremiah still wasn’t in the right frame of mind. He wanted to be alone and he was willing to cut off Divya to do it.

Meanwhile, Divya was seeing an old patient of theirs. Jim is a fishermen but it looks like he has some lofty connections. As in his brother is rich.

Jim lost his share of the family money, yet his brother became even richer. So Jim was bought out of the family home and is only allowed to return there every year for three days. Where he then hosts a civil war reenactment based on actual victory conducted by an ancestor.

However, this year, Jim and another reenactor are experiencing an unusual rash. And after taking a look at it, Divya thinks it could be smallpox.

Smallpox was eradicated but it could still live on certain things like fabric. Or in this case the authenticated blankets and uniforms. So if it is smallpox then it would have been a rare case. Rare enough that Divya was going to use it to draw out Jeremiah.

Jeremiah didn’t care about treating patients. He said he shouldn’t be around other people anymore and that it was a mistake for HankMed to even think he should. So he ignored the case that Divya had so lovingly gift-wrapped and she was left on her own.

Hank was busy getting set up on a double date with his old nemesis Ben. Although it wasn’t so bad. Ben’s hippie girlfriend was funnily enough making Ben sick with all her incenses that actually had weed in them but her sister was all right. A little bit younger than Hank but is kind of put together for some her age.

By the end of the dinner, Ben realized he was having bad reaction to weed and that the flutters in his stomach wasn’t because he was in love. So he knew he had to break up with Helen.

Hank on the other hand knew what he was looking for now. While Helen’s sister is great, she’s not for him and Hank realized he didn’t just want to settle down. He wanted the house and kids with someone that was perfect for him.

And, as he was making peace with that, Boris enlisted his help with the upcoming surgery.

Evan found something off with one of the guys they were working with. So he quickly notified Boris and had him return from Brazil. And with everyone believing Boris to still be in Brazil, he told Hank to meet him at the hospital and prepare for surgery.

Evan proved to be right about the man that felt off and after he got rid of the State Department – Boris told him that he made himself valuable. Meaning he could now learn the identity of whose receiving the operation.

And managed his surprise when he found out Hank was working on a little boy.

As for Divya, her case turned out not to be smallpox. Yet still caused a rift between Jim and his brother. So Jim was wrapping up his reenactment when he began to suffer from an apparent heart attack. Thankfully, Divya was able to act fast but in doing so she forget to take precautionary methods and had later passed out into Jeremiah’s arms after going to see him.

Jeremiah helped her of course though, regardless of what he did, afterwards he didn’t really feel like he could return to medicine.

So Divya is going to keep working on and by helping her she’s already half-convinced him that he’s needed.