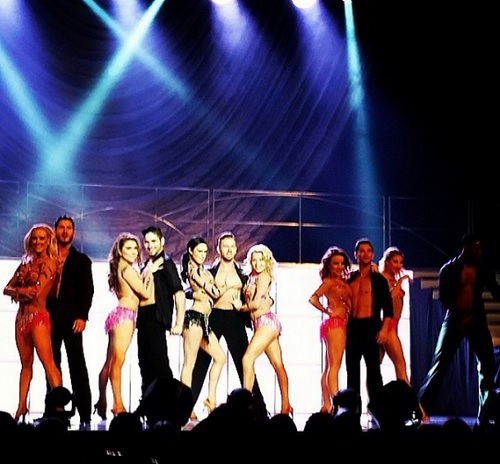 Dancing With The Stars Season 20 winner Rumer Willis learning that taking home the Mirror Ball Trophy has some major perks, like touring with some of the hunky cast of DWTS to do live shows. But how does Rumer’s supposed girlfriend Maeve Reilly feel about all of the hot and half-naked men that Rumer is hanging out with? On June 30, Rumer shared a photo on Instagram of herself posing with two of the members of the 2015 Dancing With The Stars tour – pro dancers Keo Motsepe and Alan Bersten, and they looked pretty cozy!

Just a week prior to sharing a picture of herself in a teeny tiny bikini posing with the two shirtless guys, Rumer Willis was spotted out and about in Los Angeles with her rumored girlfriend Maeve Reilly. Maeve and Rumer laid on the PDA while they partied at Bootsy Bellows and they were even photographed leaving the club together holding hands. Maeve later hopped on social media and gushed about how she and Rumer were “reunited and it felt so good,” and called the DWTS champ her “bae.”

Here’s to hoping that Maeve Reilly isn’t the jealous type because, to Star Magazine, the sexual tension and hotness on the set of the DWTS tour is almost too much to handle. This week’s edition of Star Magazine even teased, “Rumer Willis won’t be going to see Magic Mike XXl, because she is living with the real thing,” when referencing her time on the tour with the other pro dancers. Rumer Willis has always been a bit of a free spirit, and form what we know about stylist Maeve Reilly she seems pretty laid back too – so perhaps she and Rumer have worked out some sort of open relationship arrangement.

What do you guys think? Is it possible Rumer is hooking up with one, or more than one, of the guys she is on tour with? Do you think she and Maeve Reilly are serious, could her rumored girlfriend get jealous? Let us know what you think in the comments below!