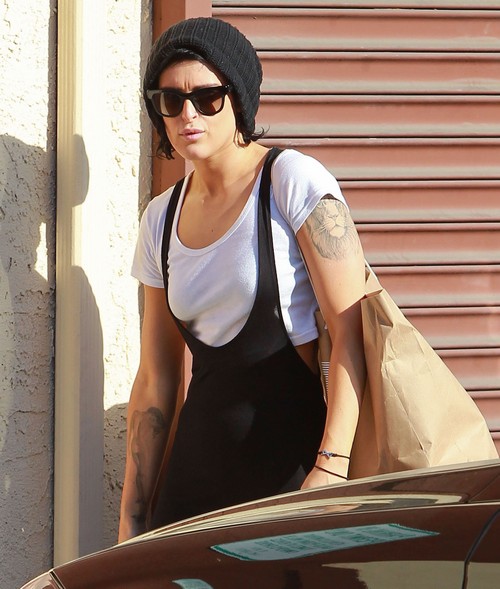 Rumer Willis’ cougar mom Demi Moore is at it again, and trying to steal her Dancing With The Stars partner Val Chmerkovskiy. Demi Moore had her eyes set on her daughter’s dancing partner for weeks, and was reportedly crashing Rumer and Val’s rehearsals just to flirt with the DWTS Casanova. Demi Moore is a cougar, and the only thing she loves more than younger men, are younger men that her daughter Rumer likes. But for the first time ever, Rumer’s crush is giving Demi the cold shoulder and actually choosing her daughter over her – and it is driving Demi insane!

Demi Moore has some serious issues going on, for some reason the insecure 52 year old can’t sleep at night unless she thinks that she is hotter than her daughter Rumer. Over the years Demi has had no problem reeling in Rumer’s boyfriends and hooking up with them, but her charms are not working on Rumer’s crush Val Chmerkovskiy, and it is driving Demi mad with jealousy. Since Rumer debuted her hot new dancing body, newfound confidence, landed a gig of her own, and has Val Chmerkovskiy on her arm – her mother has been slowly spiraling downward and the jealousy is eating her up.

According to Dancing With The Stars insiders, Demi is devastated that Val likes Rumer more than her, and she is making a fool of herself. A source snitched to CDL, “Demi is always popping up at their rehearsals and shamelessly throwing herself at Val. The more he ignores her flirting, the more ridiculous she becomes. It has gotten to the point that she tries to embarrass her own daughter Rumer and make herself seem more appealing to Val. But, Val sees right through her and he actually feels sorry for Rumer that her mom is such a basket-case, which only makes them closer.”

It looks like Demi Moore has finally found a man half her age that she can’t seduce – and it is killing her inside. Demi is about due for another epic meltdown, and Val Chmerkovskiy dismissing her is going to push her over the edge. We’re never shocked by Demi Moore, although we are a bit surprised by Val Chmerkovskiy, we thought his type was anything with a pulse – and it’s a little bewildering that he is not interested in Rumer’s mom. What do you think of Demi Moore’s mission to steal Val from Rumer? Do you think she will be successful? Let us know what you think in the comments below!

Rumer Willis at Dancing With The Stars’ practice in Hollywood, California on April 1: FameFlynet