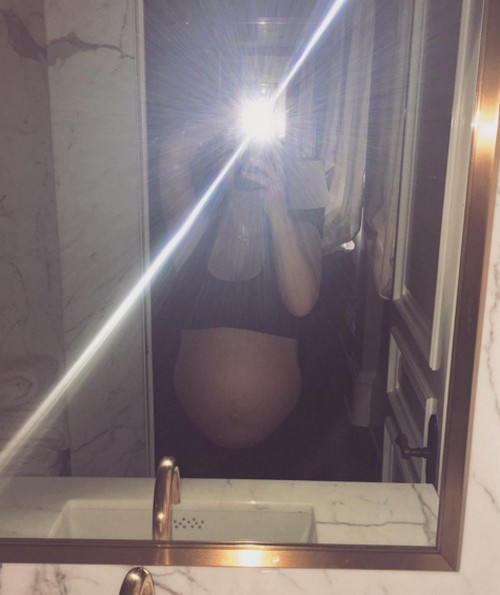 The message was short and sweet, Kim tweeted “SAINT WEST” in all capital letters, followed by a ton of baby emojis. Seeing as how the world has been waiting impatiently for two days now to learn Kimye’s baby name – everyone knew exactly what she was talking about.

Kim Kardashian and Kanye West were very open about their struggles with conceiving, and it’s no secret Kim had a difficult time getting pregnant this time around – she documented her fertility woes on the last season of Keeping Up With The Kardashians.

When Kim and Kanye learned that they were finally pregnant with baby number two, they began referring to their unborn son as a “Saint” – because it was really a miracle that Kim had gotten pregnant. (Not THAT miraculous when you take in to consideration the fact that they had millions of dollars at their disposal – but still impressive).

Saint West has been a frontrunner, and at the top of possible Kimye baby names for quite a while – although the Internet was convinced that Kim Kardashian and Kanye West would go with another direction theme and name their son Easton West, like his big sis North West.

Fortunately for him, Kim and Kanye went the Saint route instead. There is no news on whether or not Saint has a middle name, rumor has it that it may be Robert after Kim’s late father.

What do you think of Kim and Kanye’s baby boy’s name? Do you like Saint West, or are you a little disappointed that they didn’t stick with the compass theme and name their son Easton West? Let us know what you think in the comments below!