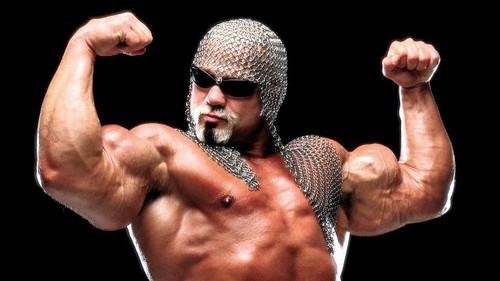 According to a breaking new report, Hulk Hogan’s former wrestling ally, Scott Steiner, has threatened to kill him. And the whole thing didn’t even go down in a ring, it went down in an airport! Apparently, the Hulk’s wife, Jennifer, landed in San Jose for WrestleMania on March 26, and she alleges that Scott Steiner grabbed her at baggage claim and told her that, “plans to kill Terry” as soon as he touches down – Terry Bollea being Hulk Hogan’s real name, of course.

Is this what happens when you have two former wrestling stars who have been taking steroids for years and years and years? The drugs end up getting to you, and you start making crazy decisions. We’re not saying that the steroids and the testosterone definitely have something to do with the death threat, but you don’t see former basketball players going around and making death threats against each other, do you? Then again, maybe Scott Steiner’s hooked on to a new drug that starts making you talk crazy – you never really know with these people.

Anyway, Jennifer reportedly didn’t recognize Scott Steiner and just ended up calling her husband, who flew into San Jose and went with her to file a police report immediately. So much for Scott’s threat of ‘killing Terry’ as soon as he lands, huh?

Now, Scott Steiner’s feud with Hulk Hogan has been well documented over the years, and Scott has been very open about his hatred for the Hulk. According to reports, he even blames the Hulk for the WCW wrestling era ending.

What do you guys think about Scott Steiner threatening to kill the Hulk? Do you think he meant it, or was he just roided up and/or drugged up? Or maybe he was just trying to scare the Hulk’s wife as payback for all the imagined slights? Let us know your thoughts in the comments below.