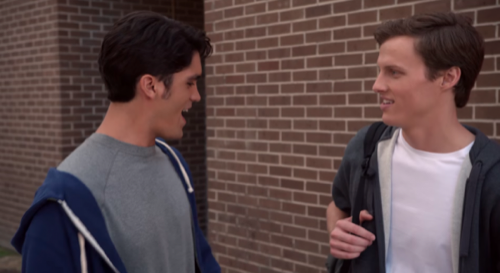 Tonight on MTV Scream airs with an all new Tuesday July 21, season 1 episode 4 called, “Aftermath,” and we have your weekly recap below. On tonight’s episode, A mysterious message sends Emma [Willa Fitzgerald] and Audrey [Bex Taylor-Klaus] in search of answers.

On the last episode, Emma discovered that her mom was keeping additional secrets; and the killer challenged her to a dangerous game. Did you watch the last episode? If you missed it, we have a full and detailed recap right here for you.

On tonight’s episode per the MTV synopsis “Emma gets a mysterious message which leads her and Audrey in search of answers.”

On tonight’s all new episode of “Scream” all anyone wanted to believe the killing spree was over but is it?

Tyler’s body, minus his head that is, was collected from a car crash and inside of the car there was also a Brandon James’s mask. So, when news of this first began to filter through the town, many chose to believe a murderer was dead. And unfortunately these same people would be wrong.

Tyler wasn’t the killer but if the real one wanted to step away from it all then he pretty much used up his only scapegoat.

Luckily, however, this killer doesn’t seem intent on making a run for it and in fact he’s actually courting all the press. First he released the video of Nina’s murder and even after Riley’s death he then taunted Emma with information. He sent her an old yearbook from when her mom was a teenager and he left a note inside.

A note by the way that begs her to investigate it. Though there is one main problem with that because if she’s right about her doubts and the killer is still free then she could be walking into a trap. So Audrey, another person questioning the whole Tyler storyline, warned her about going anywhere alone and chose to follow her to a deserted building.

Sounds crazy but these girls are tired of waiting around for the cops to finally get it right.

Both girls have now lost someone thanks to all of these games and so it’s necessary for them to get to the bottom of it. At least before they end up losing someone else they care about. But, by openly talking about their plans especially in a grieving Noah’s vicinity, they managed to grab his interest.

Poor Noah was left heartbroken after Riley’s death and, in death, Riley has sort of been put on pedestal. Noah feels like she could have been it for him and that someone had robbed him of that chance to find out for himself. So, lately, he’s been drinking.

And so vengeance seemed like a pretty great idea to a drunken teenager mooring his first love. Thus, his take on Emma and Audrey’s conversation was here’s my chance.

He followed the girls to the deserted building and that resulted him in scaring the life out of them. Apparently someone had staged the same place were Brandon original did all of his corrective surgeries into looking like a lair. So there was blood everywhere and the corpse of the same pig whose heart the killer had sent Emma’s mom.

And although he frightened the girls by just showing up out of the blue, Noah was actually handing in figuring the “lair”.

Noah was the one that knew from the very beginning that it was staged and that someone most likely wanted to mess with them. And Audrey played her part by conveniently having an SD card on her when all three found Nina’s laptop. Otherwise known as the same laptop that the police had been looking for.

See the laptop went missing the same time Nina’s body was found. And while the police were left feeling like a key piece of evidence had gotten away, Nina’s friends Jake and Will were the few that took advantage of the news.

Nina along with her friends had been blackmailing people. But Nina and Jake didn’t necessarily need the money. They were just in for the kicks. So with two out of the four partners in this scenario now dead, Jake has been basically harassing Will to keep going.

So an extortion plot is happening underneath everyone’s noses and Emma is the one that goes on to find Tyler’s head.

The head had been stashed at the lair so that was definitive proof that Tyler wasn’t the killer. Though the kids kept what they found on the laptop to themselves. And later when Noah and Audrey were checking it out, they accidentally released a video that was on it to everyone at school.

And the video was of Emma losing her virginity to Will.