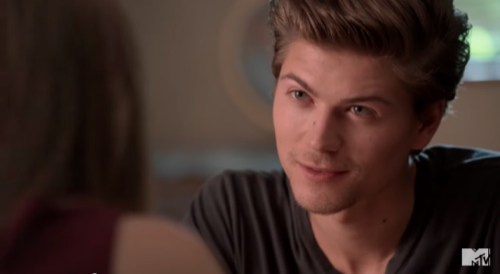 Tonight on MTV Scream airs with an all new Tuesday July 14, season 1 episode 3 called, “Wanna Play a Game?,” and we have your weekly recap below. On tonight’s episode, Emma [Willa Fitzgerald] discovers that her mom is keeping additional secrets.

On the last episode, the death of another teen raises questions; and lead to a rift between Emma and Audrey. In other events, a podcaster arrived in town to report on the past and presented murders. Did you watch the last episode? If you missed it, we have a full and detailed recap right here for you.

On tonight’s episode per the MTV synopsis “Emma discovers that her mom is keeping additional secrets; and the killer challenges her to a dangerous game.”

Emma knows things she shouldn’t on tonight’s all new episode of “Scream” and for some reason she didn’t want to tell anyone about her late night conversation with the killer.

See this mystery caller had told Emma that her mother and most of her friends were liars. They said pretty things to her face and then did horrible things behind her back. So the first place Emma went to was her mother’s lab. There, she was hoping to get some answers to contradict what she heard.

But, unfortunately, she overheard her mother verify everything this caller said. Maggie was talking to Sheriff and she was telling him about Rachel when he asked if she’s told Emma yet about her past. And Maggie’s answer was that she was too afraid to.

So that unplanned stop ended up putting a dent in an otherwise flawless relationship. The trust between Emma and her mother had been broken and there was going to be no way to repair it. Particularly as she now knew Maggie had been lying to her for years.

And oddly enough the only one that seemed to be willing to tell the truth could very well be a killer. So the one person that Emma did manage to confide in turned out to be Audrey. Audrey after all needed to know about Rachel.

Audrey had loved Rachel so if this caller really is her killer then she needed to hear it. And after she and Emma spoke, it was Audrey that came up with a plan of action. Audrey told Emma that she should text this guy. He had already texted her so really he was the one that opened the line of communication.

Then, as they were waiting to hear back from the caller, Emma went looking for answers in regards to her mother.

She later asked Kieran if he could bring some of his dad’s police files to her house and naturally he agreed because of his crush on her. But finding out her mother was Daisy as in the Daisy that Brandon James was obsessed with – didn’t exactly set the mood. In fact all it did was make Emma incredibly angry with her mother.
Emma went on to confront Maggie and sadly she still was getting the answers she needed. So Emma once again looked to the caller for answers but he told her that he controlled their conversations. And if she didn’t get that then he’ll find someone else to play with.

Both Riley and Brooke got texts, supposedly from Tyler, and Emma told them that they had to inform the police. Riley didn’t want to but ultimately she was convinced by her friends. So she heped the police arrange a sting.

Only Tyler never showed up. Someone else claiming to have gotten paid was the one that met up with the fake Riley. And it seems he merely had a message for her.

It was a not with Brandon James’s mask on it with the words “Nice Try”.

Meanwhile Will and Jake were busy digging up money they stashes that they were afraid Tyler would try to get to. It appears that those two were in busy with Tyler and, once he went missing, Will at least tried to shut the business down. But as for Jake, he’s spoiled. And he didn’t want to give up on getting rich even if his dad already gave him everything he wanted.

So the killer has been right. People have been keeping secrets. Especially from Emma. Though the caller didn’t want to hold that against her.

The caller texted Emma again after the cops failed to capture “Tyler” and he gave her another chance to play. See he made her choose between her friends. He told her Brooke or Riley. And because she was so close to where Riley was, Emma said Brooke.

But Riley got a text from Tyler and she decided to leave the safety of the police department to meet him.

So Brooke was fine. Riley however ignored everyone’s warning and ended up dying on the phone with Noah. She had tried to call him for help and yet was too weak to do anything other than give him her last words.

Thus Emma was an unwilling participant in her friend’s murder.