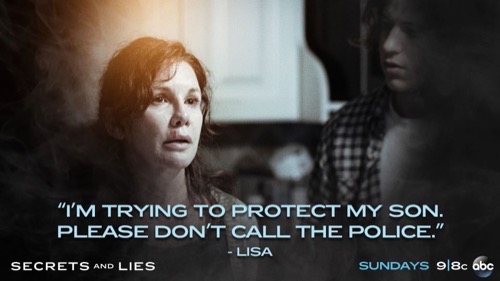 Tonight on ABC Secrets and Lies premieres with an all new Sunday March 29, season 1 Episode 6, called, “The Confession,” and we have your weekly recap below. On tonight’s episode, Ben’s [Ryan Phillippe] unnerved by a vigilante who’s been stalking him, but he rejects any police protection for himself while reluctantly accepting security for his wife and daughters. Staying with his friend Dave, [Dave Fogler] however, isn’t the safe haven Ben thought it would be.

On the last episode, while attempting to help his neighbor’s autistic son Matt Daly, Ben stumbled upon a crucial piece of evidence related to Tom’s murder. This lead Ben to suspect the Daly family of wrong doing and confronted them regarding their involvement in the death of Tom. In doing so, yet even more secrets and lies were revealed on Chelsea Bay Drive. Meanwhile, a new threat emerged in Ben’s life, and it’s far more dangerous than he realized. Did you watch the last episode? If you missed it, we have a full and detailed recap right here for you.

On tonight’s episode as per the ABC synopsis, “The vigilante stalking Ben ups the ante and begins a dangerous game of cat and mouse. Desperate about his family’s safety, Ben begrudgingly accepts Detective Cornell’s offer of protection for Christy and his daughters, while refusing any police surveillance for himself. Having temporarily moved in with his friend and confidante Dave, Ben thinks he has managed to escape Cornell’s laser-like focus for a while, only to find that he is forced to re-live his past mistakes while fighting for his life.”

Tonight’s season 1 episode 6 looks like it is going to be intense so make sure that you tune in to our live coverage of Secrets and Lies at 9:00 PM EST!

Tonight’s episode of Secrets and Lies kicks off with Ben at the parking garage – he was just rescued by the police. He rants that he is innocent and he doesn’t understand why people are coming after him. Cornell reminds him that the public thinks that he killed a child – and they generally spurs this kind of reaction. She offers to have a police detail follow him and protect him, he says that he doesn’t need the police’s help because they are just going to follow him and try to prove that he is guilty.
At home Ben talks to his wife Christy – he has a new theory, he thinks that their neighbor Kevin is the person who is stalking him and terrorizing him. All of a sudden Kevin stopped talking to him, and he used to work at the state’s office so he has resources to send anonymous text messages. The next morning Ben corners Kevin’s wife Elaine at her trash can and wants to know what Kevin’s problem is with her. Kevin comes outside her and Ben scoffs at him “I know it is you.” Kevin snaps back, “And I know it was you.”

Cornell arrives and interrupts their heated debate – Ben shouts at her that he said he didn’t want a police detail. His wife Christy argues that he is not the only one in danger, and the rest of the family could use some protection as well if this is going to continue. Ben gives in and tells Cornell that she wins, and she can leave the police detail at his house for protection.
Later that day Natalie demands to know why there are cops sitting outside of their house – Ben explains that they are there for their protection because someone tampered with his truck. Dave stops by the house – while he is there Ben receives a mysterious text, it’s a recording of Ben and Dave talking about the flashlight in the garage. Dave thinks they should show it to Cornell – but Ben says they can’t because it will incriminate them. Dave and Ben rush back in the house when they realize that it must be wired, they find the bugs and call the police. Cornell is curious – she wants to know how Ben knew that there were bugs in his house. He gives her permission to search the house for more bugs and storms out – he announces that he is going to go stay at Dave’s house until the police straighten it out. If the guy comes after him again he doesn’t want to be home because he doesn’t want his family to be in danger.

At Dave’s house – he rants to Ben that if he hypothetically had a murder weapon at his house, the best place for him to dump it would be in the woods on the way to his brother-in-laws house. Ben scoffs that if he hypothetically had a murder weapon to dump on the way to his brother-in-law’s house then he couldn’t dump it with his wife and kids in the car. They sit down to eat and Ben confesses that six years ago his wife had an abortion – and she made the decision all on her own. David can’t believe that he didn’t tell him – Ben explains he just had to deal with it himself. Ben remembers the day that Christy told him and then left with the girls – he got drunk and went to the 4th of july block party and he met Jess and hung out with her for the first time.

There is a knock on the door – it’s Jess, she says she stopped by to make sure Ben was okay and she needed to talk to him. Jess rambles that she feels responsible for what is happening to him, he tells her that he can’t deal with their drama right now because he has someone stalking him and he is the main subject in their son’s murder. Jess storms out and Ben chases after her – but she drives off in to the night. While Ben is walking back in to the house Kevin walks up behind him and pulls a gun on him – he orders Ben to get in his car with him.

Kevin takes Ben to an abandoned building and puts a black bag over his head and ties him up – he takes a high pressure hose and begins to torture Ben and spray him with it. Ben screams at Kevin that he “has it all wrong.” Ben screams that he didn’t kill Thomas – but Kevin isn’t buying it. Kevin starts to cut Ben’s clothes off him with a knife and tells him about his time in the service, he says he has to ask Ben a few questions. He demands to know when the last time was that he got a full night’s sleep. Ben refuses to answer and continues saying that he is innocent, so Kevin begins beating him. Finally Ben agrees to answer his questions – he says he is going to start with questions that he knows the answer to so that he can tell when he is lying.

Kevin continues to torture Ben and asks him when he stopped liking him – Ben says it was when he was at the cook out for 4th of July and he and Jess slipped away to get more charcoal together. Apparently Kevin saw them having sex through the window. Kevin scoffs that it is disgusting that Ben “screwed a soldier’s wife while he was off protecting his country.” Kevin says that Ben took advantage of Scott being away – he slips up and says his wife Elaine’s name instead of Jess’s. Ben realizes that Elaine did the same thing to Kevin when he was away in Kuwait and that is why he is acting so crazy.

Kevin marches Ben out by the river with a gun, and orders him to start digging. He tells Ben that he can stop digging when he is ready to tell the truth about Tom’s murder. Ben stalls and Kevin beats him – he gives in and drops down on his knees and begins digging with his hands. Ben taunts Kevin and the next time he swings to hit him Ben fights him off and knocks him down on the ground. Ben grabs Kevin’s cell phone and begins running around trying to call 911 – but there is no signal because they are in the middle of nowhere. Just when the phone finally gets enough signal to connect to 911, Kevin catches up to him and points the gun in his face and makes him hang up.

Kevin marches Ben back down by the river and orders him to keep digging – Ben still insists that he is innocent and he didn’t kill Tom. Ben tells Kevin that he would rather be shot than admit to killing his own son. Cornell emerges and orders Kevin to drop the gun, the officers with her arrest Kevin and take him away in handcuffs while he grumbles that there is no justice.

Cornell explains to Ben that they knew it was Kevin the whole time, but they couldn’t prove it – so they put a tracker on his phone and had to wait for him to make a move. After getting checked out at the hospital Ben heads home to his wife and kids, Dave is there waiting for them. Ben sits down to have pizza with his family and they all fawn over him after his big ordeal with Kevin. Ben grumbles that he isn’t hungry and walks out – Dave follows him to check on him. Ben reassures Dave that he is going to be okay, and says that he can’t talk about it. Ben confesses that he is ashamed, his son is dead and he turned himself in to the victim.