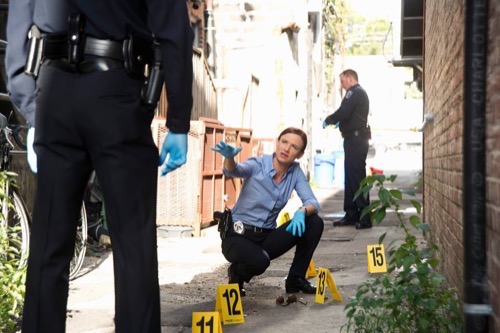 Tonight on ABC Secrets and Lies premieres with an all new Sunday April 12, season 1 Episode 7, called, “The Cop,” and we have your weekly recap below. On tonight’s episode Ben [Ryan Phillipe] talks to a prison inmate and wonders if Cornell is abusing her authority, so he plots to turn the tables on her with an assist from Fenton, but an anonymous tip makes Ben the prime suspect once again, which pushes the Crawfords to their limits.

On the last episode, The vigilante stalking Ben upped the ante and begins a dangerous game of cat and mouse. Desperate about his family’s safety, Ben begrudgingly accepts Detective Cornell’s offer of protection for Christy and his daughters, while refusing any police surveillance for himself. Having temporarily moved in with his friend and confidante Dave, Ben thought he had managed to escape Cornell’s laser-like focus for a while, only to find that he was forced to re-live his past mistakes while fighting for his life. Did you watch the last episode? If you missed it, we have a full and detailed recap right here for you.

On tonight’s episode as per the ABC synopsis, “Ben (Ryan Phillipe) visits a prison inmate who provides information that might prove Detective Cornell (Juliette Lewis) is pushing the boundaries of the law. With the “help” of Arthur Fenton, Ben attempts to bring Cornell down, but an anonymous tip puts the spotlight back on Ben as the prime suspect, and the Crawford family finally collapses under the strain.”

Tonight’s season 1 episode 6 looks like it is going to be intense so make sure that you tune in to our live coverage of Secrets and Lies at 9:00 PM EST!

All along it seems that sleazebag journalist Fenton has only ever wanted to go after Cornell. Apparently writing a story about Ben and the salacious details Ben found out about his neighbors was just a mere cherry topping for him. But the real prize on tonight’s all new episode of “Secrets and Lies” is and has always been Cornell. And just to make it clear it’s personal for Fenton.

A while back, Fenton was working on a story and according to the way he tells it someone must have gotten their wires crossed because they thought he was a cop. And technically that’s illegal. So Cornell ended up arresting Jim for it and he had serve time afterwards.

But jail wasn’t the only thing Fenton had to face.

He lost his career and any respect in the journalist world for what he did and it seems that no one wanted to hire him after he got out. So he’s been a freelancer ever since and covering stories featuring Cornell has kind of become the highlight of his life. However Ben’s case was different and Fenton wants to use that to his advantage.

See, Fenton alleges that this isn’t the first time that Cornell has hounded or some would say harass a suspect and so he enlisted Ben into helping him find dirt on the otherwise clean detective. Because she was clean on paper. Some would even say quaky clean seeing as she has the highest arrest rate in her whole division.

And yet Ben found out that Cornell was capable of just about anything to see justice done. Particularly as she had actually arrested her own daughter for a crime. However there was another side to the detective that Ben later saw for himself.

It seems there was another case with a dead child and the man accused of the murder had never been arrested.

So that man tried to move away and start again with his family because like Ben – once accused, always suspected! But Cornell never allowed him or his children to forget. She literally followed him to every time his family moved to and she would always question neighbors about whether or not they’ve seen him with any little girls.

And eventually, he finally had enough. So in essence Ben believed Cornell hounded this man to death and because he was afraid the detective might one day do that to him as well – he told Fenton the story. And as it turns out Cornell wasn’t wrong but Ben was for going to to a journalist with the story.

Apparently, the accused’s son knew this entire time, for a fact, that his father targeted children but when the older man died – he hoped it would all go away. And that his family would be allowed to forget. So he was later angry at Ben for stir things up again.

His father was dead and the only one the truth was going to get was a family that had tried to move on.

And after Ben destroyed yet another family, he started to reevaluate a few things. Though, unfortunately, it was much too late to protect his family. Christy had had enough and when Ben refused to admit to why he was recently back out in the woods – she packed up the girls and went to go stay at her brother’s.

So feel sorry for Ben. He had to say goodbye to his family tonight and it all happened because he knew that if he told his wife he was getting rid of the murder weapon – even though he still claimed to be innocent – she would have left anyway. No one, besides best friend Dave that is, would have believed him if he had turned that flashlight in. Plus later Ben had good cause to doubt his own innocence when Cornell showed him footage from a cab of him heading off to Jess’s house on the night Tom was murdered.

Subsequently, Ben doesn’t remember that part and so he nothing to refute it. And after everything that’s happened, it came as a blow for Ben when he had to wonder if he killed his own son and simply chose to black that out.