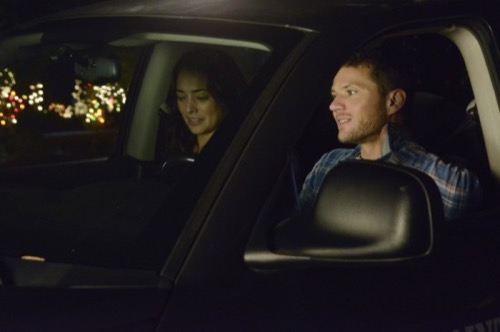 Tonight on ABC Secrets and Lies returns with an all new Sunday April 26, season 1 Episode 9, called, “The Mother,” and we have your weekly recap below. On tonight’s episode, Ben’s [Ryan Phillippe] discovery in the attic makes his relationship with Christy  [KaDee Strickland] even more tense as she continues to keep him from seeing the kids, though he does get to spend some time with Abby at a Christmas fair. Meanwhile, Cornell [Juliette Lewis] returns to the crime scene looking for clues after a leak at the crime lab makes most of the forensic evidence unusable.

On the last episode, Ben retraced his steps on the night of Tom’s death with help from Dave in a desperate attempt to counter video evidence uncovered by Cornell that could be proof of his guilt. Meanwhile, the Crawfords’ marriage continued to disintegrate, and the turmoil was having a devastating impact on their kids; and Ben’s lawyer conceived of an alternative theory of the murder. Did you watch the last episode? If you missed it, we have a full and detailed recap right here for you.

On tonight’s episode as per the ABC synopsis, “Ben’s (Ryan Phillippe) discovery in the attic further exacerbates his tension with Christy (KaDee Strickland), who, to make matters worse, continues to keep the kids away from him. When Ben finally does get some much needed father-daughter time with Abby (Belle Shouse) at the Christmas fair, an unwelcome guest changes the course of the evening. Meanwhile, after the leak in the crime lab left most of the forensic evidence in Tom’s case unusable, Det. Cornell (Juliette Lewis) refuses to sit idly by and wait for everything to be re-tested. She returns to the crime scene, hoping to find something new to drive her towards an arrest.”

Tonight’s season 1 episode 9 looks like it is going to be intense so make sure that you tune in to our live coverage of Secrets and Lies at 9:00 PM EST!

After last week’s episode, Cornell finally believes Ben didn’t kill Tom. But unfortunately ruling him out as a suspect means she now has to start from scratch.

So, tonight, Cornell is reviewing everything. She’s taking a second look at the evidence and she wants to see if she missed anything with the initial investigation. And as it turns out she did. Because it seems this entire time the police have been wrong about their crime scene.

They thought they should only look at where Tom’s body had been found when in actuality they should have looked a little further as in down by the river.

New evidence shows that whoever took and eventually killed Tom originally wanted to drown the little boy. It’s well-known that the child was afraid of the water and was still learning to swim. So Cornell was right when she said the killer knew the child but she was wrong about the sex of the offender.

Drowning is typically a female crime. So whoever killed Tom is a woman and knew the boy very well. And funnily enough this plays into Dave’s theory. See, Dave has never liked Christy but that truly isn’t the reason why he now suspects Christy.

Christy had a window of opportunity and she had just found out about her husband and Jess on the night Tom died. So it wouldn’t be unheard of for a woman that had been cheated on to strike out against her person that she had felt hurt her. Which in this case would be Jess.

And Jess didn’t love anyone more than she did her son.

So Dave thought Christy could be guilty, Ben’s lawyer thought they should throw Christy to the police, and later Cornell stopped by Christy’s brother’s place because she believed Christy’s alibi was shaky. And it was shaky. Christy used her lover as an alibi but, here’s the thing, they’re both a little confused over what time he came and left the house.

Though Christy isn’t exactly the only woman that was in Tom’s life. He did have a mother after all. And Ben has recently found out some troubling things about Jess.

Jess is apparently bi-polar and when she’s been off her meds then she’s been known to get violent. According to her sister, Jess has never hurt anyone or herself when she flies off the handle but, despite her assurances to Ben, the sister failed to mention her sister’s condition to Cornell. So Ben was left wondering about what to do with what he found.

He knows Jess is sick but still doesn’t erase the fact that there was a picture at her house where she’s wearing the coat he both found and later mysteriously lost.

That coat had blood on it at the time and whoever took must have known that it could have been as a crucial piece of evidence. Thus Ben has no other choice than to believe Jess might have hurt her son. Though, technically, she wouldn’t have been in the right mental state to know what she was doing if she did.

However, before Ben could say or even thinking saying anything to Cornell, Abby went missing.

Christy had called Ben because she thought their daughter could have runaway to go be with her dad but he claims he hasn’t seen her. And the last time he did see her – she was upset with him.

Earlier, Ben took Abby to the fireworks display and although it was only supposed to be the two of the – he ended up bringing Jess along so that the other woman wouldn’t be alone. And, well, his daughter didn’t like sharing her dad with someone that wasn’t her mom. So she made her feelings about Jess pretty clear and afterwards she accused her dad of no longer caring about her.

So, when Abby went missing, Ben immediately confronted Jess. He wanted to know if she hurt his daughter.

But, as for Cornell, she thinks she found who killed Tom and she now has the evidence to prove it.