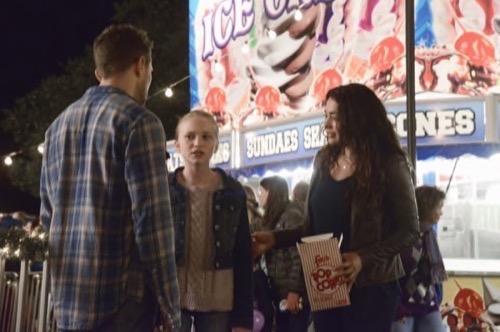 Tonight on ABC Secrets and Lies returns with an all new Sunday April 19, season 1 episode 8, called, “The Son,” and we have your weekly recap below. On tonight’s episode, Ben [Ryan Phillippe] retraces his steps on the night of Tom’s death with help from Dave in a desperate attempt to counter video evidence uncovered by Cornell [Juliette Lewis] that could be proof of his guilt.

On the last episode, Ben (Ryan Phillipe) visited a prison inmate who provided information that might prove Detective Cornell (Juliette Lewis) was pushing the boundaries of the law. With the “help” of Arthur Fenton, Ben attempted to bring Cornell down, but an anonymous tip put the spotlight back on Ben as the prime suspect, and the Crawford family finally collapses under the strain. Did you watch the last episode? If you missed it, we have a full and detailed recap right here for you.

On tonight’s episode as per the ABC synopsis, “Ben retraces his steps on the night of Tom’s death with help from Dave in a desperate attempt to counter video evidence uncovered by Cornell that could be proof of his guilt. Meanwhile, the Crawfords’ marriage continues to disintegrate, and the turmoil is having a devastating impact on their kids; and Ben’s lawyer conceives of an alternative theory of the murder.”

Tonight’s season 1 episode 8 looks like it is going to be intense so make sure that you tune in to our live coverage of Secrets and Lies at 9:00 PM EST!

Ben no longer has a choice about the night in question. It seems if he doesn’t remember what happened the night his son Tom died then he’ll most likely be charged for murder.

It’s unfortunate but, sadly, that’s how bad things have gotten for Ben. And according to his very own lawyer his innocence isn’t an issue anymore. What little evidence Cornell has in addition to public opinion could very well mean the end for Ben. Especially if the DA knows how to tell a story because hearing about a man that is capable of murdering his son just to cover up an affair would be all the jury heard from now until the trial.

So before things can go that far, Ben tried in one last attempt to get answers. And he went to an unexpected source to do so. See, he went to Jen and asked her if she knew anything and the two of them haven’t spoken since their big fight. Hence by going to her he was showing how desperate he was and luckily she saw that for herself and didn’t try to hold what happened against him.

But, regardless of their concessions, she didn’t know anything he didn’t. And after their little talk failed to pan out, someone did finally come through for him. Because his friend Dave showed up with the one piece of good news he’s had in a long while – Dave had the flashlight.

Dave, apparently, was the one that collected Ben’s flashlight from the forest before the police could find it. So the two of them were able to destroy the evidence before it could be used against him. And once they were finished with that, Ben then decided to be a little reckless. He went to go visit his daughters at their uncle’s home and that was after his wife had already told him he wouldn’t be welcomed.

Thus it wasn’t a surprise when Christy refused to admit him into the house. So the only ones that suffered were his children who had to watch them arguing in the front yard. And see their mother actually threaten to call the police on their father. So that one trip, that was supposed to make them feel better, ended up hurting him family more than it would if he had just stayed away.

And afterwards Ben realized that even his best friend had hurt him in all of this. Because despite helping him getting rid of the flashlight, Dave was also the friend that had drugged Ben on the night his son was murdered.

Thankfully, Ben chose to not to throw that relationship away but all the same he was still hurt to figure out the real reason he doesn’t remember anything that happened. So Dave figured out a plan that would hopefully help Ben and get his friend to forgive him. And that was to retrace their steps.

Ben couldn’t remember, what with the drugs in his system, so basically doing everything he did before should jog a few memories. And you know what it did. Ben remembered getting drunk and he also recalled getting violent.

But in the end he knew he didn’t kill his son. Though he now knows why Cornell would suspect otherwise.

On the night, everyone wants to know about, Ben was showing everyone in the bar a picture of his son. The one he would have had with Christy if she hadn’t terminated the pregnancy. So after he realized that, Ben could understand why Cornell would assume he knew about Tom prior to his death. Yet he had a reason for everything he did that night and he wasn’t afraid to report it to Cornell the next morning.

See, after he stopped showing people a picture of his wife’s sonogram he then called Jess and tried to warn her about his wife. The same wife that had earlier figured out that her husband had slept with Jess. So when Ben didn’t get her on the phone he decided to stop by her house in order to warn her in person. However that too didn’t work out because she was asleep. Their son on the other hand was very much awake.

So Ben tucked Tom in that night and he also replaced the tooth underneath Tom’s pillow with a ten dollar bill from the tooth fairy. But that was it. That was all the interaction he had with Tom that night and after he made sure the boy had fallen asleep – he returned to his own home to sleep off what he thought was a hangover. Hence he’s innocent.

Later, Ben’s lawyer told him he found out where the check he got for representing Ben came from and as it turns out it came from his wife Christy. But here’s the thing Ben knows they don’t have that kind of money. So where did Christy get her hands on it and why is their lawyer telling him she’s probably hidden even more than that.

Christy paid off the lawyer with a cashier check for twenty-five grand and when Ben got home from the police station he then started digging around and found even more money hidden inside a secret compartment in the walls. Now Ben doesn’t want to go accusing her of anything but if his lawyer is suspicious about Christy than finding out she’s been hiding thousands has made him question how much he really knew his wife.