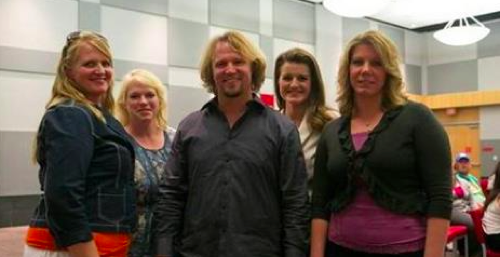 TLC’s reality show Sister Wives returns tonight with an all new Sunday October 18, season 6 episode 6 called “Robyn’s Big Announcement,” and we have your weekly recap below. On tonight’s episode, the adoption of Robyn’s kids nears as the Browns sign the official papers with their lawyer.

On the last episode, Kody planned a bonding trip to the beach with his five youngest daughters after admitting he had better relationships with his sons. Meanwhile, Madison’s plan to join the Mormon church hit a snag; and Meri made a decision about attending therapy with Janelle to improve their strained relationship. Did you watch the last episode? If you missed it we have a full and detailed recap right here for you.

On tonight’s episode as per TLC’s synopsis, “the adoption of Robyn’s kids nears as the Browns sign the official papers with their lawyer. Meanwhile, Meri sees a doctor to discuss her recent weight loss; and Christine and Kody have another session with a marriage counselor after their trip to Texas.”

The adoption is going ahead tonight. Robyn’s ex had signed off for Kody to officially adopt their three kids and the Browns’ attorney had told them that all they had left was the formalities. Which was just waiting for the judge to sign off but the attorney hadn’t been worried about that part. He didn’t see any reason why the judge would deny them after everyone had come into some form of agreement.

So after they received the news, Robyn couldn’t wait to tell her kids. She told them that adoption was waiting on a single signature to happen and that their birth certificate was going to change as well. Though that kind of threw the Browns when they heard.

They knew the kids’ legal documents were going to have to change but the birth certificate came as a special surprise. And it had Robyn in tears. Now that Kody was going to be officially be listed as her older kids’ father, she felt like everything was finally coming together.

However Robyn was still left felling a tad nervous about announcing her pregnancy to the family. That’s right, Robyn is pregnant again and she was hoping the second time around would be a lot a different than when it was with Solomon. With Solomon, the older kids weren’t exactly happy to find out about a new baby and there was simply too many things going on at the time for Robyn to actually celebrate her pregnancy.

So Robyn chose to tell her own kids first about the new baby. She made the decision in case the other kids weren’t in the mood to hear her news. And she said she wanted to at least enjoy a few minutes where everyone around her was happy with her.

But something does look like it’s going to come in the way of this joyous time for the family. Meri has been having stomach pains and so she’s constantly been seeing the doctor in order to find out what’s wrong. And the last doctor sent her to her gynecologist because apparently they were some concerns. Like whether or not Meri had cervical cancer.

Meri though took the news amazing well. She didn’t fall apart and she didn’t ignore the situation. But she refused to let a what-if take away her joy. And later she was the one that announced Robyn’s pregnancy to the family.

Robyn had been anxious and so Meri offered to step in because that’s who Meri was. And the family took the news really well!

It was completely different than when Robyn announced her first pregnancy. Like that time no one complained about there already being too many kids in the family. They were just happy and absolutely everyone had an opinion about the name and the sex.

The majority were rooting for a girl though that didn’t stop anyone from offering boy names. Such as Maverick, Jackson, or Hash to count a few. Yet little Truely did come up with a pretty good name for a girl. She suggested Charlie and that would make the potential baby sister Charlie Brown.

However there was on more possibility circulating – twins. Twins was something new and after they saw how the idea pretty much freaked out Kody – everyone was on board with having them. Including Robyn who said she did start showing faster and getting morning sickness a lot sooner with this pregnancy than she did with Solomon.

So that created an actual concern and everyone had been waiting for the first prenatal check-up. But luckily only one child was detected and unless there was another baby hiding behind a kidney then Robyn is going to have one baby. Whose name will be decided at a later date.

And in the middle of this great time, there was one more thing that happened. Christine and Kody finally sat down with their therapist to discuss that rock building exercise. And Kody realized that when Christine didn’t feel listen to or validated then she didn’t feel loved. So that’s one thing he knows now that he has to work on.