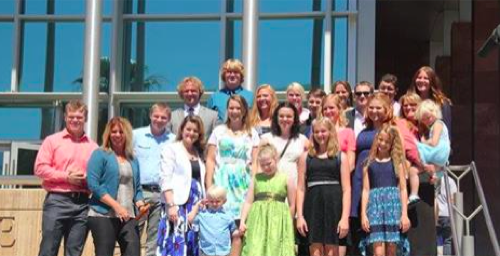 TLC’s reality show Sister Wives returns tonight with an all new Sunday October 25, season 6 episode 7 called “A Judge Decides,” and we have your weekly recap below. On tonight’s episode, a court ruling is expected and will determine if Kody can adopt Robyn’s three oldest kids.

On the last episode, the adoption of Robyn’s kids neared as the Browns signed the official papers with their lawyer. Meanwhile, Meri saw a doctor to discuss her recent weight loss; and Christine and Kody had another session with a marriage counselor after their trip to Texas. Did you watch the last episode? If you missed it we have a full and detailed recap right here for you.

On tonight’s episode as per TLC’s synopsis, “a court ruling is expected and will determine if Kody can adopt Robyn’s three oldest kids. Meanwhile, Janelle’s oldest daughter, Madison, makes a surprise announcement.”

Kody adopting his wife Robyn’s kids from her first marriage was actually a long drawn out process. Frankly it took up almost to a year before they could go before a judge and by then Meri had stopped feeling like she too was part of the process.

As many of you will probably recall, it was Meri’s idea to legally divorce Kody so that he could legally marry Robyn and then have a better chance at adopting Robyn’s three kids. However it seems like Meri didn’t fully think her actions through and, while she would never say she regret what she did, she has expressed a feeling of being of disconnected from her family. As in she’s happy that the kids will become legally Browns but the divorce she thought was going to be ceremonial began to feel like something else. And unfortunately for Meri, she just couldn’t put a word to it.

You could slowly see her become disinterested, over time, in their meetings with their adoption lawyer. And she looked almost in tears when she was discussing her divorce. Albeit in her confessional. Yet what appears to be Meri’s biggest problem is that she’s bottling these feelings.

Meri hasn’t turned to any of her sister wives for support and she hasn’t chosen to talk to her own husband. So what Meri did was cut herself off. And odds are that’s probably what led to her mistake further down the line. If she felt like she couldn’t talk to anyone in her family then an outsider would feel the perfect choice.

But fortunately the rest of the family were in good mood and they weren’t afraid to share what they were feeling with each other. Janelle and Kody’s daughter Madison particularly had some good news of her own that she wanted her family to know. Apparently she had been seeing Caleb Brush, he was her late uncle’s brother-in-law, and the two have become serious. So a wedding could very well be around the corner.

And the best thing about that is that Kody doesn’t seem to mind. Like sure he still views Madison as his little girl but he likes Caleb. Plus he didn’t have a problem with the ten year age difference so ultimately Madison has given the approval of her family.

So really it was a good time for the family and the court date for the last part of the adoption was turned into a full family affair.

The kids came home from college and all the wives implanted a strict dress code. Meaning the little one were all dressed up in suits and dresses. And if it was any other family then it could be said they were wearing their Sunday Best.

And just before they got to the judge, their lawyer had to openly ask Robyn and Kody questions. Such as whether or not they were legally married? And if they had the children’s cooperation in regards to the adoption?

Questions they had already gone over but that needed to be stated again in front of a judge. And then when the judge handed them his decision, it was like he simply said “ok”. As if he had no misgivings whatsoever about the children being officially adopted into a polygamous family. Though that was the family’s biggest concern for the longest time.

Yet the judge signed off and that was it. Robyn’s eldest son was of an age to officially sign off and he had done that days before. So all that was really left was a family photo. First Kody took one with his new kids and Robyn and then he had the rest of the family all join them.

And now there one big happy family.

Or better yet that’s what Meri wanted them to believe. She wasn’t happy and she grew unhappier by the day. And sadly no one knew.