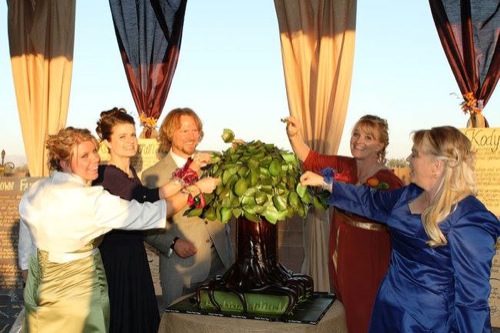 TLC’s reality show Sister Wives returns tonight with an all new Sunday January 11, season 5 episode 11 called “A Family Meltdown” and we have your weekly recap below.  On tonight’s episode the Browns begin a road trip to meet another polygamist family.

On the last episode, Janelle sought a therapist to discuss a sensitive matter involving her and one of the other wives. Meanwhile, Mykelti and Madison prepared to graduate from high school; and Dayton had surgery to repair an eyelid damaged in an ATV accident. Did you watch the last episode? If you missed it we have a full and detailed recap right here for you.

On tonight’s episode as per TLC’s synopsis, “The Browns begin a road trip to meet another polygamist family. They check in on Christine’s mother who has plans of moving to Vegas. Next, they visit their old home in Utah and are overwhelmed by past emotions. And Kody does something to upset one wife.”

The Brown family is on the move. The family is taking yet another road trip and this time they’re making several stops along the way. Ultimately, the adults are going to be visiting old friends of theirs in hopes of reeling in a possible investor and while they’re out on the road the family will also be stopping by another polygamous family as well as having a much needed visit with Christine’s mom.

Christine’s mom has a whole house though she doesn’t have any kids left at home and she’s there for the most part all by herself. So the older woman has become a bit lonely what with her grandkids all spread out. She doesn’t have anyone to dote on and frankly she’s tired of taking care of a lawn. And essentially looking after a house – again by herself.

That’s why Kody and Christine decided they wanted her to move in with them. That way Christine’s mother could be around the grandkids more often and Christine wouldn’t have to worry about her mother having accident when she’s alone. But having another woman come into the picture is going to be hard. And there’s just no other way around that!

The stop by Christine’s mom’s place was to see how much things she’ll be taking with her. Which by the looks of it is going to a lot. Yet Christine’s mom has her own worries. She feels like the adults should set up some boundaries so that she’s not stepping on Kody’s toes all the time.

And while they were on the topic, Christine said that although her mother was going to be living with her from now on –she didn’t want the other woman to take sides. She said her mom was only going to be entering the picture as an observer when it comes to her marriage.

So let’s how long that last!

Meanwhile, the family took the time to stop by their old house and that seems to have stirred up a lot of old emotions. Some of the kids were definitely sad to see their old home nearly gutted. Then on the other hand there was Christine and she was one of the few that wanted to rush out of there the second she saw the house. That’s how bad she felt after seeing the place they all had to flee.

However, a visit with Ken Grant (one of Kody’s oldest friends) riled her up more than the house could. The family’s original plans had fallen through and so Janelle suggested they go see Ken seeing as he was located nearby.

And, well, Christine still hasn’t forgiven Ken for his off the cuff remark, Earlier Ken had texted Kody that he should divorce three of his wives and come back to the traditional Mormon Church. And Kody being Kody – he shared this text with his wives and no one had liked it. But Christine had taken what Ken said as a personal insult.

Hence, she’s not going to let it go until she gets her apology and that’s something Kody doesn’t feel like he should ask for. He’s has plenty of people in his life that doesn’t like his marital situation yet he lets it go. So feels like Christine should do the same.

And when she doesn’t do this but chooses instead to throw what he feels like is a tantrum – it makes everything tense between them.

Christine grew up within a polygamous lifestyle so she sees people like Ken as natural enemies. From a very young age, Christine and other kids in the church were taught to fear Ken and his life because they had the power to split up families. And as for Kody, though he understands where his wife is coming from, he doesn’t want to ask for an apology because that hurts his pride. It makes him feel less than. Like he has to get his wife’s permission to hang out with an old friend and that’s why he’s pushing Christine so hard to let this whole thing go.