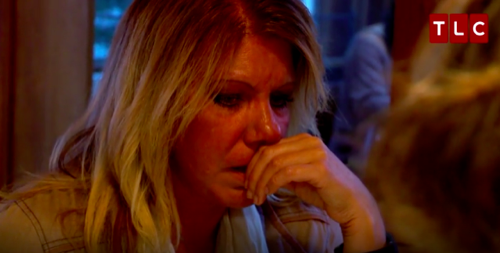 TLC’s reality show Sister Wives returns tonight with an all new Sunday November 15, season 6 episode 10 called “Meri Catfished” and we have your weekly recap below. On tonight’s episode, the Browns are in Alaska doing activities such as dogsledding and deep-sea fishing, but a pregnant Robyn can’t stand the smell of raw fish.

On the last episode, the Browns went to Alaska with an entourage that included Logan’s new girlfriend. Meanwhile, Kody and Robyn revealed their baby’s gender. Did you watch the last episode? If you missed it we have a full and detailed recap right here for you.

On tonight’s episode as per TLC’s synopsis, “the Browns are in Alaska doing activities such as dogsledding and deep-sea fishing, but a pregnant Robyn can’t stand the smell of raw fish. Meanwhile, Logan and his girlfriend go on a double date with Madison and her boyfriend, who later asks Kody for a private chat; and Meri admits she’s been involved with a man online who isn’t who she thought he was.”

The Alaskan trip was going really well when on their fifth day of their vacation, Logan and Madison took their significant others out to lunch to discuss their families.

As we’ve come to learn, it isn’t always easy to be raised in a polygamist family but there are certain things the neither Logan nor Madison would trade for the world. After all they got to grow up with four mothers and sometimes Janelle wasn’t the one they would turn to if they needed help. And that was ok because they lived in a polygamist family.

But dating in their adult lives was later an issue. Logan, himself, found out the hard way that there were girls out there that would just assume he would want to be a polygamist himself because that’s how he grew up. And even Michelle his current girlfriend said that was one of the reason she didn’t think she would pursue things with him.

Meanwhile Madison once had a boyfriend in high school who thought it was ok to date someone else because he felt Madison would be fine with it. So at some point or another both Madison and Logan had to firmly deny wanting their parents’ lifestyles for themselves before they could see where they’re going in a relationship or possible become serious. Although that’s not nothing against their parents.

In fact both Logan and Madison have sometimes wonder whether they’ll be enough as parents in a two parent home for their own kids. And Madison had also said she was worried. But Caleb has only ever known one mom so that’s a part of her life he can’t understand.

Yet he wants to. In the same he wants to marry her because on tonight’s episode of “Sister Wives” Caleb finally asked Kody for permission to marry Madison. And Kody couldn’t be happier for them.

He likes Caleb and he believes the other man will be good to his daughter. Plus it didn’t hurt when he found out that Caleb could cook. Caleb had brought in some fish that he wasn’t afraid to gut himself and he was pretty impressive on the stove.

Thought the smell of fish did make Robyn gag and she was kind of stuck in the bathroom till the fish was finished.

And luckily Robyn was able to recuperate because Meri had something to say to the family. Later the parents had all gone out together and they were having a pretty good time. However Meri felt her news couldn’t wait so she had to burst the bubble they were in.

So she began talking to them about her feelings and it seems she’s confused about where she fits into the family. And she believes it might have something to do with the empty nest syndrome that she had been going through.

Only Meri didn’t tell them at the time why she felt she had to push them away. Like how she began talking to people online and befriended someone in particular who portrayed themselves as being truly understanding. Only for that relationship to backfire and have Meri then left feeling as if she had been targeted.

See, Meri didn’t say any of that. She just told them that they might wake up one day and find her suddenly gone. And the reason for that is because she feels she could protect them from the fallout of her relationship if she were to distance herself from the family.