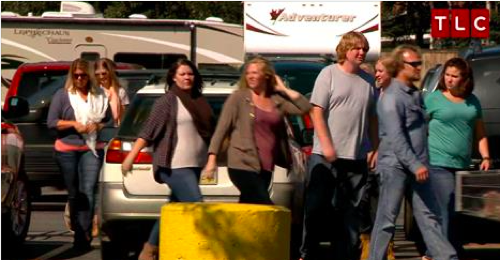 TLC’s reality show Sister Wives returns tonight with an all new Sunday November 8, season 6 episode 9 called “A Boy or a Girl?,” and we have your weekly recap below. On tonight’s episode, the Browns go to Alaska with an entourage that includes Logan’s new girlfriend.

On the last episode, the Browns threw a party to celebrate a judge’s recent decision that allowed Kody to adopt Robyn’s three oldest children, and it turned into a big event for several dozen people. Did you watch the last episode? If you missed it we have a full and detailed recap right here for you.

On tonight’s episode as per TLC’s synopsis, “the Browns go to Alaska with an entourage that includes Logan’s new girlfriend. Meanwhile, Kody and Robyn reveal their baby’s gender.”

On tonight’s episode of “Sister Wives”, the Browns were heading to Alaska for a vacation and it seems like they wanted to use the experience to get to know the kids’ significant others.

Logan’s girlfriend Michelle and Madison’s boyfriend Caleb were both going on the trip. Although Kody just had a feeling apparently that Caleb was going to use his time in Alaska to talk to him about Madison. And possibly discuss where their relationship was going in terms of marriage.

So the Alaska trip was going to be a big deal. However with so many people, the older kids had at least suspected that there were going to be a few things that wouldn’t go to plan. They had sat down beforehand with the cameras and weren’t embarrassed to admit that they were actually expecting something to go wrong.

Yet there were no problems during the packing stage or when they were busy arranging all the cars. No, the problem occurred when the Browns got to the house in Alaska and Garrison had taken issue with the way the adults were treating his younger brother Solomon.

Garrison who was Janelle and Kody’s son had been hanging around when he saw that Solomon who was Robyn and Kody’s had balled his hands into fist as if he was going to hit one of their sisters. So for some reason Garrison took issue with that when no one had gone out of their way to explain to the toddler how wrong he was for doing that. Instead they had told him “no” and had just picked him up for a comforting hug. And Garrison felt the adults shouldn’t have coddled Solomon.

Hence he tried to point out to his mom and later to his dad that they were all taking it too easy on Solomon. Which he didn’t think was right despite Solomon only being four. And so, like suspected, Kody didn’t appreciate one of his older sons’ interference. He said he was the parent there and that he could parent his own kids without his other children’s “help”.

And though Garrison didn’t agree with him, he dropped the issue once he realized he couldn’t change his father’s mind with his advice.

But, luckily, the next few days passed quite easily and before they knew it Caleb had showed up to join them on their trip. And Caleb turned out to be just as good of a guy as Maddison promised. He didn’t take it personally when Madison’s family kind of gawked at him as if he was something new and shiny.

They eventually began to talk to him but the problem with polygamous families was that Caleb didn’t just have to prove himself to Janelle and Kody. He also had to make a good impression on Meri, Christine, and Robyn as well. And the sister wives were all using different criteria to judge him by.

Christine who’s a romantic at heart wanted to hear from Caleb how his feelings for Maddison came to deepen over time while Robyn was more an observer. Robyn wanted to use the days in Alaska to study how Caleb would really fit in their family and if that was honestly a goal of his. So she was waiting for him to ease up and drop the poker face.

However Madison felt sure in her relationship and often Kody found himself getting looks from her if he was trying to talk to Caleb about marriage. Marriage being something Madison wanted Caleb to come to on his own without anyone else’s input. So it was interesting household with Caleb as a sudden addition.

And the only person missing out was Hunter. Hunter was away at Air Force Academy Prep School and so he was in limited contact with his family. But when he got the chance to call in, Kody and Robyn decided to use the opportunity to announce their baby’s sex and it turns out they were having a girl.

Everyone had pretty much hoped for another girl so the news was taken very well. And although the Browns began getting the feeling that their trip in Alaska was going to be the last time for everyone to be together for a while – Alaska was shaping out to be a really great trip.